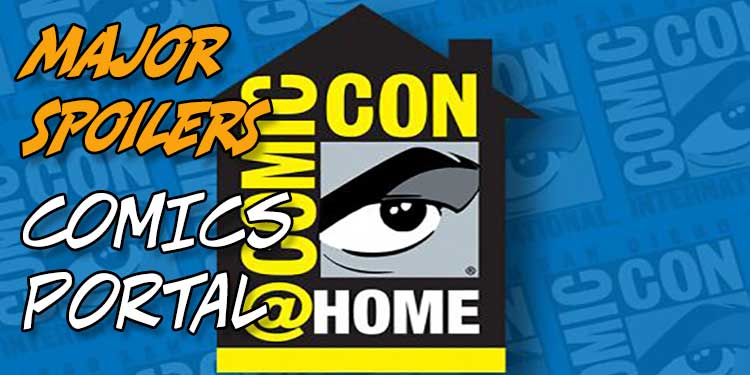 As per usual, MajorSpoilers had the best San Diego Comic Con coverage around! But it was a very different kind of SDCC this year! It’s been Comic Con @Home 2020!

Normally, I’d have been talking up SDCC for weeks in this column by now. Not this year.

I’ve been to several San Diego Comic Cons in the past. The first one I went to, it took me a week to recover from. A friend told me I should have been “in training” for it by walking more and more every day. I didn’t listen to him, obviously.

SDCC has grown into one of the very best cons in the world. You name it, it’s got it. Creators. Promos. News. A massive dealers area and Artist Alley. Crowds. Costumes. What’s not to love? However, this year, thanks to the pandemic, conventions are happening virtually or not at all. So, SDCC has gone digital, and it took place July 22 through 26! More than 350 events! Online panels, often professionally put together, were the order of the day.

Also, many of the other familiar events were all there, including a costume contest, a huge list of exhibitors (even with a floor plan as if we were in San Diego), the Eisner Awards, a 132-page downloadable souvenir book, online movies and other presentations, and many other happenings… all available for viewing on your home computer or mobile device.

First thing I have to say is, Wow! I’ve been to some other recent online conventions, but they weren’t even in SDCC’s league when it comes to providing programming! Most con organizers have been just putting their toes in the water to see if they can make it happen. SDCC dove in full tilt, and then some! It was reminiscent of my previous SDCC experiences in person in that I couldn’t possibly begin to get to it all! Typical of SDCC, I guess!

As I previously mentioned, the panels and such were often very slick in that there were little to few problems in the presentations. Yes, once in a great while, the Internet connection wasn’t all that great for a person or two on a panel, but mostly things went smoothly as silk! I’m sure they could give pointers to other virtual cons on this one! Zoom must have made a fortune this weekend!

My favorite panels included the DC Comics ones, many of them divided into several smaller discussions so everyone got a chance to say something, and the Bugs Bunny 80th Anniversary celebration. The Image and IDW presentations were very good as well. The Saturday Morning Cartoon panel, first run on Saturday morning (appropriately enough), was fun. And you could watch them when you wanted instead of having to stand in line for hours, then sitting through panels you had no interest in so you could be there when YOUR panel finally started.

The list of exhibitors was also huge. When you clicked on the name of a company or a seller, you were often sent to a page that highlighted three of their wares. Then you could click and go further, getting to a page that had a maximum of 12 items on it. If you were like DC, however, your link took you directly to their website.

The souvenir book, which focused on 100 years of Ray Bradbury, was an extensive read. Ads and columns and art and stuff—it was something I’ll have to finish later because it was so big!

I have to say that I didn’t miss the crowds of people, often stepping on my feet or bumping into me on a very regular basis. I also didn’t experience that much stress because the panels were accessible even after their original run time. Nice!

The art show was run on Tumblr, and it all seemed well organized. I’m not much for art, honestly, but it all looked cool!

The costumes were on display through photos taken at home, obviously. I enjoyed most of them, but I did miss seeing Chef Vader walking around with Jar Jar Binks’ head on a platter, though.

Hey, you could even print your own badge if you wanted to! And it saved me literally hundreds and hundreds of dollars I would have had to spend for a place to stay, transportation, food, and purchases. Well, maybe I still missed that.

As much as I enjoyed the very professional panel presentations, I missed the audience participation and the spontaneous reactions while dealing with the unexpected. Of course, there were no crowd reactions to funny lines, so it was often good that there were several panel members on most presentations so they could respond to funny lines and such. Still, believe it or not, I missed the audience during those times. And when the creators were sitting alone in their homes, it was kind of eerie.

When it came to the vendors and exhibitors, I was totally dependent on clicking on names I recognized or was intrigued by. When I wander the floor in person, I get to see things that grab my attention. This way, I didn’t get that experience. I also missed that.

Despite the often-crowded conditions, I also missed getting together with friends I see only at SDCC. Maybe next year.

If I had to give Comic Con @Home a grade, it would be an A. They greatly exceeded my expectations and gave us so much entertainment that I couldn’t possibly get to enjoy it all. After all, isn’t that what SDCC is all about?

What do you think? Has SDCC set the standard for virtual cons? Are virtual cons here to stay? What did you think of Comic Con @Home? Did you get to participate? Whatever your opinions, please share your thoughts in the space below!