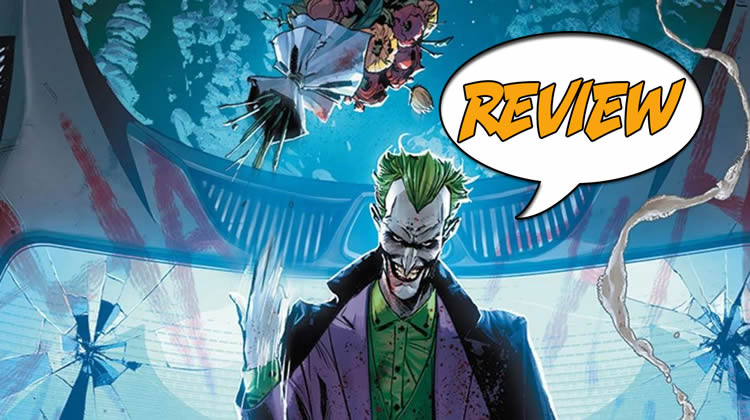 The Joker War is underway, and wow, is it gripping! Check out this review of Batman #95 from DC Comics.

SOLICITATION: It was always going to come to this. The Clown Prince of Crime and the Dark Knight Detective go head-to-head for the last time. The Joker has never wanted to win before, he’s never wanted his battle with Batman to end, but now his motivation has shifted. He has decided that one way or another, this will be the final chapter to their story. “Joker War” begins here!

“WHERE DOES HE GET THOSE WONDERFUL TOYS?”

One of the staples that takes place when Batman fights the Joker is that the Clown Prince of Crime is impressed by the arsenal that the Dark Knight has that he can fight with. In the Batman film, the Joker said, in fact, “Where does he get those wonderful toys?”

It’s one of those ideas that, when you come across it, you go, “Why didn’t I think of that?” It’s so obvious at that point, but it really isn’t that way to those of us who aren’t story writers, myself included. The scary part of all this is that the Joker now knows who Batman is under the cowl, and that has let him shred all that he’s previously had against him. Yes, Joker once developed his own utility belt of sorts, but now he’s actually turning Batman’s “wonderful toys” back on him! Yikes!

This multi-part epic kicked off in Batman #95, and it was a comic I couldn’t put down. Hey, even when I was done reading it, I wanted to know what will happen next!

One of the most interesting parts of this epic has been the introduction of Punchline, the “new” Harley Quinn, as some people are calling her. She gets involved in all this on a despicable level, turning Batman’s own hideout into a vulnerability. More than that, I won’t spoil, but the way this issue ended was stunning!

Along the way, the Joker takes every opportunity he can to torment Batman. Lucius Fox gets hit with Joker venom. Legal action is taken against the GCPD to keep them on the sidelines. The Batmobile gets hit with a missile. And Batman even comes across a costume he knows nothing about! Weird!
The story moves at quite the frenetic pace through the issue. Batman is back on his heels through most of it, and it’s odd to see the Dark Knight when he’s NOT in command of every situation. And Alfred, who’s supposed to be dead, shows up at the beginning and end of the issue. What’s up with that?

I really enjoyed the art in this issue. Appropriately enough, things are dark and moodier than usual, believe it or not. And Batman’s expressions are not his usual confident ones. In fact, the only one in the whole city who seems to be happy is the Joker himself. Nicely done!

As I always say, those facial expressions are critical to us getting into the story, and that is so important in this issue. The action sequences are cinematic, too, so this whole issue feels like it’s a big-budget blockbuster of a film! Even the colors work tremendously well!

BOTTOM LINE: Where No Bat Has Gone Before!

I never expected DC to go where this storyline is heading—the Joker holding all the cards, so to speak, and Batman having only to rely on his wits and not his arsenal. It’s very disconcerting, and it’s like an auto accident. I just can’t take my eyes off it!

The thing I can’t help wondering is, though, what will do they AFTER this story? I mean, what CAN they do after this? Well, that may be Mr. Tynion’s best card up his sleeve… setting up something even worse, though it’s beyond me just what he might have in mind! All I can do is keeping buying and keeping reading Batman’s stories! They rock! And I don’t have any idea how this Joker War will finally end up, either, and for a long-time comics reader, that’s pure pleasure!

I never expected DC to go where this storyline is heading—the Joker holding all the cards, so to speak, and Batman having only to rely on his wits and not his arsenal.