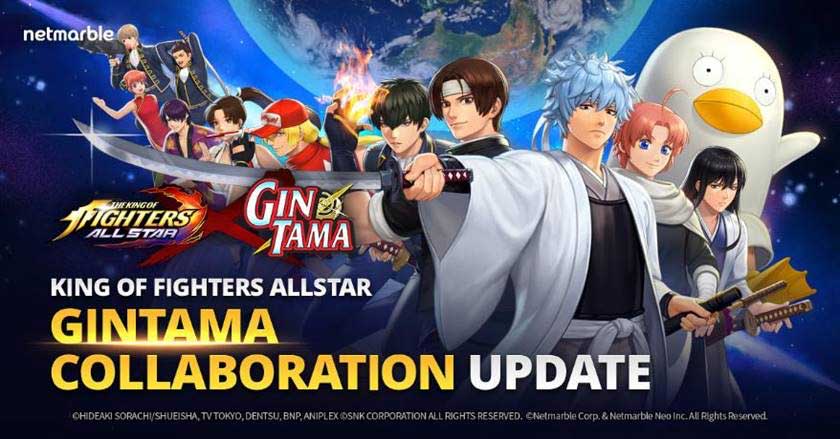 The world of Netmarble’s THE KING OF FIGHTERS ALLSTAR is becoming even more lively and hilarious as an all-new collaboration featuring the world-renowned manga and anime series Gintama brings 10 new characters including the main hero Gintoki, from the franchise into the game. The crossover will run from now until August 13.

New characters featured in the latest collaboration include Gintoki, Kagura, Kondou, Okita, Hijikata,Takasugi, Katsura, Elizabeth, Kamui and White Yaksha Gintoki Sakata! These characters, along with their associated Battle Cards, can be acquired and additional features including new dungeons through the Gintama Collaboration.

As part of this update, several in-game events themed after the series are now also open for players to complete and earn rewards. Especially, Gintama Attendance Event and Kagura’s Super Missionoffering Elizabeth and Kagura, the most iconic characters of Gintama are available, and so many other collaboration events are ongoing till August 10 and 13.

In addition, other in-game events are held to commemorate the 2nd anniversary of THE KING OF FIGHTERS ALLSTAR launch. From July 28 to August 26, the 2nd Anniversary Attendance Event will also be held. Through this 21-day event, players can earn up to 50 Battle Card Summon Tickets and 1 FES Fighter as rewards.

THE KING OF FIGHTERS ALLSTAR boasts fast-paced fighting action as players battle through waves of enemies, giant bosses and rival fighter teams. The excitement is paired with cutting edge graphics, bold colors, and lightning-fast animations. In addition, this game features all of KOF’s classic fighters from ’94 to XIV, with over 130 fighters available to collect, along with more to come with seasonal events, collaborations with popular IP such as TEKKEN 7, and additional content updates for players to enjoy.

THE KING OF FIGHTERS ALLSTAR is available to download on Google Play and the App Store in over 175 countries and comes with support for English, Taiwanese, Indonesian, Thai, Spanish, Italian, French, Portuguese, Russian, and German languages.

Established in Korea in 2000, Netmarble Corporation is a top developer and publisher pushing the boundaries of the mobile gaming experience with highly innovative games including Lineage 2: Revolution, The Seven Deadly Sins: Grand Cross, Blade&Soul Revolution and MARVEL Future Fight. As a parent company of Kabam, and a major shareholder of Jam City and Big Hit Entertainment, Netmarble strives to entertain audiences around the world with a variety of mobile games based on its powerful franchises and collaborations with IP holders worldwide. More information can be found at http://company.netmarble.com