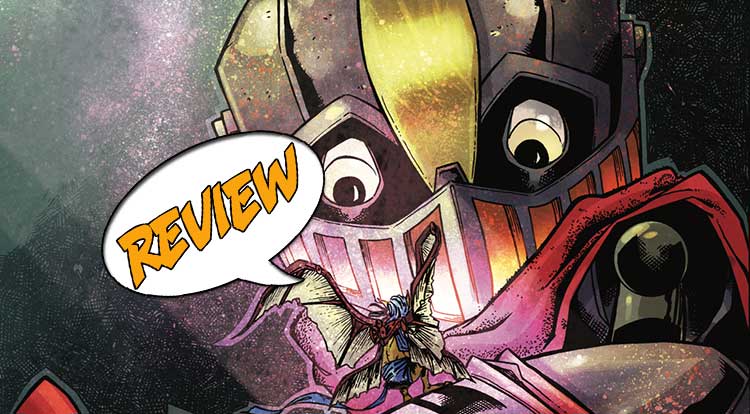 Canto and the Clockwork Fairies Review

Canto’s daring to be a hero was the spark that helped his people achieve freedom. What adventures await as they make their way to a new land? Find out in Canto & the Clockwork Fairies from IDW Publishing! Previously in Canto: The little hero with a clockwork heart reached the Emerald Tower and faced down the Shrouded Man, only to learn that there were no hearts to rescue, that there was no fairytale happy ending. Canto fights him anyway, is injured, and is carried away by Zixia. He awakens with the Elder bending over him, back where he started. But it has changed – his people have overthrown the slavers and have decided to make the trek back to their homeland.

ONE DAY AS THEY CAMPED NEAR RUINS…

Canto & the Clockwork Fairies is a one-shot story that takes place as Canto’s people are on the move. As it opens, Canto is playing hide-and-seek with his Malorex in some ruins when they hear a voice calling for help. It is coming from underground, and the Malorex fearlessly leaps into the dark. Canto follows and he finds an underground room lit by lanternlight and full of cages of all sizes. The Malorex is caged and fast asleep.

Canto finds who was calling for help. In a smaller cage is a small, winged person who explains that “She” has clipped their wings and replaced them with clockwork. Who is the mysterious woman? She arrives shortly, a green-skinned hag with clockwork legs. She is curious and wants to “enhance” the Malorex. Canto challenges her and she strikes out with magic, knocking him out.

When he comes to, he is chained to the wall near the Malorex who is still asleep, magically asleep, the fairy tells him. But maybe she can help. She sings a song about the sun rising and awakening the world, and the Malorex wakes up. He breaks out of his crude cage and snaps the chains that hold Canto. Canto frees the fairy, and she insists they free the others. The hag has captured dozens if not hundreds of them and taken their wings. Canto does, and they make their way to freedom clinging to Malorex. But he doesn’t stop there. One of the hag’s traps captures a small creature, and when she goes to collect it, Canto is there to confront her.

It’s a sweet interlude in the overall tale, and a good one-shot introduction to Canto that captures some of the flavor of his world.

Canto & the Clockwork Fairies covers some new territory in the world, and it is really pretty to look at. Starting with the ancient and overgrown ruins, we instantly feel that this place has a history, and perhaps so long a history that some of it has been forgotten. Beneath it, the hag’s cave is partially shorn up, like an old mine, and partially a huge open cavern. It feels tight and closed in, until we get the full panel reveal of all the fairies she has captured, which is a towering series of rough, hanging cages.

Canto is an interesting fellow. It’s hard to tell how mechanized he is and whether there is any part of living creature within his mechanical shell. His helm completely covers his face, and all we see of it is a pair of large, expressive eyes. It’s an interesting effect, and those eyes and Canto’s body language do all the heavy lifting of communicating his emotions. I love the striking contrast of his bright red cloak, symbolic of him as a hero, but mobile enough that it is almost an extension of the character.

Canto & the Clockwork Fairies is a nice little heroic tale just big enough to reorient us to the world and its characters. It has its moments, but overall it’s less dark than the main story has been. It’s perfect for a summertime read.

Canto and the Clockwork Fairies