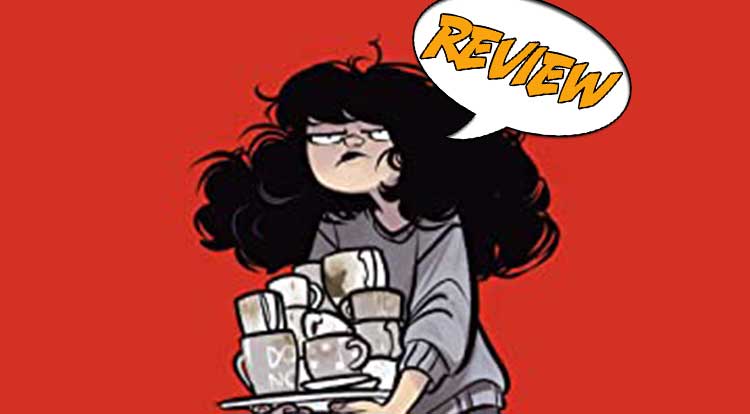 Civilian consultant to the Police! Well, kind of. How much detective work can Lottie do while still technically in custody? Find out in Wicked Things #3 from BOOM! Box.

Previously in Wicked Things: Teen detective Lottie Grote is in police custody as a suspect in an attempted murder, and the other teen detectives in town have nothing good to say about her. She goes through the emotional highs and lows of coming to grips with the fact that this is a serious situation – and that solving this case may not be so easy for her as a suspect. The Police Commissioner takes her aside and has a proposal – they can let her loose, although still very much in custody, and she can help them handle this…if she follows the rules.

Wicked Things #3 sets the scene with Rick at home with his wife. She’s telling him of their dishwasher problems; he’s already having nightmares about Lottie Grote.

Lottie wakes up in her crappy room with a window that doesn’t open, looking out beyond the razor wired fence toward freedom. She casually explores in search of breakfast with caution that quickly flares into curiosity. She finds the kitchen and makes herself toast and jam, only to come face to face with another resident, a huge muscular man who tells her in no uncertain terms that the jam is his. He absolutely terrifies her.

But it is hard to keep Lottie down. She is taken to the police station and given her badge. Of course, she imagines a classic police badge, not a lanyard with a “civilian consultant” card in it. She is all ready to be part of the police team, only to be relegated to making tea for them all. On her way to find the kitchen, she spots an unoccupied computer and hops on, taking a few notes. Computer consultant Dan Chan spots her and offers to show her the way to the kitchen, where he asks why he’s been told not to give her a PC or any internet access. She also finds out  that he is super excited about the release of a new high-tech phone the following day. Rick finds her and makes short work of the conversation by telling Dan that she is a dangerous felon.  Her first day is not quite what she imagined.

She gets back to her residence where she gets her ankle bracelet and Bulldog confronts her about stealing his jam that morning. She doesn’t expect that he’s made a new batch of jam and gives her a jar of her own, which is really sweet.

The next day, she starts puzzling through the notes she managed to jot down about local crimes. Or she tries to but keeps getting interrupted to fetch tea for people. By the end of the day she blows up at Rick, begging him to let her help and insisting she has found a link between three seemingly unrelated cases. He turns her down. A chance remark by Geoff, though, and she does see a plot to steal a shipment of the new phones that are being released the next day. Rick quashes her. Does she have a lead on something, or is it all her imagination?

The art in Wicked Things #3 is so fun. It is particularly delicious to watch Lottie bounce between slowly dying of frustration to the excitement of the chase. Always incredibly expressive, in this issue she hits new heights – and sinks to new depths. The melodrama is played for laughs and is delightful. I particularly like her second day of fetching tea, seeing her day get worse and worse, and her imagination projects her as still being stuck there when she’s elderly. Although, despite it all, she is still precise, and she can remember exactly how everyone likes their tea.

And all around her, Lottie provokes reactions. Some of the police are charmed by her; others are skeptical or distrustful. A few others enjoy taking advantage of her and putting her down. I like that, as they work, they return to being businesslike, seriously working their jobs. This book has a lot of humor but has not lost sight of the thread of seriousness.

BOTTOM LINE: SUCH A FUN READ

Wicked Things #3 shows us that beneath the angst, Lottie is a clever young woman. Her stubbornness and boundless determination make it easy to root for her while enjoying her foibles.