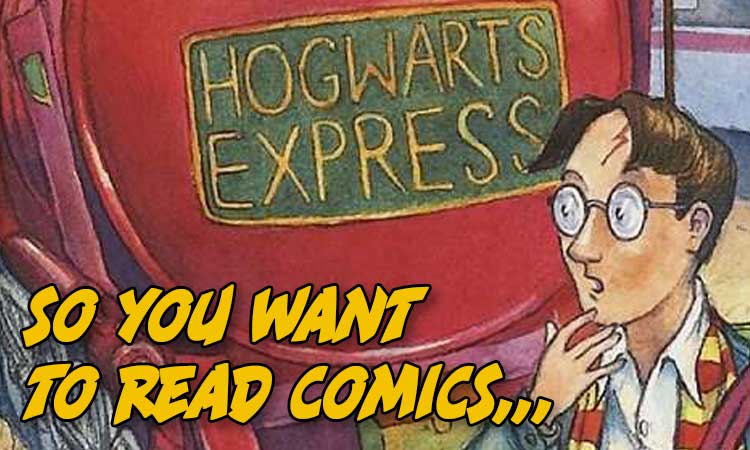 So You Want To Read Comics: Harry Potter Edition

Grab your wands and throw on your house colors, because it’s time for another installment of “So You Want To Read Comics”.  If you’re not familiar already, this is a weekly feature where we recommend a couple of comic books for newcomers based on their interests. This week, we’re offering up suggestions right to you dear Harry Potter fan.

Coming out in 1997, the first Harry Potter book became a huge success.  It wasn’t long until the tale of The Boy Who Lived and his magical school became an unstoppable pop culture juggernaut.  Films, toys, movies, radio dramas, even theme parks, anything you could think of had Harry Potter’s name on it.  Everything except comics, oddly enough. But, that’s not to say there aren’t some comics out there that might do the trick.

So, whether you just like stories about magic, or you have a reason to maybe be done with Hogwarts, these comic suggestions are for you.

You can purchase this book via comiXology

One of the best parts about the Harry Potter books and movies is seeing these kids in their own little secret world of magic.  Places like Diagon Alley, Hogwarts, and The Burrow are these amazing locations hidden away from the real world where shenanigans and adventure exist.  Now take that idea and apply it to the equally magical world of high school theater and you have The Backstagers.  This comic is about Jory and his new friends who work the backstage for the high school theater program.  The twist is that the backstage is actually a portal to a strange, abstract, dangerous, and magical world and it’s up to The Backstagers to keep it all in check, while also making sure to put on a great show for the snobby actors.  This one is a twofer, it’s a shoutout to all those theater kids out there as well as a wonderful fantasy that manages to merge the truly magical with the imaginative ways that kids dress up the mundaneness of school.

While a lot of people focus on the Hogwarts side of Harry Potter, there is another story going on there.  One of Harry learning about his parents and fully understanding the legacy he carries with him.  That’s where Namesake comes in.  This is the story of Jordan, a man whose parents abandoned him as a child.  The thing is, his parents come from two different worlds. One from our world and another from a magical world.  One day Jordan receives a package, his fathers’ urns, and a quest to spread the ashes in the magical world.  What follows is a tale of a man learning about himself, his family, and the relationship between his parents that led to him becoming an orphan.  Now, Namesake is a bit more mature than Harry Potter, so maybe not let the young ones in on this one.  But what it lacks in whimsy and lightheartedness it makes up for it in being a strong tale of magic and self-discovery.

Did these recommendations conjure up positive feelings and a newfound interest in comics? Do you have suggestions of your own? Let us know in the comments section below.