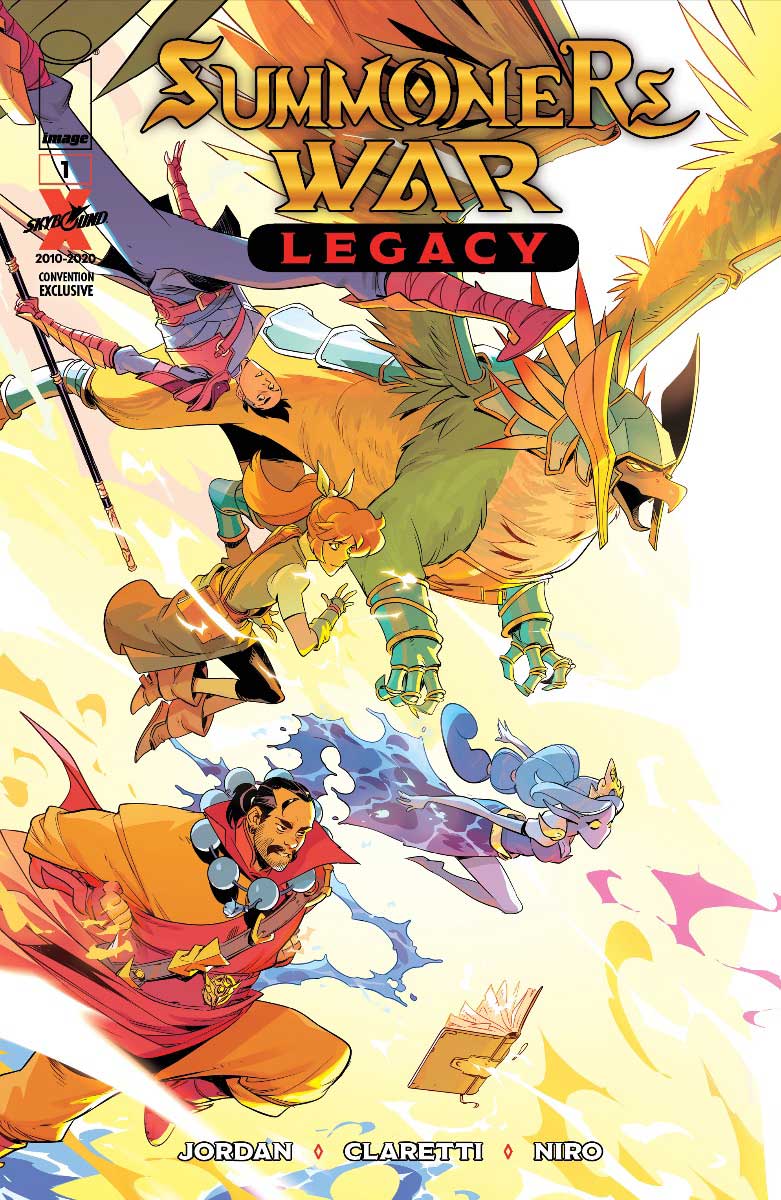 Fans who pre-order now will receive a “Con Exclusive” version of Summoners War: Legacy #1 for $10 USD, a special gold-foil issue that also comes with a redeemable in-game reward voucher for 200 Gems and three Scrolls. The con exclusive serves as a sneak preview into the larger Summoners War: Legacy comic book series, which will be published through Skybound/Image in the future. Available for pre-orders now.

With 32 pages of story and seven pages of additional material, Summoners War: Legacy takes place 35 years before the universe-shattering conflict at the mobile game’s center. The comic series features fan-favorite monsters, explores the fate of Durand’s parents, and expands on the mystical land of Alea and its colorful characters including Abuus, Rai, and Tomas. This riveting addition to Summoners War canon brings a rich lore to the franchise and draws new connections to the upcoming Summoners War games and the Summoners War: Sky Arena game that fans know and love.

“Summoners War is one of the world’s top mobile games thanks to its rabid fanbase, roaring esports community and a rich in-game universe, so we’re expanding the IP into new frontiers by partnering with Skybound Entertainment on our first official comic book series, Summoners War: Legacy,” said John Nam, VP of IP Strategy Department at Com2uS. “Our friends at Skybound are a powerhouse of imagination and a perfect partner for helping Com2uS grow Summoners War in new directions.”

ABOUT SKYBOUND ENTERTAINMENT
Skybound Entertainment is a multiplatform content company that world-builds across mediums including comics, television, film, tabletop and video games, books, and more. The company works closely with creators to bring their stories to a wider audience through various forms of storytelling. Skybound is the home of notable properties including The Walking Dead, Invincible, and Outcast. On screen, Skybound holds a first-look television deal with Amazon Studios and a first-look movie deal with Universal.

Also under the Skybound Entertainment umbrella is Skybound North, the Vancouver-based office expanding the company into animation and the children’s space; Skybound Games, the home of tabletop and videogames alike; and GammaRay, a video creation and curation brand focused on pop culture and presented by Skybound. Skybound is also a partner in Skybound Galactic, a television studio with the capabilities to finance the development and production of scripted series.

ABOUT COM2US
Established in 1998 and headquartered in South Korea, Com2uS operates internationally with offices in the United States, Germany, Japan, Singapore, Taiwan, China, Thailand, and Vietnam and became a subsidiary of GAMEVIL in 2013. The mission is simple. As a leading developer and publisher of mobile games, they thrive on creating games with a level of depth and engagement rarely experienced on mobile platforms. For more information about Com2uS and their portfolio of groundbreaking mobile games, visit: www.com2us.com.

ABOUT SUMMONERS WAR
With over 100 million downloads, Summoners War has ranked #1 grossing in RPG games in 122 countries (App Store) and in 97 countries (Google Play) since its launch in 2014. Featuring over 1,000 monsters and 5 different attributes, Summoners War provides a unique RPG gaming experience players are able to enjoy anytime, anywhere. Summoners War also expands outside of the mobile realm with its community focused events, animated shorts, and much more! Follow Summoners War on Facebook, Instagram, or Twitter to get the latest updates!