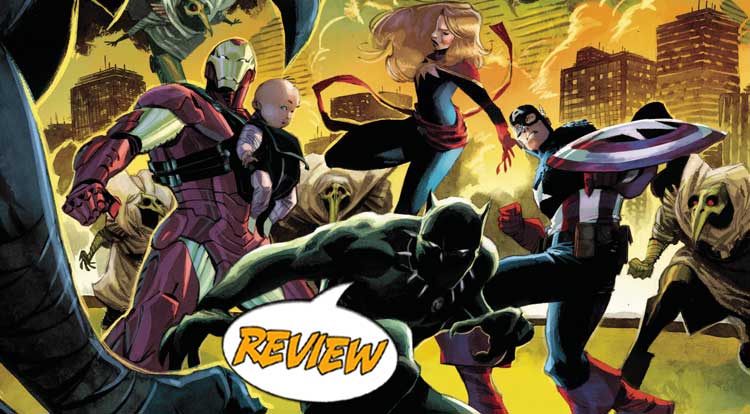 Earth’s Mightiest Heroes have fallen.  But what is Khonshu’s endgame?  Your Major Spoilers review of Avengers #34 from Marvel Comics awaits! Previously in Avengers:  An empowered, godlike Moon Knight has just saved the world from fiery ruin.  Now an army of mummies and moon priests begins to reshape the world in the image of ancient Egypt.  But where does that leave the Avengers?  Broken, imprisoned, or on the run in the moonlit streets of New Thebes City.

“THE MOON KNIGHT IS HIS OWN MAN NOW!”

This issue opens with a flashback, taking us back several weeks earlier, to the moment where Moon Knight finally found the latest temple of Khonshu.  Fighting his way through the army of priests, Moon Knight expects a fight, but instead finds… a mad god, babbling in terror.  Cut to the present where (after defeating the Avengers last time out) enters the Hotel Inferno, the Las Vegas hotel that doubles as a prison for Mephisto.  His combined stolen powers (Iron Fist, Ghost Rider, Doctor Strange and Thor) allow him to free the Devil Incarnate from his incarceration, but Mephisto is surprised when Spector and Khonshu kill him and scatter his ashes to the four winds.  Khonshu then remakes the world in his own image, transforming Manhattan into New Thebes City, all the name of protecting humanity.  One power that got away from them, however, is the hereditary energies of The Black Panther, who is kept chained in the center of the city, tortured in the hopes that he will voluntarily give up his birthright.

Oh, and somewhere in the desert, Tony Stark and Carol Danvers desperately fight to protect the infant who now wields the power of the Starbrand.

THERE’S A NEW STARBRAND IN TOWN

This issue keeps up the momentum from last time, taking the mad energy of Moon Knight’s onslaught and carrying it into this issue’s story.  It’s a fast-paced issue from cover-to-cover, with the only real slowing down coming in the conversation between Moon Knight and T’Challa, and the brief interlude during which the lunar duo murders Mephisto.  Garrón’s art is up to the task of showing the wildest parts of this script, with special kudos due for the new look Manhattan, featuring pyramids, airships and a giant Khonshu in the middle of the island, but it’s all quite good.  The downside of any story that moves this fast, though, is that velocity can create a feeling that you missed something (like the fleeting mention of Captain America or the final dispensation of Mephisto) and this issue does have a little bit of that. The otherwise-amusing interactions between Iron Man and Captain Marvel also begs several questions, especially since it’s only been two weeks since reality was remade.

Even with those issues, Avengers #34 is a thrill ride that outpaces even last issue, raising more questions about Khonshu’s actions and motivations, adding complications to the story and giving Black Panther a good old-fashioned “Hell, YEAH!” moment, with strong art that puts together a better-than-average 3.5 out of 5 stars overall.  It reminds me of the wonderful X-Men Kulan Gath storyline from the early 80s, only on a larger scale, and even though I still have questions, the internal consistency of this story keeps me from focusing too hard on matters of how or why, instead just enjoying the wow factor.