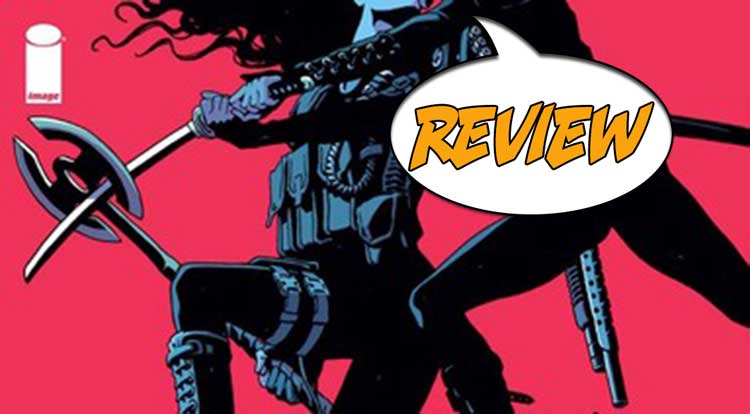 In THE OLD GUARD: FORCE MULTIPLIED #5, Andy escapes a watery grave by the skin of her teeth, Noriko attempts to subvert Nile and the boys make up and go free Booker.  But wait, there’s existential angst and all sorts of stuff you’ll have to read about in this Major Spoilers review!

Previously in THE OLD GUARD: FORCE MULTIPLIED:  Andromache is seven thousand years old, which means she has seen a lot, and even worse, done a lot.  Her friend Noriko spent centuries drowning over and over again before freeing herself, and as a result, has an iffy relationship with the rest of humanity.  Nile is a newbie immortal, the latest one to be uncovered.  Ex-CIA Copley discovered the secret of the Old Guard, and tried to use them but has since seen the error of his ways.  And now, the dramatic conclusion awaits!

IN THE DEPTHS OF THE OCEAN, NO ONE CAN HEAR YOU GLUG GLUG GLUG

Who’d be an immortal?  Sure, its great to live forever, assuming you can come to terms with watching your friends and family die over and over while you march forward, leaving them, and history, behind.  Yes, you see the best of humanity along the way, but boy, the arc of history does tend to bend towards darkness.  And if you did live forever, you couldn’t be good forever?  You know what I mean.  Would you be able to not give in to temptation, especially when your pursuers, your victims, the legal system, heck even the civilisation that underpins it all, will eventually fall into ruin?

So life isn’t all a bed of roses in THE OLD GUARD: FORCE MULTIPLIED #5.  We open with Andromache (Andy to her friends) who awakens in the trunk of a car at the bottom of the ocean.  Like Noriko before her, Andy can’t die – but she can sure drown over and over and over and over and over (you get my drift) again.  Which is one of the most appalling things to contemplate, when you think about it.  It sure sent a shiver down my spine.  It’s also a very compelling opening to a really great issue.

Greg Rucka has been around for a long time, writing tie in fiction as well as comics.  This experience shows in THE OLD GUARD: FORCE MULTIPLIED #5, which mixes high octane hand to hand combat with some very affecting emotional beats that ring true.  Andromache, as you would expect about a 7000 year old woman, is immensely complicated.  She has done some wonderful things, but as Nile uncovers, she has done some abominable things as well.  And being an immortal carries its own weight, for as the years march by with no hope of respite, what hope for a normal life, or even forgiveness for sins that weren’t even sins when they were committed.  In fact, that last point might (or might not) be a deliberate reference to a number of social justice issues percolating around the world at the moment.  Is it reasonable to condemn someone for actions they once did that at the time, were considered the norm.

Nile, from her vantage point as a young, black woman, convincingly argues that the particular sin Andy is guilty of was never right.  That scene, towards the end of THE OLD GUARD: FORCE MULTIPLIED #5, makes for gut-wrenching reading.  Indeed, it is Rucka’s deployment of those emotional issues that means that THE OLD GUARD: FORCE MULTIPLIED #5 rises up its genre roots, and actively tackles important social issues today.

Great storytelling married to great art makes for a fantastic issue.  Artist Leandro Fernandez and colorist Daniela Miwa combine to create some sublime art.  Fernandez generally doesn’t bother with backgrounds, which allows him to foreground his characters as they face off against each other.  This means that those character moments that THE OLD GUARD: FORCE MULTIPLIED #5 lives and dies on are central to the reading experience.  There’s a minimalism to his characters that is strangely appealing (in most panels, Noiko doesn’t appear to have a nose), and also a looseness to his inking that makes the images pop from the page.  Miwa has gone for a somber color palette, which really suits the story – there’s plenty of blood, particularly when Andy unleashes on some mercenaries, but given the tone of the story, the red is dull, which allows Fernandez’s depiction of Andy’s look of berserker rage to dominate the panel.  Really, everything in THE OLD GUARD: FORCE MULTIPLIED #5 comes together in startling ways.

BOTTOM LINE: BEFORE YOU SEE THE MOVIE, READ THIS

I’m beyond thrilled THE OLD GUARD: FORCE MULTIPLIED has made it to Netflix. But the source material is just as entertaining, a real thrill ride of action, suspense and an interesting cast of characters made stronger by the leading female triad.  Indeed, the male characters spend most of this issue in the background, as Andy, Norika and Nile act out their passion play.  It’s all gearing up for a splendid finish!

90%
90%
Great blend of action and character
Immortality is a curse, more than a blessing, in THE OLD GUARD: FORCE MULTIPLIED #5. The horrors witnessed, the bad deeds done, can never be unseen or undone. Andy, the oldest, the strongest, the most badass of the immortals, is really at the end of her tether, and it is the youngest immortal, Nile, who sees the potential for the Old Guard that Andy, with all her weight of sins, cannot. THE OLD GUARD: FORCE MULTIPLIED #5 is a great blend of action and character moments that will leave you thinking long after you turn the final page.
Alejandro Arbona Daniela Miwa Greg Rucka Image Comics Jodi Wynne Leandro Fernandez Review The Old Guard
Share. Facebook Twitter Pinterest LinkedIn Tumblr Email
Previous ArticleDark Nights: Death Metal #2 Review
Next Article Engineward #1 Review