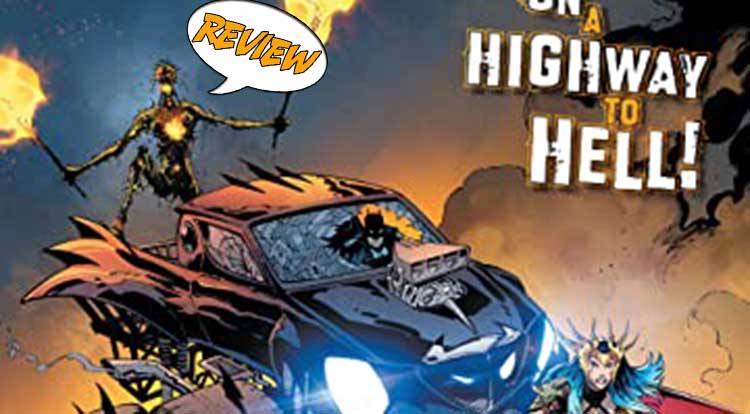 It’s time to take back the universe, one roadtrip across a wasteland while driving a sentient batmobile, at a time.  Your Major Spoilers review of Dark Nights: Death Metal #2 from DC Comics awaits!

Dark Nights: Death Metal #2 opens up with a grassy field.  The Batom (that’s not a typo), keeps an eye out for Wonder Woman and her team, but not close enough as he’s run over by a monster truck.  Diana, Swamp Thing, and Wally West arrive at Valhalla Cemetery, which they believe is the true Batman’s current base.  As they enter they discover it’s being guarded by the aged Justice Society.  Further inside they find Batman creating a roster of dead heroes to resurrect with his Black Lantern ring. Diana and Bruce then begin to argue about how to proceed.  Eventually he relents and follows Diana’s lead, that’s when Barry Allen arrives. Elsewhere the remaining henchmen of The Batman Who Laughs are shoving The Batman Who Laughs’ brain into Doctor Manhattan’s body which creates The Darkest Knight.  He wastes no time killing all his disciples except for one Robin who he calls The Robin King. Back with the heroes, they’re racing across the desert to find Batman’s secret bunker, where he keeps a way for them to reach where their friends are being held, Apokolips.

It’s really difficult to put a finger on exactly what Dark Nights: Death Metal #2 is trying to be.  On one hand it appears to be part of an earnest attempt to put a cap on everything that’s been going on in the DCU for a very long time.  On the other hand there’s a scene with Wonder Woman, using Swamp Thing as a shield, driving to where Batman is hiding a giant skyscraper sized mech that looks like Wonder Woman, Batman, and Superman smashed together.  Now, I can certainly appreciate a comic that’s trying to be wild and crazy and there’s plenty of that going on here.  I can also appreciate the attempt to redefine the DCU that’s happening. The problem is that the parts of this comic that are supposed to be one of those things, don’t mesh well with the parts that are trying to be the other.  This leaves this book feeling like a collection of interesting moments and fun scenes that feel like they’re from two different series that have been shoved together with Krazy Glue.

I just wanted to take a minute to spotlight the giant robot at the end of Dark Nights: Death Metal #2. The usage of the robot from Superman/Batman: Public Enemies, with lipstick and a tiara slapped on it, is both the strangest and most inspired thing I’ve seen in a comic in a long time.  This really is something to see.

The Bottom Line:  Maybe Wait For The Trade

One of the things that stuck out in this issue is how disjointed and incomplete things feel. Even with chapter breaks in the issue itself, this comic doesn’t feel like a complete chapter to the series as a whole. What’s happening is interesting, but it seems like the payoffs won’t come until later issues. Scott Snyder and Greg Capullo have proven to be competent storytellers with a firm grasp on the DCU history, but as of right now the individual pieces of this story aren’t standing on their own. 3 out of 5 stars

63%
63%
Hold Off A Bit
Dark Nights: Death Metal #2 has plenty of things going on that look interesting, but so much of it lacks context or doesn’t mesh well with each other. This feels like a book that will be better when read with more of the series.
Dark Nights: Death Metal dc comics FCO Plascencia Greg Capullo Jonathan Clapion Maria Javins Review scott snyder tom Napolitano
Share. Facebook Twitter Pinterest LinkedIn Tumblr Email
Previous ArticleJim Henson’s The Dark Crystal: Age of Resistance #9
Next Article The Old Guard: Force Multiplied #5 Review