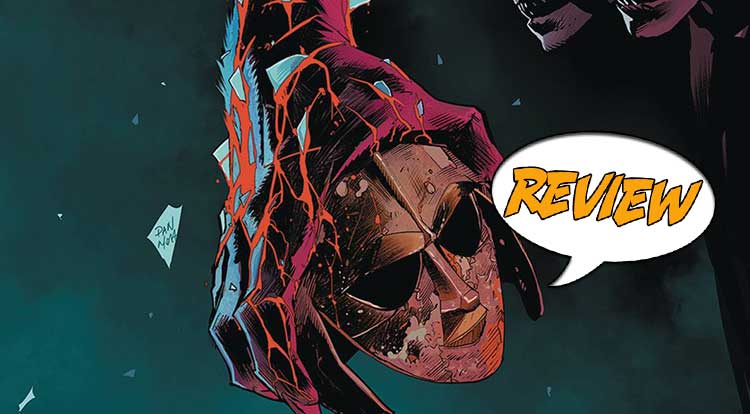 Once and Future #9 Review

Arthur still wants to retake England, but who has thrown Beowulf into the fray? And why does Merlin care? Find out in Once & Future #9 from BOOM! Studios.

Previously in Once & Future: Mythic storylines start to intertwine as Arthur continues with his plans to reclaim England and someone introduces a new player into the mix – Beowulf! Bridgette and Duncan come to an uneasy truce as they try to puzzle this out. In the Otherworld, Beowulf makes his way to Camelot and he and Arthur fight until a mysterious elderly man (Merlin, as it so happens) tells them to stop. Arthur doesn’t remember Merlin, but the old man introduces Beowulf to Galahad. What has brought Merlin here? Duncan and Bridgette head for home, and they’re hardly on their way before Rose warns them of something mystical headed their way!

Once & Future #9 opens with a bang, or at least a roar as Beowulf pulls the roof off Duncan’s car. To knock him off, Duncan rolls the SUV over. He and Bridgette are okay – his vehicle is done for. And Beowulf still lives. Bridgette orders Duncan to distract him while she comes up with something. Beowulf announces himself poetically, Bridgette is snarky, and Duncan is caught in the middle with a spear.

Duncan is outmatched by Beowulf, but Bridgette gets his attention by shooting him in the back, then Duncan leads him past a tripwire, which he notices. But Bridgette is cannier than that – he picks up a landmine loaded with mystical goodies that Duncan shoots to set off. Duncan and his grandmother may not be on the best of terms, but when it comes to supernatural threats, they are a formidable team.

While Duncan drops Bridgette off back at her residence, Elaine checks into an old pub in Bristol where she’s booked a room for an hour and insists on no disturbances. She talks, and it turns out that she can speak to Merlin. We learn that this is all part of his elaborate plan to get Arthur to trust him. Interestingly, when Elaine was working directly with Arthur, he did remember Merlin, which is curious. She also wonders about his plan – apparently getting Beowulf killed was part of it – and Merlin hints that there are other parts of the story. I think all my literature classes are paying off in reading this book!

There’s a very sweet scene at Bridgette’s home where the other residents immediately offer to change television channels – a callback to the first issue. But she’s tired and talks in veiled terms of her fallout with Duncan. And claims to have mellowed out, much to the surprise of her somewhat terrified housemates.

Rose does one last, late casting of pins and sees something else big brewing!

ENGLAND – NOT ALWAYS GREEN AND PLEASANT

There’s a lot of mystical action in Once & Future #9, so you know the color is going to pop. The opening sequence with Beowulf is action packed, and the use of wide panels emphasizes the cinematic feel. This may not be the Beowulf you remember from school, but he is tough, powerful character, larger than life and surrounded by magical energy. Strong as he may be, he is not invincible, and with him out of the picture this early, immediately I’m remembering what I can of the poem to try to anticipate where this might be headed.

I like the way the characters are drawn. Not only are they distinct, but they have a lot of personality. This is no simple monster slug-a-thon. The villains are not all on one cohesive team – they each have their own irons in the fire and while they share some information, they hide just as much. We can see it in Elaine’s face when it is revealed that she is now working with Merlin. Much of Merlin’s face is hidden behind a thick beard and under a hood. His eyes have an unearthly glow and in them you can feel the calculations that must be running inside his head.

Once & Future #9 is a terrific balance between literature and horror, and as someone with a fondness for literature, this is a lot of fun. I like the idea of stories that live on their own, but which can still be affected by people who know enough to derail them. Top it off with breathtaking art and this is a solid issue.