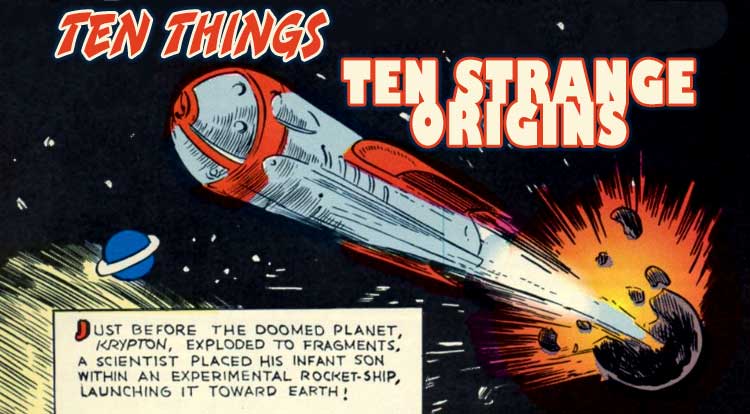 Not everyone can be rocketed from a dead planet or bitten by a radioactive wombat… Welcome to Ten Things: Ten Strange Origins!

Whooshman-Bicarbonate Films, in conjunction with An Amateur Comics Historian and being rocketed from a dead planet or something, Presents: Planetary tour guide and astronaut Captain Ace Arn was marooned on a strange asteroid where he was targeted by a crime syndicate that dominated the entire planetary system, home to multiple alien races. When they tracked him down, four criminals from four different worlds shot him all at once with a special ray that would turn the target into a perfect duplicate of them, under their mental control. Ace became a strange hybrid-creature, with each segment granted the strange super-powers of an alien (flight, electrokinesis, magnetic control and super-strength), naming himself after the four worlds: Ulla, Laroo, Trago and Raagan, with his own name Ace rounding out his nom de guerre.

If you’re wondering why anyone would have a gun that turns the target into you? You’re not alone. Hailing from a pocket dimension known as Mojoworld, named for its despotic ruler, Longshot was extensively experimented on, giving him enhanced physical and luck-manipulation powers. Forced to be a stuntman in Mojo’s entertainment/murder enterprises, he escaped to Earth, where his adventures brought him to The X-Men. There, he fell in love with Dazzler and they had a son. Through not-fully-revealed means, that child was also raised in Mojo’s shows, growing up to be the hero called Shatterstar, who was then sent back through a temporal loop to Mojoworld’s past, where his DNA was analyzed and used to create… Longshot.

This canonically makes him his own Grandpa. For centuries, stories flew about the origins of the renegade Time Lord calling herself The Doctor: Was she grown in the genetic looms of House Lungbarrow? Was she somehow a space-time echo of a legendary figure called The Other? Was she half-human? Was she Merlin himself? All the speculation apparently hid an even stranger truth, that The Doctor wasn’t a Time Lord at all, but an unknown alien called The Timeless Child, whose strange physiognomy actually gave the Gallifreyans the ability to regenerate in the first place.

Then again, since her old frenemy The Master, a galactic-class liar and manipulator is involved, perhaps it’s all another lie. Ace pilot Jerry Steele was transporting a spy behind enemy lines in WWII when he was shot down. Ending up in a detention camp, Jerry was tortured to death and dumped in a field, where he was revived by a passing farmer with a mysterious, possibly magical potion. Turns out that the “farmer” was actually the leader of the V-Group, an underground group of freedom fighters, who then subjects Jerry to a series of injections to give him super-powers, then was gifted with a magical costume to give him even MORE magical powers and tasked with recruiting a group of American kids to serve as his V-Boy Defense Corps, whom he contacted with a tiny radio in his ring.

If you’ve ever wondered what I mean when I say “a hat on a hat”, this is it. When first encountered by Superman, Brainiac was just a little green man with a monkey on his back and a penchant for shrinking cities, including the Kryptonian city of Kandor. Over the years though, things got complicated, leading to a series of revelations: On the distant planet Colu (or Yod, depending on the telling), the Computer Tyrants built a super-computer in Coluan form to scout the universe for knowledge and gather everything he could. This, of course, came AFTER the revelation that Brainiac had descendants (hastily reconceptualized as the descendants of his adoptive Coluan son) and none of the stories explained why his costume was generally a hot pink tennis outfit. As he upgraded, Brainiac became less and less human-looking, and his origin more complicated, which made his first appearance even more hard to reconcile. As a child, Jack Hawksmoor was repeatedly abducted, seemingly by aliens. During those visits, he was subject to painful surgical procedures that replaced his human organs, optimizing him to live in cities. When a sentient Kansas City from the future attacked, it became clear that he was not captured by spacemen, but by future scientists. As ‘The King of Cities’, Jack can communicate with and even travel between cities, but grows ill if he is out of a metropolitan area for too long. Originally a part of the Wildstorm Universe at Image, Jack and The Authority were last seen as part of the DC Universe, with his origins seemingly unchanged. As a child, Bob Frank was bitten by a cobra, but saved from certain death by a mongoose, who died in his stead. Bob’s father, apparently a fan of Kipling’s work, took a sample of the mongoose’s blood and injected it into young Bob, giving him superhuman speed. Later stories retconned this to be due to his mutant physiology, but back in ’41, it was mongoose blood. Not magical mongoose blood, not radioactive mongoose blood, just the fluids of a dead animal they had hangin’ around.

The Golden Age was hardcore. Initially appearing as a mysterious member of Professor Power’s Secret Empire, the girl known only as Cloud fell in with The New Defenders team. Later, she began transforming into a male body, which caused some friction in a burgeoning romance, before the truth was revealed: She wasn’t a woman who turned into a cloud, nor a cloud who turned into a man. Cloud was, in fact, a sentient nebula who encountered the alien Shaper of Worlds and sent her to Earth to experience the human condition, only to have her accidentally kill two teenagers in a car wreck and absorb their forms and bits of their memories.

So this all means that, one time, Iceman made out with a gender-shifting cosmic dust cloud. A N*zi scientist studying killer bees, Fritz von Meyer discovered a hive with unusually intelligent bees, which he proceeded to bombard with hard radiation in the hopes of creating aggressive, yet controllable insect minions. Instead, he was attacked and overwhelmed, his body torn to shreds, but his mind somehow dissipated into the bees of the swarm. Commanding the bees to surround his now-stripped skeleton, he became Swarm, the terror of melissophobes everywhere. After being taken on an expedition to Mongolia by his parents, Richard Grey was left orphaned and raised by giant condors as one of their own. He was taught to fly (!!) by his adoptive bird parents, eventually falling in with a sect of monks whose clothing he emulated. Once he had grown to adulthood, Richard returned to the United States where he coincidentally found a dying senator who was his EXACT physical double.

And that’s how, on Earth-X, a boy without pants, raised by birds that had no business being in Asia somehow became a member of the 77th Congress.

Thanks to Faithful Spoilerite Jarmo Seppänen (@Malone_Hasco) for this week’s topic, Ten Strange Origins! Feel free to follow along @MightyKingCobra for more Ten Things madness on Twitter or check out the full Twitter archive here! As with any set of like items, these aren’t meant to be hard and fast or absolutely complete, if only because there’s only so many times a writer can type “nanites” before they start getting wiggy. Either way, the comments section is Below for just such an emergency, but, as always: Please, no wagering!