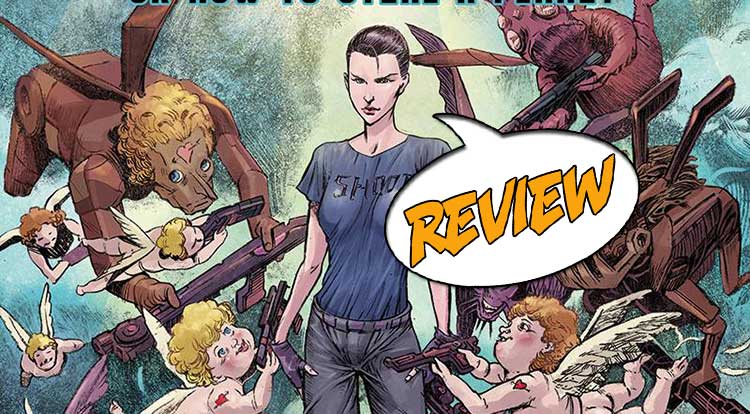 Heist, or How to Steal a Planet #6 Review

Who has the MacGuffin now? Eddy Lets has joined Samuel Reven and is now working against Glane Breld, who is not thrown off stride…or is he? Find out in Heist, or How to Steal a Planet #6 from Vault Comics! HEIST, OR HOW TO STEAL A PLANET #6

Previously in Heist, or How to Steal a Planet: The plot continues to build. Glane Breld devises an elaborate plan to get a judge in their pocket by playing into her vices and making a deal. Samuel Reven is looking for Eddy Lets’ long-lost sister, Kenni, who went into foster care and was sold to the Thieves’ Guild. She did so well as an accountant for them that she has since retired and vanished. Breld takes Brady deep into Conqueror Crow territory, taking out Crows with sleeping darts until he gets to their leader, Dudge – and apologizes for stealing a car from him and gives him the keys. It’s all part of the master plan!

AND THEN THERE WERE THREE…AND A HALF

Heist, or How to Steal a Planet #6 opens in the middle of action, with Glane Breld admiring Gaville. And I don’t blame him – I love her! She is smart, savvy, and ruthless with a little sense of humor. They’re trying to evade sniper fire – and the sniper is none other than Eddy Lets. Samuel Reven found his sister, and that was enough to make him switch sides in this little fight. Eddy lets rip with a couple smart bullets – bullets tuned to home in on their particular brainwaves. (Don’t think too hard about it, but it is a kind of cool idea.) Breld has a fancy brain splint that should mask his presence. He’s worried about Gaville. But no, this is why she’s fun. She’s designed her own splint, and she goes one better with a pair of fake brain signature emitters, so Eddy’s fancy bullets take out two of his own hit squad.

Samuel Reven is not pleased, but Eddy tries to persuade him that he’s more useful than just being another assassin. He told Reven about the plot with the judge, and Reven hustled her off planet. Ooh, now there’s a new complication!

But Blane is quickly off to his next plan, this time with Celene in tow. Heist has a population of nine billion, and he wants to get as many of them as possible on their side. He has an idea that involves hacking into the neural splint network and takes Celene down to the sub-levels. With another disguise and some clever drone special effects they clear the headquarters…and upload a cat video that subliminally gets people to think that Reven is a crook.

Glane meets Eddy for a parley. Well, a stare-off. It doesn’t seem to get anywhere, but Glane says it’s all part of his plan. Another plan, eh?

Too bad about Eddy switching sides. Breld’s first plan involved having him inherit Heist. Now that has changed to the majority owners of the club, The Bold Door, which was founded by Eddy’s mother. He goes there with Celene, but on the way they are accosted by a hologram of Samuel Reven. He’s seen the cat video. And he’s gone one better.

One of the things that brings Heist, or How to Steal a Planet #6 to life is all the little details in the art. Small things that were set up issues ago that looked like touches of flavor come back around as perfectly normal elements of this crazy world. Heist, as a city, is like a debauched dystopian future New York on steroids. From the billie birds to the omnipresent holograms it is sleazy and lively and weird.

I love the sequence where Breld and Celene drop in – literally – to the undercity. To get there, they take a series of chutes that unceremoniously route them around and down. They get to the right spot because Breld knows the code. In the angular panels that track their trip, we see the consequences of those who didn’t get the code right. It’s crazy, it’s dangerous, and it is so full of eccentric atmosphere.

BOTTOM LINE: WHO IS A STEP AHEAD OF WHOM?

Heist, or How to Steal a Planet #6 is high stakes drama. I love that everyone in it is smart. Reven is rich and powerful, but he knows that that alone isn’t enough to take Breld down. For his part, Breld is madly setting up things he may need in the future. And we readers fly along, enjoying the ride as each subsequent twist is revealed to us.

Heist, or How to Steal a Planet #6

Eddy has switched sides – and Glane Breld must adjust his plans on the fly.