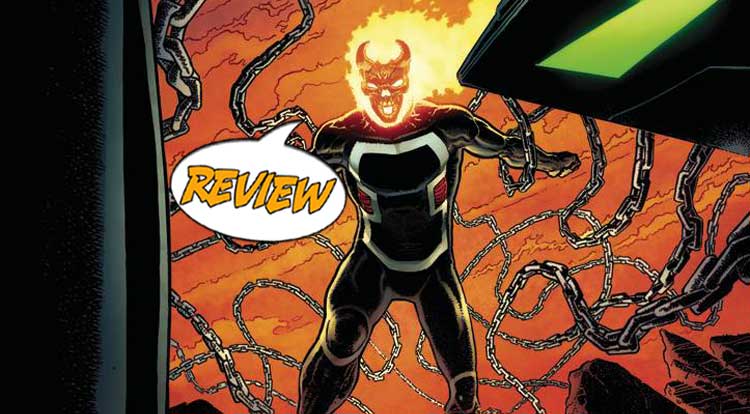 The King of Hell versus the Sorcerer Supreme… Place your bets!  Your Major Spoilers review of Ghost Rider #7 from Marvel Comics awaits! Previously in Ghost Rider:  Johnny Blaze and Danny Ketch already went to war against each other as Spirits of Vengeance, but now that Danny is possessed by the Spirit of Corruption, the real fireworks are ready to begin!

THE DAWN OF A NEW HELL

Finally overwhelmed by the evil he has been absorbing, Johnny Blaze has come to Manhattan to face off with Dr. Strange, whom he blames for his role as the new honcho in hell.  He’s also filled the streets with his demons, leaving Wolverine and The Punisher to handle the army of evil while Johnny goes toe-to-toe with the Sorcerer Supreme… and his brother Danny Ketch!  Now possessed by a Spirit of Corruption, Danny faces down his his fellow Rider, fighting with all his might, while the other heroes are forced to protect Mephisto, upon whose head Lilith has placed a bounty.  Danny uses his power to kill the demons within Ghost Rider, only to have Dr. Strange cleanse him of his own spirit, leaving Johnny once again in his right mind.  Thanking Danny for his help, Johnny races off with the Lord of Lies, warning Ketch that he’ll be back for him, and then they get to fight the other half of hell together.

“WE HAVE TO PROTECT MEPHISTO…”

There’s a lot of 90s in this issue’s DNA, from the reuniting of most of the New Fantastic Four to Danny ketch’s role in the plot to the machinations of LIlith, the villain who triggered the Midnight Sons crossover back in ’93 or so, and that’s not a bad thing.  It just doesn’t really appeal to me, and the sheer number of pages where characters are just standing and watching an attack as they comment reminds me of how difficult some of those stories were to witness.  The art is likewise just fine, with some special attention to the flame effects, but it never quite imbues the full-on demonic invasion of Manhattan with a sense of urgency or menace.  It doesn’t even get to the level of destruction porn that we saw in the Avengers movie, which is a bit disappointing, but there are some truly excellent facial expressions (especially post-possession Johnny Blaze and the various faces of Mephisto throughout the issue) that keep it from being a disappointment.

I feel like Ghost Rider #7 really wanted to be an epic, explosive showdown of destiny, but instead it will have to settle for just being a pretty good comic full of exposition and fights, with better-than-average art and nothing glaringly out of place, earning 3 out of 5 stars overall.  The beginning of a new arc (including the appearance of another classic 90s Ghost Rider enemy) has potential and the closure of this is done well, even if it doesn’t seem to be the blockbuster that it wanted to be.

It feels like it wants to be much more epic than it ends up being, but it's not a bad issue, and leaves Johnny himself at the end... I wonder if next issue is the last?
Aaron Kuder Chris Robinson ed brisson Ghost Rider Jason Keith Joe Caramagna marvel comics Review
Share. Twitter Facebook Google+ Pinterest LinkedIn Tumblr Email
Previous Article[Preview] 2020 iWolverine #1
Next Article [Preview] Strikeforce #8