A new Mighty Morphin team has assembled to take on the deadliest threats to Earth – but who is the All New Green Ranger by their side? 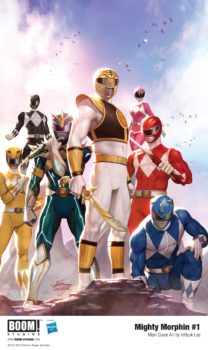 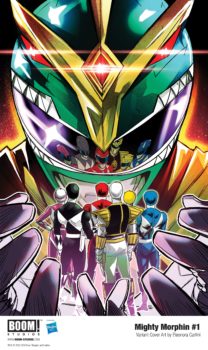 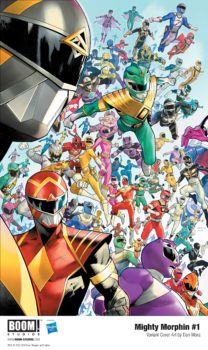 The new Mighty Morphin team is on a collision course with an even deadlier Lord Zedd, who has a new mission and a new motivation – one that will change everything you thought you knew about our heroes! But even if the Mighty Morphin team can find a way to survive Zedd and their mysterious new enemies, they may discover the greatest threat to their future is the shocking secret of Zordon’s past! A new Mighty Morphin epic begins here, perfect for longtime fans and new readers alike.

New York Times bestselling author Ryan Parrott is a comic book and screenwriter based out of Los Angeles. A graduate of Chapman University, Parrott has written for television series NBC’s Revolution and Hulu’s Chance. Parrott is also known for his work on DC Comics’ Batman: Gates of Gotham, IDW’s Star Trek comic book series, including Starfleet Academy, Boldly Go, and Manifest Destiny, Dynamite’s Death to the Army of Darkness, and his creator-owned projects Volition, Oberon, and Dead Day with Aftershock Comics. He is currently the writer for Mighty Morphin Power Rangers and Mighty Morphin Power Rangers/Teenage Mutant Ninja Turtles with BOOM! Studios.

“This is a brand new beginning for an all-new Mighty Morphin team featuring characters you know – and an all new Green Ranger. This book is a chance to explore the past, present and future of the team in ways you’ve never seen before,” said Parrott. “Coming out of Necessary Evil, there seemed like an opportunity to not only start fresh but focus the story in on our new MIGHTY MORPHIN team like we haven’t before.”

Marco Renna is a comic artist from Italy who made his debut with Action Lab Comics. After winning the Top Cow Talent Hunt 2016, Renna became the  main artist of Fathom Vol.6 and other Aspen Comics series. He has also worked on some short stories such as Sandokan for Star Comics and Muhammed Ali for Petit à Petit. He also collaborated with Dynamite Entertainment on James Bond.

“I’m really happy to have the opportunity to work on Power Rangers. I used to watch the TV show every day and being able to draw these characters is a dream come true,” said Renna. “I feel honored to be part of this fantastic team and I am excited to go into this new adventure. I really hope you enjoy my art.”

Currently, Power Rangers is celebrating 27 continuous years on the air, making it one of the longest running kids’ live-action series in television history with nearly 900 episodes aired to date. Created by Haim Saban and launched in 1993 with Mighty Morphin Power Rangers, the franchise celebrates its 27th season, “Power Rangers Beast Morphers” currently airing on Saturdays at 8 a.m. (ET/PT) on Nickelodeon in the U.S.

“The UNLIMITED POWER era is all about new beginnings for two new teams of Power Rangers as they meet new allies, new enemies, new secrets and an all new Green Ranger,” said Matthew Levine, Editor, BOOM! Studios. “Both of these new series will be critical for long time fans and present an exciting jumping on point for new readers who will learn that the true history of the Power Rangers isn’t what they expected.”

Fans who attend the BOOM! Studios Mighty Morphin Power Rangers: The Future is Now Panel on July 25, 2020 at 1:00 pm PT on the Comic-Con@Home website will get a very special preview of never-before-seen art as well as behind-the-scenes information about the series and what’s in store for readers! More details at www.comic-con.org/.

Print copies of MIGHTY MORPHIN #1 are scheduled to be available in November 2020 at local comic book shops (use comicshoplocator.com to find the one nearest you), or at the BOOM! Studios webstore. Digital copies can be purchased from content providers like comiXology, iBooks, Google Play, and Madefire.

For continuing news on MIGHTY MORPHIN and more from BOOM! Studios, stay tuned to www.boom-studios.com and follow @boomstudios on Twitter.