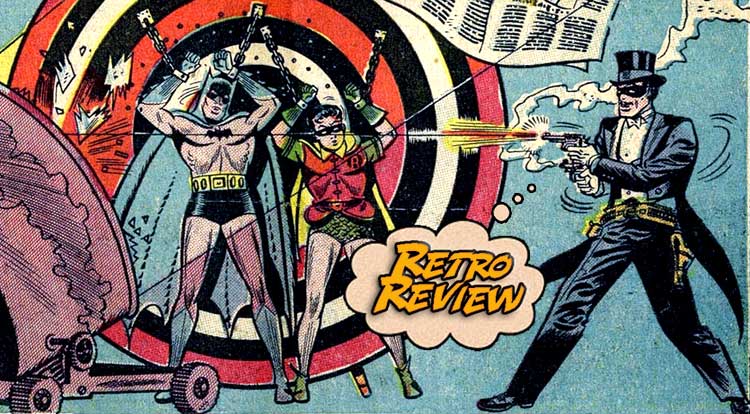 Everybody loves the Suicide Squad’s silver-masked mercenary, Deadshot…  but did you know about his tuxedo?  Your Major Spoilers (Retro) Review of Batman #59 awaits! Previously in Batman:  So, anyway, Bruce Wayne yadda yadda avenge his parents blah blah training for years yackety schmackety protector of Gotham City.  By 1950, Batman and Robin were well-established and even deputized by the official law enforcement agencies of Gotham City and the United States, respected and revered by the people he protects.  But one night, it becomes clear that he’s got some competition for the role of protector. After bringing down a crew of fleeing burglars, Deadshot gains an audience with Commissioner Gordon, arguing that two vigilantes are better than one.  His guns are officially licensed, and he NEVER shoots to kill, only to disarm and detain, leading Gordon to ask why he doesn’t just join the force as an official officer of the GCPD. It’s rather sad that few people know the name of Lew Sayre Schwartz, as the art in Batman #59 is top-notch stuff, from the  details in Deadshot’s evening dress to the excellent vehicles to the details backgrounds.  (Though credited with the art, Bob Kane only pencilled the figures of the Dynamic Duo, reminding us once again that Kane got credit for a LOT of things that he didn’t actually create.)  The appearance of the Bullseye symbol in the night sky is disconcerting for Batman, and he finds the new vigilante a little bit fishy.  When Deadshot’s claims of a steel plate in his leg are proven false, Batman brings his worries to Commissioner Gordon.

Gordon (seen here in his portly Golden Age incarnation) chalks it up to jealousy, continuing to work with both masked men, but Batman continues to quietly investigate his rival, even using a piece of Deadshot’s costume to try and find out who he is.  The clues lead to Floyd  Lawton, the new rich guy in town, and when Batman snoops around his country home, he finds that Lawton is actually planning to become the newest crime lord of Gotham.  When confronted with the truth, Deadshot laughs it off, even threatening to KILL Batsy in cold blood, all the while playing the hero and gaining the trust of Gordon. Deadshot’s plan turns out to be the old Kansas City shuffle, a ruse to make Batman look bad, while Lawton actually brings in the criminal he pretended to be in league with, leaving Batman on the wrong side of the Commissioner once more and in the fatal crosshairs of Deadshot! Deadshot falls apart after failing to hit his target, ending up in jail (where he’d stay for more than twenty years, our time) and leaving the Commissioner and Robin to wonder how he did it.  Turns out, he cheated, breaking into Lawton’s home and altering the sights on his weapons, then calling in a false crime to draw him out.  It’s kind of clever, but also… kind of mean?  The rest of the issue features a weird, almost horror-tinged murder story, a Captain Tootsie ad and a future adventure thanks to Dr. Nichols hypnotic time machine, leaving Batman #59 with a well-deserved 4 out of 5 stars overall.  It’s pretty retro for the time-period, but it’s a fun issue that sets up a Bat-villain who has become important in the last few years.

It's an inventive and entertaining issue filled with fun Golden Age style stories, reminding readers why Batman was one of the only features to make it through the dark times uncancelled.