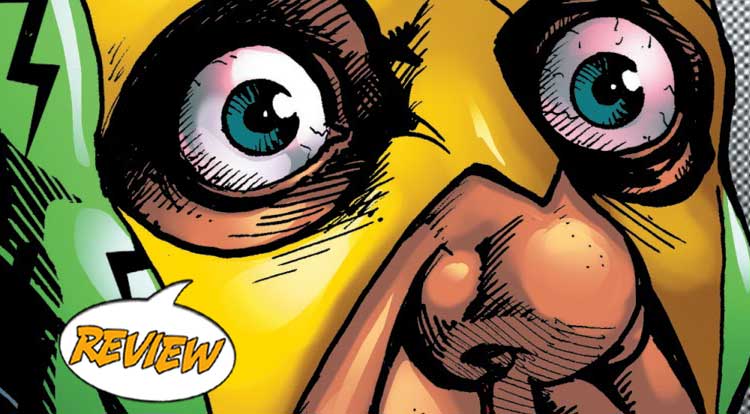 What’s past is prologue, even long after people are gone…  Your Major Spoilers review of The Boys: Dear Becky #2 from Dynamite Entertainment awaits! Previously in The Boys: Dear Becky:  As Hughie’s discoveries take him down a highly dangerous rabbit hole, what he learns about the good old days reveals a strangely conflicted Butcher… at the worst possible time, as the Boys investigate a particularly insidious supe threat.

As this issue opens, Wee Hughie is visiting his parents (sadly, in the cemetery), sharing the details of his week, the weather and how he intends to take out the boat to enjoy the “braw day”.  Then, it gets heartbreaking, as he apologizes for always making them listen to his problems, followed up by talking about his problems.  It’s a really sweet, human moment, broken by the arrival of the vicar, who talks like Stan Lee for some reason, even directly speaking to the “readers” about religion and how Hughie needs to get to church more often.  It’s a jarring moment, followed up by an overtly offensive one, as the next chapter of Butcher’s diary tells us of a new team of supes (The Skorchers, whose members are all just reprehensible stereotypes that seem to come from the year 2020 rather than the 1998 time-frame they purportedly exist in) and Mallory’s attempts to unravel them.  To get some intel, Butcher attends the funeral of a recently dead supe and finds her husband sexing up a groupie in the back of the mortuary.  (Ugh.)  He pumps the Thor-analogue for information, then just to prove he can, sticks his face *IN THE CREAMATORIUM* and turns it on…

I REALLY HATE THAT COVER

I have to say, that moment (including Butcher’s gleeful shouts that the supe is breathing in his dead spouse’s ashes) was utterly skin-crawling, even for a book that joyfully crosses the line the way this one does.  It makes Butcher seem like a petty bully and even if that’s intentional, it’s truly unpleasant to read about.  As for the Skorchers, a couple of their members are just this side of a hate crime, and I don’t have any interest in seeing them get brutally murdered, even in the interests of broad political satire.  The two parts of this issue just don’t gel for me, leaving me wishing there was more of modern Hughie and less brutality.  Of course, the framing sequence isn’t perfect either, as Annie “Starlight” January, who is supposedly the person Hughie cares the most about, doesn’t even show up in the issue, instead serving as an unseen voice from the other side of a door.  The art is perfectly serviceable, but it reminds me that Darick Robertson’s work was a large part of the book’s initial appeal.  John McCrea’s art took a lot of the heart out of the characters (especially The Supes) and Russ Braun seems to be just doing a cover band tribute of McCrea, muting the emotional beats of the story even more.

Sadly, this is likely my last issue of this book, as The Boys: Dear Becky #2 doesn’t quite stick the landing, emphasizing the worst parts of the original series and down-playing the best parts of this one, dialing up the violence and offensive humor without enough connective tissue to hold it all together, earning a disappointed 2 out of 5 stars overall.  On the plus side, it’s good to see Hughie again, I just wish it were under better circumstances.