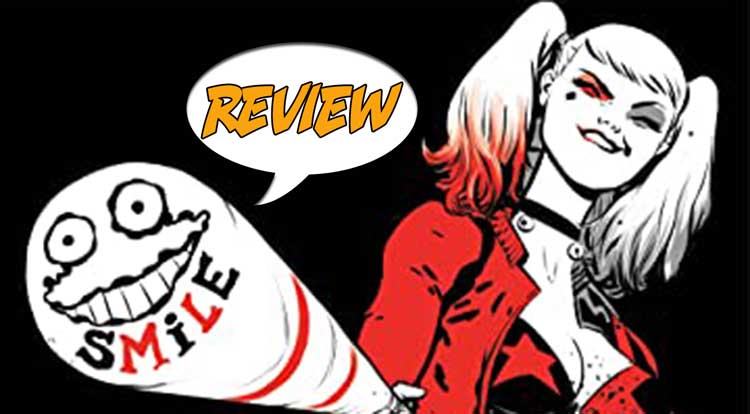 Hot off of robbing one Ms. Harley Quinn, a trio of thugs recall the tale.  But which one of them is telling the right version? Your Major Spoilers review of Harley Quinn: Black + White + Red from DC Comics awaits! Previously in Harley Quinn: Black + White + Red: Three crooks just managed to do the unthinkable: they stole something invaluable from Harley Quinn herself! But as they compare notes on how the job went down, they start to notice some discrepancies in what they saw.

Harley Quinn: Black + White + Red #3 starts off with three criminals sitting in a bar, around their latest score, a red, sealed vase.  The three then take turns explaining how they managed to get the goods.  All the stories play out roughly the same: The criminals enter Harley’s place, they’re then jumped by the anti-hero, they fight, one of them gets the upper hand on her and they all make their escape with the goods. What does change though are some of the details.  For instance, the first crook describes Harley as being in her original jester outfit and her house being a funhouse.  The second seems to remember a Harley that’s closer to the Suicide Squad movie version of her. While the third crook remembers the scenario as an abstract, Alice In Wonderland type story with a Harley that’s similar to her more recent comic runs. Eventually though it’s revealed that the real Harley has tracked the thieves down and proceeds to reclaim her property, forcibly.

You Get What You Pay For

The trope of having a group of unreliable narrators describing the same character or event doesn’t always work for every character.  Surprisingly though, Harley is one that it actually works fairly well.  Considering the many changes Harley has had over the years both visually and personality wise, there’s a lot of room to tell this kind of story and I think the creators used that space well.  Unfortunately, it’s what’s happening around this structure that doesn’t hold up well.  There’s never a real good reason given why the criminals have different recollections of the events, there’s a pretty quick and uninteresting ending,  and the criminals themselves are flat and unremarkable.  This issue deserves some benefit of the doubt as it’s part of DC’s digital first lineup, so not only does it have a low price point it also follows the lead of some of the other digital first books by being a quick and easily digestible comic.

The Bottom Line:  Decent Core, A Bit Shaky Around The Edges

Harley Quinn: Black + White + Red #3 is a barebones comic that has a fun premise and does some fun things with the history of Harley’s redesigns, but there isn’t much else here to make this a memorable comic.  3 out of 5 stars