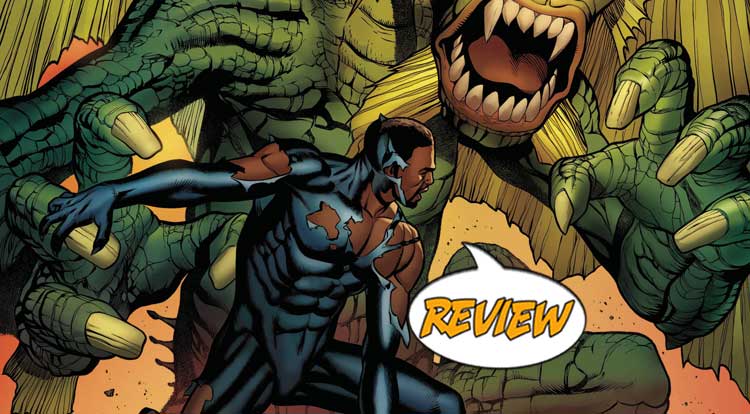 Black Panther and the Agents of Wakanda #8 Review

He brought the fin and the fangs, now we all just wait for the FOOM!  Your Major Spoilers review of Black Panther and the Agents of Wakanda #8 from Marvel Comics awaits! Previously in Black Panther and the Agents of Wakanda:  Fin Fang Foom is one of the mightiest creatures in the Marvel Universe and now he’s no longer alone!  Can Broo and the other Agents of Wakanda unravel the mystery of this bizarre new “Legion of Foom” before their rampage destroys Avengers Mountain?

THE TAO OF FOOM

With the destruction of their headquarters by the Space Dragons, the Agents of Wakanda are on the defensive, with American Eagle and Mockingbird providing aerial support and Fat Cobra taking the fight directly to the dragons.  Granted, it gets him flattened but it provides cover for Broo to make his way to Fin Fang Foom, where he discovers… a teeny, tiny little dragon?  Worse still, the others aren’t Foom’s kinsmen, but somehow his own worst instincts to kill, smash and destroy given terrible flesh.  Broo convinces the dragon to help him, and they take to the air to turn the tide, leading to an exciting battle and Foom reconstituting into his old, terrible self again…  But he’s back to his old raging, sun-scraping, world-destroying ways.  The arrival of the Warriors Three heralds a big battle, but Foom chooses instead to postpone, declaring a truce and flying away to leave the team to deal with the impending terror of ‘Empyre’…

FAT COBRA IS ALWAYS WORTH THE WAIT

…or not.  Apparently, this is not only the last issue of this book, according to writer Jim Zub, the Empyre crossover tie-in is one of several books that just isn’t going to happen in the new comic book reality.  It’s a bummer too, as this issue is the closest we’ve come to seeing all the Agents in play at the same time, and getting to see Mockinbird, American Eagle and Fat Cobra working together is fun both visually and in terms of dialogue.  The art in this issue is very well-done, especially the Legion of Foom, but making a gorilla and a strange bug-alien like Broo have features as expressive as the humans is an impressive feat.  It’s a shame that this book ends on such a weird note, but at least it never fell to pieces or had to deal with a new writer who doesn’t get the team dynamic just right.

I’m sad that Black Panther and the Agents of Wakanda #8 is the end of the road for this team, but at least it goes out on a strong note and reminds me that if I love a book, it’s probably doomed, with strong art and engaging writing earning 3.5 out of 5 stars overall.  Even if we don’t get more of this book (or, indeed, the ‘Invasion of Wakanda’ tie-in miniseries promised in these pages), we can move on to Empyre and remember what once was.