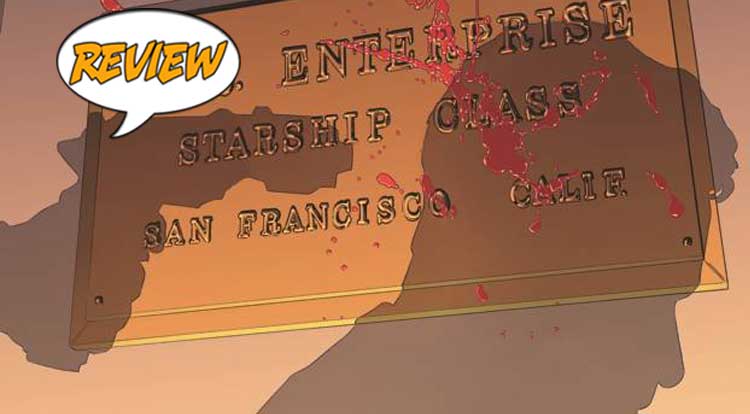 Previously in Star Trek: Year Five:  With a villain revealed, a stranded crew, and a ship on a collision course with total destruction, Captain James T. Kirk will have to face the biggest challenge of his life on his own!

“YOU THINK I STILL FEEL PAIN?”

With the 400-plus crewmen marooned on an uninhabited planet, Gary Seven is ready to complete his mission: To remove the Enterprise from the time line by any means necessary.  The only thing standing in his way is Captain Kirk, who gives him a run for his money in hand-to-hand combat, but Seven gets the upper hand.  As he’s being strangled to death Kirk desperately grabs a tool and rams it into his opponents eye, only to have Seven shrug off the grievous injury and regain his gun.  He orders Kirk to fly the Enterprise into the atmosphere, where it will either burn up or explode on impact.   Down on the surface, the crew rallies to convince Spock of the logic of helping to save their captain, only to have McCoy get the last word when he points out the ship is about to crash into them.  McCoy, Spock and Bright Eyes (a young  Tholian crew member) manage to jury rig a transporter from the damaged shuttlecraft, allowing Spock to turn the tide against Seven with a phaser and a remarkable bit of knee-to-face combat.  The commanding duo barely manages to save their ship, and Kirk orders Sulu to set a course… for Earth.

This issue feels like a really impressive final act of a lost TOS episode to me, with a few liberties taken here and there.  The use of crew members from ‘The Animated Series’ makes it seem that those stories, now finally canon again, were the fourth year of the series, but you don’t need to know all those stories or characters to enjoy what we get in these pages.  Best of all, since we don’t have to work under NBC’s 1968 budget, moments like Isis shapeshifting into a giant spider-creature or Seven’s injuries at the hands of Kirk and Spock are fully rendered (and probably a bit more gruesome than network standards would have allowed.)  Lanzig and Kelly’s art strikes a good balance between character likeness and dynamism, with Gary Seven in particular looking incredibly cool, evil and always identifiable like Robert Lansing.  The sequence of The Enterprise barely managing to pull off the last minute escape is beautiful as well, showcasing their skillful depictions of technology.

In short, Star Trek: Year Five #12 looks great, keeps up the tension, and makes for a clearly-plotted and exciting issue, earning 4.5 out of 5 stars overall.  I’m not sure if this is the final issue of this series (IDW’s solicitations aren’t clear on the matter, and twelve issues does seem like a natural number for a miniseries), but if it is, Year Five is going out on a really high note.  I just hope that it’s not the end, because this book is really well-done.