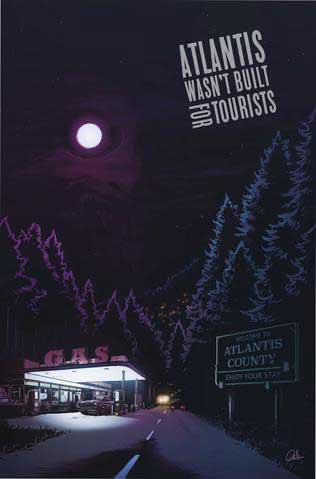 ATLANTIS WASN’T BUILT FOR TOURISTS
Writer/Creator: Eric Palicki – No Angel (Black Mask Studios), Fake Empire (Darby Pop Publishing), All We Ever Wanted (A Wave Blue World)
Artist: Wendell Cavalcanti – BlackAcre (Image Comics)
Colorist: Mark Dale – Gwar: Orgasmageddon (Dynamite)
Letterer: Shawn Lee – GI Joe, The Crow (IDW)
Cover Artist: Caspar Wijngaard – Angelic (Image), Peter Cannon: Thunderbolt (Dynamite)
Drifter Lucas Lewis arrives in Atlantis County, Oregon expecting little more than a hot meal and a soft bed for the night. Instead, he finds a town in thrall to a corrupt sheriff who’s used the very real threat of vampires lurking in the nearby wilderness to consolidate his power and control the population. Determined to rid Atlantis of both its power-mad sheriff and the monsters in the forest, but nothing is ever at it seems and neither is Lucas. Join Lucas in his quest to return law and order and return Atlantis to the hands of its townsfolk.

In a press release from Scout Comics, Palicki said, “In bringing Atlantis Wasn’t Built for Tourists to Scout Comics, I feel as if I’m joining a family of creators making some of the most exciting, enthralling, and status quo-challenging books on the shelves today.”