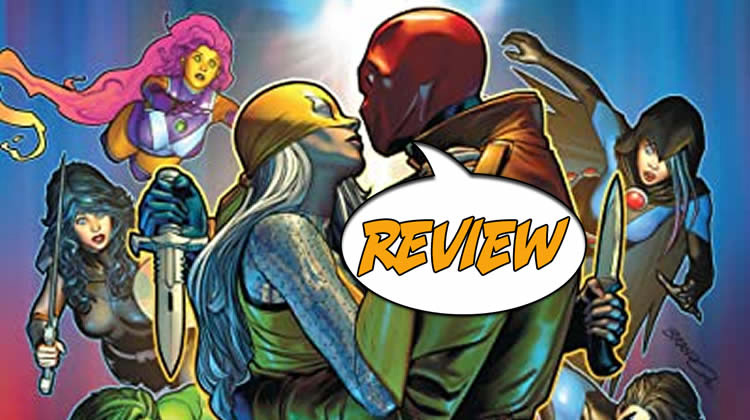 The great thing about DC’s Digital First line is that, even during a week when there is no new content from the company in local shops, there’s still good reading online! That’s the case with Titans: Titans Together #2, titled, “Bride of Blood.” SOLICITATION: Master Mercenary Deathstroke needs the Titans’ help. His daughter, Ravager, was infiltrating the demonic Church of Blood when she succumbed to the hypnotic power of its leader, Brother Blood. Red Hood believes that the plea is real… but is Deathstroke telling them the whole story?

RED HOOD IS A TITAN?

Even though he’s kind of a part of the Batman family, Red Hood, at least in this series, is a part of the Titans. He seems to have just stepped in unannounced last week, anyway. Oh, well…

I always worry that Deathstroke is like Star Trek: The Next Generation’s The Borg. When he first appeared many years ago in Teen Titans, he was unstoppable. The team largely had to sidestep or avoid him, or else they’d likely end up dead! Now, not so much. He even had his own title for a while, but that’s gone the way of the world. So, they’re probably trying to get him his own Digital First series, so he’s in Titans this time. You know fans of villains, they like it when these character steal the limelight, so to speak.

This time, Slade is a family man, and his daughter’s in trouble. She’s apparently been subjugated into the Church of Blood under a very different Brother Blood, and the Terminator wants the Titans to help rescue Ravager. It’s all sort of shady whenever Deathstroke is involved, and Red Hood is more suspicious than the rest. But who are the Titans to refuse to help a fellow “teen” anyway?

Another good thing about these Digital First stories is that, at least as far as the Titans are concerned, the stories are self-contained. That’s the case this week. The problem is set up, the solution placed in front of us and, given there will be some twists and turns, we get to the conclusion by the last page of the issue. How different is that!

Of course, Red Hood largely takes center stage since this is his first encounter with Deathstroke. That doesn’t mean the Titans don’t each get their fair share of stuff to do. They do, and it’s still an engaging read. I still wonder what readers unfamiliar with Jason Todd will think when they get other Titans books and don’t find him there. Or pick up Red Hood’s regular title and find no mention of the group. Oh, well, the multiverse and all…

The characters are largely true to their “real” selves in the comics, with some changes to accommodate this series, of course. My favorite segment in the whole issue takes place early on when the Church of Blood sees Red Hood’s memories regarding how he got involved in all this after being captured. Nice way to catch up the reader pretty quickly, I think!

In a book like this, especially with the end coming just a few pages away, things have to happen at a pretty rapid pace, and they do that nicely here. There’s an interesting point made by Deathstroke when he says that the Titans are “righteous types. You’ll do the right thing… even for the wrong people.” Yeah, that’s pretty insightful for an assassin!

Are things just as they seem to be? No, of course not! But that helps the plot move along, and the Titans’ powers are always underestimated by baddies, such as Beast Boy, Raven, and Starfire. But that’s a good thing in a story rushing to an end like this one need to do.

Brother Blood means that the colorist gets to use red a lot more than usual, naturally. And that increases the tension some, too!

It wouldn’t do for me not to mention that Mr. Hester’s experience and talent at team books works well here, of course! We don’t get much time to ponder what’s going to happen next, and that’s great in this title! We also see a new addition to Blood’s arsenal—the Bloodborne, “living extensions of my very life force,” Brother Blood explains. Nice to see something new appear with a situation around for a long time! That’s Mr. Hester for you—always creating!

The final few panels contain the biggest twist of the issue for me. It was great to see that not everything reset into a nice, neat package. Just what happens next is likely what we’ll discover next week!

As much as I would love to see Mr. Hester write AND draw stories, people always seem to want one or the other. That’s not to say that Koblish and Kalisz don’t do a great job—they do!

I always consider the facial expressions important, and they are well done in this book and series! The action sequences are great, too, so this book works powerfully in this area!

It’s always great to see the Titans in action (especially using this name instead of Teen Titans). I particularly enjoy seeing this version of Nightwing instead of the brain-changed one in his current comic.

I’m going to be interested to see how Red Hood functions in this series. I was one of those who actually liked Jason Todd—not as much as Dick Grayson and other Robins, though. I’d rather see him in his own series, but this will keep me entertained… as long as the other Titans get their fair share of attention!