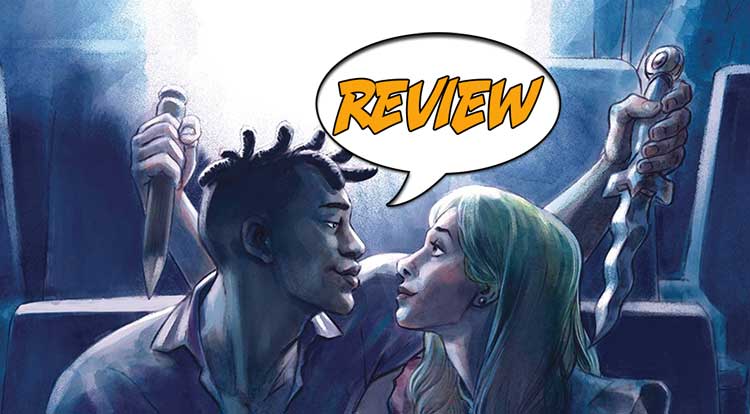 In BUFFY THE VAMPIRE SLAYER #15 Buffy and Robin go on a date – to a terrarium.  But it is a special sort of ‘terror’ they face as the plants go wild for them both.  Will Buffy’s dislike of co-slayer Kendra turn date night into hate night?   You’ll have to read this Major Spoilers review to find out! Previously in BUFFY THE VAMPIRE SLAYER:  Xander is gone, Willow is absent.  The Hellmouth is closed, but Sunnydale is still weird.  Buffy is still the Vampire Slayer, but former best bud Kendra is seriously getting on her nerves.  And a new Master lurks in the shadows, ready to pounce!

It’s so refreshing to come to BUFFY THE VAMPIRE SLAYER #15 and feel like you’ve never stopped watching the television series.  I was a hardcore Buffy fan back in the 90s and enjoyed my weekly dose of Slayer mayhem and romantic follies.  After an iffy start, Buffy became must watch television, a strange concept in these streaming dominated days where your content is available in full at your fingers, whenever you want.

BUFFY THE VAMPIRE SLAYER #15 does a little bit of reclaiming that old, week to week, season to season feel of the show.  Writer Jordie Bellaire manages to fuse, as the television series did so well, the domestic with the unnatural.  Buffy’s nerves about going on a first date with Robin feels true to the spirit of the series, and the character.  Reading the lines of dialog, particularly Buffy’s, cast me back to watching the show twenty and more years ago.

The story itself is standard Buffy fare.  Buffy’s romantic life is front and centre, while in the shadows, the freaks and monsters that live in Sunnydale’s underside conspire to bring the town and its inhabitants undone.  The latter was the least interesting part of BUFFY THE VAMPIRE SLAYER #15, which isn’t a crying shame.  Many episodes from the series had some ho-hum monsters to pad out the more interesting storyline featuring the interactions of the main cast, and their endless quest to out-angst each other.  In that vein, the discussion between Buffy and Robin at the end of BUFFY THE VAMPIRE SLAYER #15 offer some interesting insights into the characters.  Buffy wears the burden of her Slayer-hood badly.  Robin’s point that she sees herself as being a martyr is very close to the bone.  Buffy’s self pity is very close to the surface most times, and erupts here as her attitude forces Robin away.

Ramon Bachs has the art duties and does a very good job with the material.  One of the series dirty little secrets is that all the leads, and many of the supporting characters, were impossibly good looking.  Which means that the comic is much the same.  Buffy is rendered very…maturely, more so than one would expect for a 16-17 year old woman, but hey, fighting all those demons does age a person!

Looking through BUFFY THE VAMPIRE SLAYER #15 one can see that Bachs has deliberately not set it in the modern day – there’s nary a smartphone or computer in sight.  The clothing the characters wear feel right for the television series, down to Buffy’s low riding jeans and her halter tops that in the real world would’ve flown right off once the fighting started.  Bachs is very good at the character moments, especially during Buffy and Robin’s confrontation.  Buffy with crossed arms, and a slightly tucked in chin demonstrates in one image her fragile self regard and defiance at what Robin is saying to her.  Elsewhere, the action scenes are very dynamic, with excellent pacing demonstrated through varying the size of panels.  Buffy is certainly more convincing in these fight scenes than those in the show!

BUFFY THE VAMPIRE SLAYER #15 feels like its reaching back to the television series for inspiration, particularly with regards the interpersonal dynamics between the leads.  And as in the series, there’s a good balance between all out monster fighting, and the more personal moments that made the show such an appealing viewing experience.  There’s a lot to like in this issue and much to look forward to.

A nice blend of modern day storytelling and what made the television series so good, BUFFY THE VAMPIRE SLAYER #15 is a solid entry in a great series that is layering on the mystery and drama in healthy dollops - just like the show!
Boom Studios Buffy the Vampire Slayer ed dukeshire Jeanine Schaefer jordie bellaire ramon bachs Raul Angulo Review
Share. Twitter Facebook Pinterest LinkedIn Tumblr Email
Previous ArticleMajor Spoilers Question of the Day: Inexplicably Attractive Evil Edition
Next Article So You Want To Read Comics – Pet Owners Edition