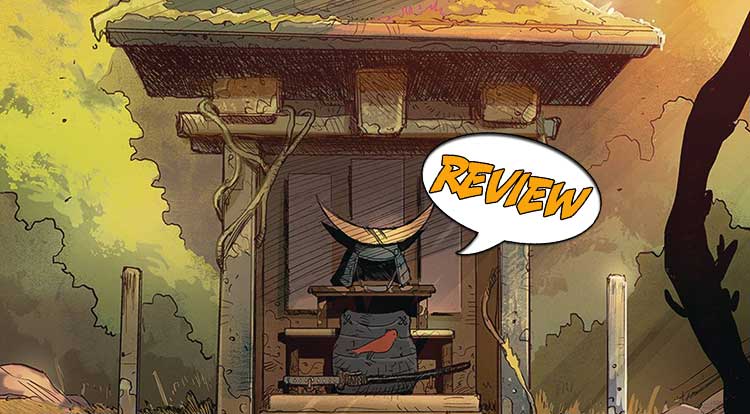 It started on the Island, and now it ends there. Can the Islanders come together to fight off the Shogun, and how can they survive the horrifying Byōnin? Find out in Ronin Island #12 from BOOM! Studios.

Previously in Ronin Island: In bringing refugees to the Island, Hana and Kenichi inadvertently draw the Shogun and his Byōnin with them. A couple of the Shogun’s men, realizing that they are prisoners or less here, steal the big boat in an attempt to reach the Shogun. Hana and Kenichi stop them, burning the boat in the process. Back on the Island, the islanders prepare to kill the remaining prisoners because they too tried to run away. Kenichi’s mother blames Hana for their troubles, calling out the poorness of her people, and calls the refugees trash. This prejudice is met by Hana pointing out the hypocrisy of the Island’s ideals. The prisoners are spared. At sea, the bandit chief and the Shogun realize this is more of a fight than they had anticipated, and the Shogun decides to simply send in the Byōnin!

Ronin Island #12 opens with Hana running back to save the last Islander, telling him to go to Sato in the small boat. Sato urges Hana to come to, reminding her that the Islanders don’t care about her. With a retort that sums up the situation beautifully, Halmoni tells him that that isn’t what matters – it’s that Hana cares about them. How wonderfully simple and profound this is. Hana’s heroics rally some of the Islanders to fight the monsters, and they find out the hard way that they’re awfully hard to kill.

Some of the injured Byōnin merge, forming an even bigger monster. Hana is determined to take it down herself, but Chakan pulls her back. They have to be careful – if the monster gets too big, it will release its spores. This is a logistically complicated battle, and it only gets worse as the Shogun draws near. He’s counting on the creatures sporing so he can simply wait until everyone is dead and take the Island for himself. He sends the bandit chief in with his men, and his subsequent attack from the ship conveniently takes most of the bandits out too. Hana orders a retreat, and Kenichi gets people moving, including the last surviving bandits who have been abandoned here by the Shogun. Hana, meanwhile, has a plan to draw the Byōnin downwind so when it spores, the spores will blow off the Island. I love how clever this is.

But Kenichi can go one step further. As his mother gloats that Hana sacrificing herself is the only worth she has, he tells the Islanders to evacuate the village and burns it, and the monster. It bursts into a cloud of spores, many of which land on the Shogun’s ship. The Shogun is transformed and, in a last heroic action, Sato beheads him.

But the end of the battle is not the end of the story. There is an epilogue that shows the progress with rebuilding, which doesn’t just refer to setting up new homes and fields. Rebuilding also must come to the people and their attitudes. Constructing a new house is easy compared to winning people over, but that’s the only way to start a meaningful change. And what a powerful metaphor this is, especially in these times.

EXCITING THROUGH TO THE END

The art of Ronin Island #12 flows so wonderfully with the dialogue. They work together to lead us through a big, chaotic battle so it flows around us. We’ve seen a lot of the Byōnin in earlier issues, which sets them up for the grand finale with the biggest and baddest one we’ve seen yet. As it keeps getting bigger, the colors shift and become more red like some enormous, infernal juggernaut. By the time it meets its demise, we believe that’s its spores can travel the distance to reach the Shogun.

We’ve grown fond of a number of characters over the many chapters to this story. We see them all here in small moments, desperate or heroic. The facial expressions are so intense. From fear to determination, everything is clear. But the most chilling of all is the Shogun. He has been slimy and manipulative since the beginning, and I have to say that his character arc does not involve any change to his personality whatsoever. Against a backdrop of so many small heroic moments, to see him smiling, sending his allies to their deaths, and even laughing about it all really makes his demise all the more satisfying.

Ronin Island #12 is undeniably a strong ending to this story, a story that ends like a chapter in Hana’s and Kenichi’s lives. We’ve seen them grow apart, grow up, and learn a lot along the way. There have been so many thoughtful moments throughout and so many difficult realizations, but I love how Hana and Kenichi have learned to accept people for what they are and yet work to improve their lives, because it’s the right thing to do.