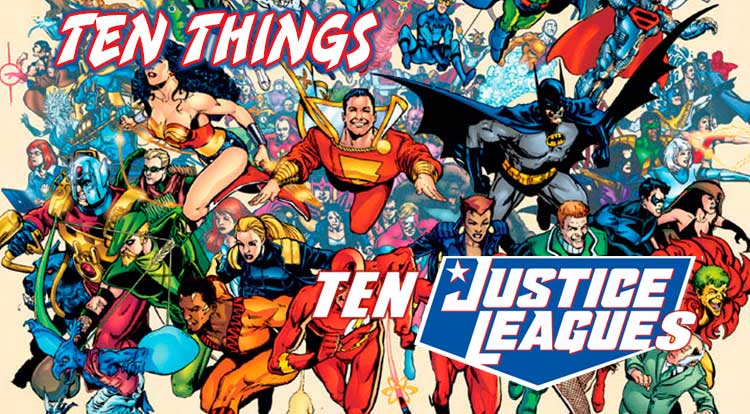 It’s been a long time since the Appelaxian invasion of 1961, and there have been a LOT of threats (and members) since. Welcome to Ten Things: Ten Justice Leagues!

Whooshman-Bicarbonate Films, in conjunction with An Amateur Comics Historian and the late Mike Sekowsky, Presents: After a number of planets shrunken and planet-napped by Brainiac were returned to their previous size, the Justice League realized that they needed to explore the previously-empty sector of space, known as The Ghost Sector. Led by Cyborg, the team includes Jean-Paul Valley, Starfire and adorable murderous alien kitty-cat Dex-Starr, among others, and plumbs the strange and ancient depths of space, as their mission to protect becomes a series of cosmic mysteries. Though not legally or formally a Justice League, the Super Buddies’ roster consists entirely of former members of the League (and Mary Marvel.) They operated as a for-hire hero service with an 800 number, with an office in a strip-mall in Queens, and nearly caused an interstellar incident before the “real” Justice League stepped into assist. There was also a sojourn into Hell itself, but it’s unclear whether or not that canonically happened in the Prime reality or not. During a time when the Justice League was operating under the auspices of the United Nations, The Martian Manhunter created the covert Task Force to handle missions unsuited to the high-profile capes. Initially operating with a rotating roster, they eventually settled on a roster featuring Triumph, The Ray, Gypsy and Despero (possessed by the mind of artificial man L-Ron), even giving up their individual looks for a (hideous) team uniform. After the dissolution of the Justice League of America, the team’s members (a Who’s Who of guys you should probably have more respect for, including Freedom Beast, the second Aztek, Gregorio de la Vega, The Ray, Ryan Choi, Black Canary and others) picked up where that group left off. As much a think-tank as a villain-smashing organization, they are at least theoretically still active as of this writing, though they haven’t been used since their debut in 2018. The specialized branch of post-Rebirth League dedicated to supernatural and arcane threats, their membership inexplicably includes scientist Man-Bat, Animal Man and Wonder Woman. Even with their odd membership, the group has stopped a vampire war, defended The Books of Magic and death with one of the periodic “Magic is BROKEN!” situations.

I understand that Wonder Woman was created at least partially from magic, I just… don’t see the point of her being on this team. I mean, I was born in a car, that doesn’t mean I can rebuild an engine. Consisting of the members of one of the Injustice Leagues that keep popping up, Justice League Antarctica was established by Max Lord with one intention: Keeping these idiots, and Green Lantern G’nort out of his hair. After a battle with evil, genetically modified penguins, the team was disbanded (as they were essentially useless, good press or no) and moved on to other pursuits. Several of them were killed in action with the Suicide Squad, while team leader Major Disaster eventually gained legitimate membership in the primary Justice League as a hero. Confusingly, though their adventures were presented under the title “Extreme Justice”, Captain Atom’s splinter team insisted that they were the REAL Justice League. With a focus on domestic problems, this League tried to be “proactive” in battling evil, only to find the same thing that every proactive super-team discovers: The superhero biz is, by definition, reactive, as superhumans who go out looking for trouble are generally the bad guys. Their group battled the future villain Monarch, adding even more twists to his already convoluted history, but are probably best known for discovering the first canonical take on The Wonder Twins. X-TREEEEEEMMEEE! After going international, thanks to the leadership of Max Lord, the League established a resident team in Europe, consisting entirely of American heroes who didn’t speak any of the continent’s native languages. This is especially problematic, due to their headquarters being in France, where people generally speak French. JL Europe is notable for its number of missing members, including the often-absent Animal Man and Wonder Woman, who NEVER actually appeared after the team’s formation. Almost known as The Justice League of Canada, the JL United team came together to stop the schemes of Thangarian criminal Byth, some of which involve Ultra, The Multi-Alien. They’re also the team that encountered a strange iteration of the Legion of Super-Heroes that seemed to combine multiple realities into one, but then never appeared again. The presence of Hawkman and Adam Strange meant a lot of cosmic adventures for the JLU team, as well.

1) THE JUSTICE LEAGUE OF AMERICA Often disrespectfully mocked as “Justice League Detroit”, this League was built with the express intention of having a full-time team, rather than the part-timers showing up whenever they could, as in the satellite-era JLA. To that end, experienced heroes Zatanna, Elongated Man, Aquaman and Martian Manhunter began training a team of young heroes who successfully defeated a number of cosmic-level threats before being systematically murdered by Professor Ivo. Contrary to what you might read, they were a perfectly fine League that dealt with a VERY dangerous era, only coming apart under stresses that would have challenged even the much-vaunted Big Seven team. The outfits and haircuts may not have aged well, but you can’t fault their heroism.

This week’s topic, Ten Justice Leagues, is all me, but feel free to follow along @MightyKingCobra and suggest your own topics!  You can also get five-days-a-week Ten Things madness on Twitter or check out the full Twitter archive here! As with any set of like items, these aren’t meant to be hard and fast or absolutely complete, if only because we haven’t even touched on El Dorado’s Justicia team or Kenan Kong’s Justice League of China.  Either way, the comments section is below for just such an emergency, but, as always: Please, no wagering!