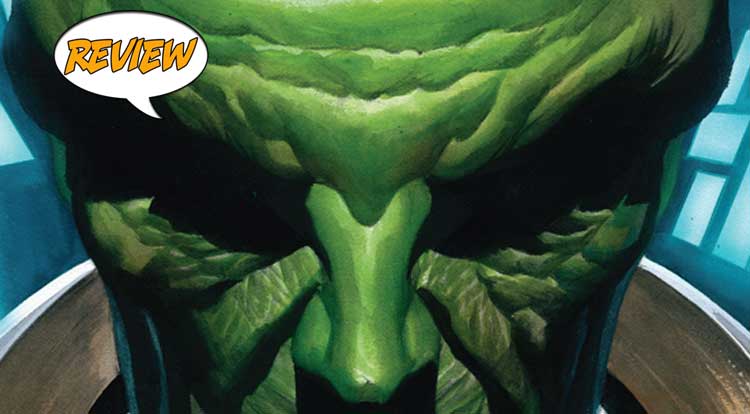 Prepare to follow The Leader… whether you want to or not.  Your Major Spoilers review of Immortal Hulk #34 from Marvel Comics awaits! Previously in Immortal Hulk:  The Thoughtful Man is here and his dreadful thoughts are vast and dark enough to swallow even the Devil.  Samuel Sterns walked through the Green Door and gained knowledge.  Follow him through the journey of his life, from his rebirth to his final experiment…

This issue opens with the origin of The Leader, waaaay back in 1965, with an added wrinkle: The gamma explosion that empowered Sam Sterns actually killed him, and sent him through the Green Door.  He didn’t remember it at the time, it seems, but now is fully aware of his death that time… and the next, and the next and the next.  Nearly every moment where we, as readers, were told that Sterns miraculously excaped unharmed was actually another death and resurrection, another interaction with the thing on the other side of reality, and each time, his genius grew.  Every loss, every seeming doom, every battle with another Hulk, even his time with the Thunderbolts has led to a more intelligent Sam Sterns, which means a more intelligent leader, which now means a self-aware leader with the power of what’s probably a demon behind him.  Oh, and as the issue ends, a Leader who is working with Brian Banner.

THE HISTORY OF THE LEADER

It’s really impressive how well Ewing is able to repurpose existing moments into the greater narrative of this horror tale, even things that seemed silly at the time.  (Witness Sterns’ transition to the Red Leader and a deal with Mephisto, once almost campy, now terrifying.)  Even the montage of his various deaths takes on horrible new meaning here, thanks in part to Guice’s dark and disturbing pencils.  There’s even a sequence with the utterly ridiculous “Big Brain” McFarlane leader that makes him truly frightening and unnerving to look at, something that just shouldn’t be possible with the silliness of that design.  Best of all, even though this issue is mostly a monologue by The Leader, it doesn’t feel self-indulgent or like filler.  Indeed, without this examination of Sam Sterns’ new lease on after life, I don’t think that he’d fit nearly as well into the tone of Immortal Hulk, and that’s a really impressive achievement.

BOTTOM LINE: ONCE AGAIN, A DISTURBING TAKE ON SOMEONE WE’VE SEEN 100 TIMES BEFORE

In short, Immortal Hulk #34 is all about surprises, taking a character nearly as silly as Xemnu (who was a terrifying presence during his arc), nearly as death-prone as Rick Jones (whose resurrection is likewise skin-crawling stuff) and perfectly matched against our hero and making him a figure of terror, with moody art earning 4.5 out of 5 stars overall.  If you’ve been looking for a good jumping-on point for Immortal Hulk, this might be your entry point, but I’ll tell you right now: You’re going to want to go back and read the rest once this issue is done.