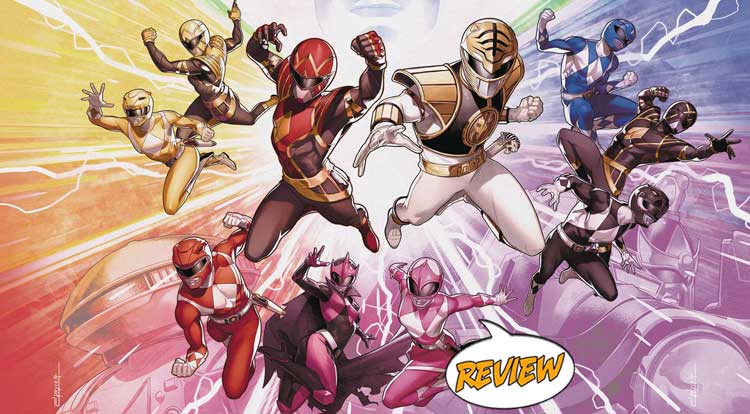 Previously in Mighty Morphin’ Power Rangers: The Mighty Morphin’ Ranger and the Omega Rangers unite, along with surprise new allies to versus The Anointed.  Everything has been leading up to this, but who has been waiting in the shadows to return?

Dayne, the alien bounty hunter, has returned to engage the Mighty Morphin’ Rangers in battle, while The Anointed have teamed up with former Blue Omega Ranger Kiya to cripple the Omega Zords and tie up the space-faring team.  Worst of all, the Ranger Slayer is missing, having set out to find some sort of edge against their foes, all of whom are mainlining power straight out of the Morphing Grid, while Adam, Rocky and Aisha aren’t sure where they fit in the Power Rangers heirarchy.  All seems lost when Aisha has an idea: Sending Tommy and his Zord to assist the Omega Rangers, she and Adam swap weapons, and attack Dayne with entirely new maneuvers.  They actually manage to get the upper hand, as Tommy and Jason morph their Zords into one giant Red Tigerzord, taking down their enemies’ greatest weapons, but leaving themselves open to a swarm of The Anointed.  That’s when Ranger Slayer arrives with backup: The Violet and Orange Solar Rangers, last seen a dozen issues ago at the end of ‘Shattered Grid’.  Things get smashy, relationships are mended, new friends are made but the last page shows a strange “meteor” crashing to Earth…  with a terrifying message.

DID NOT EXPECT TO SEE THAT CHARACTER AGAIN

The last page reveal is a big one, clearly setting up a new arc for the Mighty Morphin’ team, but the resolution of all the plot threads isn’t exactly as satisfying as I had hoped.  After being set up as the most terrible foe yet, Dayne gets taken out a little bit easily for my tastes, and his freeing of Zedd from captivity after his defeat feels awkward, like the writers needed for something to happen to put the red guy back in play, but weren’t sure what.  Trini’s final battle with rogue Omega Kiya is much more satisfying to me, especially when Ziya tries to break Trini’s concentration, only to get smacked in the head and told “You talk a lot when you’re scared.”  It’s a stone cold bad@SS moment for Omega Yellow.  Jason and Tommy’s reconciliation is somewhere in-between, feeling motivated, but somehow still unsatisfying, leaving the book batting about 66% on resolutions.  The art helps to make up for  some of my concerns, especially as regards big Zord morphing, but the storytelling is occasionally questionable.  The arrival of the Solar Rangers should be one of the big moments of the issue, but it’s difficult to tell what is happening during their cavalry moment, requiring a close read and knowledge of the series to recognize.

Even with those concerns, Mighty Morphin’ Power Rangers #50 is a better-than-average comic book, bringing multiple story threads together and bringing back a couple of friends that I didn’t expect to see again, with art that works in the broad strokes, earning 3.5 out of 5 stars overall.  Even if the resolutions didn’t quite stick the landing the way that I’d hoped, it’s impressive to see this many characters in the mix and not feel as though half the team is getting short-changed.  And honestly, I’m cautiously excited about that final page moment (which you’re definitely going to want to read, if you’ve been following this book at all.)