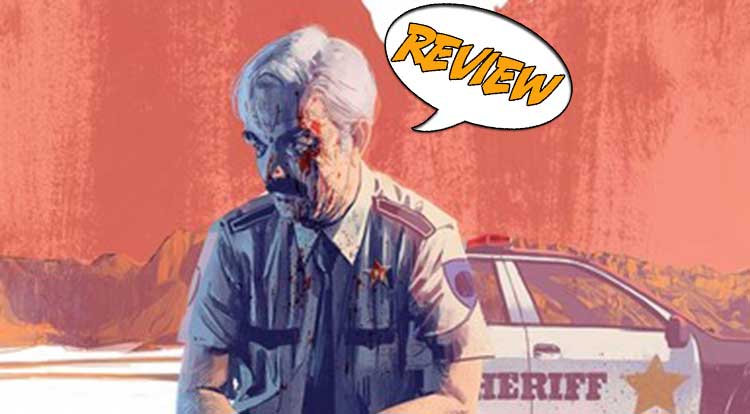 In THAT TEXAS BLOOD #1  from Image Comics, Sheriff Joe Coates celebrates his 70th birthday by strapping on his gun and doing God’s work in God’s own country.  Sure, the locals drink too much, won’t help with the rattlesnakes, and tend to shoot their wives, but it’s all in a day’s work.  What’s that about killing the old sheriff’s brother when he went crazy?  You’ll have to read this Major Spoilers review to find out! Previously in THAT TEXAS BLOOD #1: Sheriff Bob Coates carries around the guilt that comes with killing a man in the line of duty.  He tries to shake it off, but the dreams keep coming, and the guilt keeps on creeping up on him.  Still, he’s a good cop, and just turned 70 to boot.  He keeps the town in line, cleans up the rattlesnakes in the front yards of people’s houses.  He’s a good man.  But that guilt sure ain’t goin’ away…

Ambrose County Sheriff Joe Coates is a good man.  A straightforward, simply fellow who wakes up on his 70th birthday, thinking everything will change with that milestone.  It doesn’t, to his surprise.  Instead, he puts on his pants the same way as he did before and heads into work.

Of course, Sheriff Coates isn’t just a straightforward fellow.  No, sirree.  He’s a Texas lawman, in the greatest state in the union!  Ambrose County is always hot, the people always talk slow, and the simple things in life are the one’s that matter.  Like that casserole his wife has promised him for his birthday dinner, only, he has to fetch it from family friend Ruth, and return it home.  The quest for the Holy Grail it ain’t, but a quest is a quest.  Problem is, things keep on getting in the way.  And when Sheriff Coates does visit Ruth, he misses a few key clues, which come back to haunt him at the end of THAT TEXAS BLOOD #1.

Readers of my reviews of CRIMINAL will recognise I love this sort of story.  Crime mightn’t pay for the criminals, but for the reader, the genre provides an infinite variety of delights.  THAT TEXAS BLOOD #1 is in that same vein.  There’s a decent sized cast, all with their own quirks and foibles.  Interestingly, Sheriff Coates isn’t an investigative genius.  He’s an old man, who admits to slowing down (and not liking it).  The live and let live attitude of his little corner of the world will have massive repercussions later in the series, but for now, Coates is just another in a long line of stolid lawmen, doing their best in a fallen world.

Having artist Jacob Phillips, who worked with Ed Brubaker on CRIMINAL doesn’t hurt a smidge, neither. His is a very straightforward art style – lots of straight lines for buildings and vehicles, and people full of character in their faces and postures.  His use of colors, particularly towards the end of THAT TEXAS BLOOD #1, is pretty masterful.  A red sunset matches the condition of the driver, and the back window after he blows his brains out.  It all feels seamless.

The real beauty in THAT TEXAS BLOOD #1 is Sheriff Coates.  As I intimated before, he’s no Sherlock Holmes.  He’s just a straight up and down officer in a small town, in a small county.  Other than what happened to him and the previous sheriff years ago, the reader gets the impression the hardest part of the job is the coffee he’s forced to drink.  Writer Chris Condon writes him as a man who has seen a lot, isn’t happy with some of it, but is largely content with his life and its course.  The dream sequence (like all such things) indicates, however, that beneath the surface, there are some dark memories that threaten to bubble to the surface.  It makes for many fascinating possibilities, all of which I eagerly look forward too.

THAT TEXAS BLOOD #1 goes to the top of my monthly list of reads.  A slow burn opener that reveals much about the main character through the wry interactions with his wife and the other people in the country, THAT TEXAS BLOOD #1 promises to be an entertaining, thrilling series.

Crime does pay, especially for the reader. Those rewards can be found in fine series just like this one. I strongly urge all of you who are reading this to go out and by the opening issue of THAT TEXAS BLOOD - the writing and the art are very strong, and fans of CRIMINAL will be in for a treat.
Chris Condon Image Comics Jacob Phillips Skybound Entertainment That Texas Blood
Share. Twitter Facebook Google+ Pinterest LinkedIn Tumblr Email
Previous ArticleWayne’s Comics Podcast #440: Interview with Dave Chisholm
Next Article Retro Review: The Marvel Family #1 (December 1945)