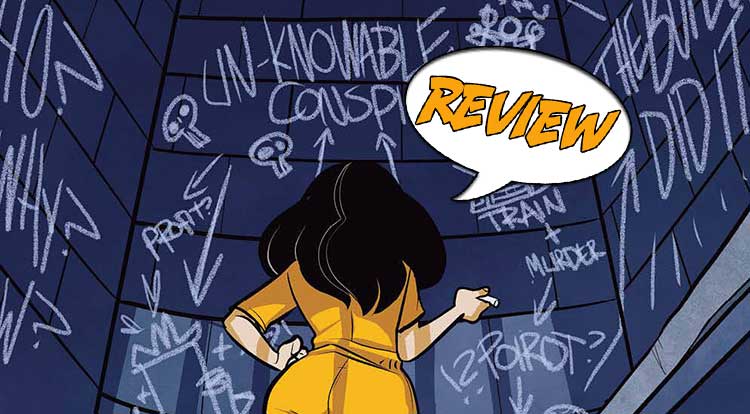 Miyamoto is not dead (whew!), but Lottie is about to be charged with his attempted murder. Until Commissioner Boswell makes her an offer… Find out more in Wicked Things #2 from BOOM! Studios.

Previously in Wicked Things: Charlotte (Lottie) Grote is off to university, and as her mom tries to get her to clean out her room, we learn she was a child detective. Is she past her prime? She was never featured in the magazines. Then she discovers she’s been nominated (by her friend) for Teen Detective of the Year. Before long, it’s off to London and the Savoy for the awards. Charlotte meets some of her rivals, and it’s just like high school where everyone has their clique, and you aren’t in it. She has a chance to talk with one of her idols, Miyamoto (from Japan), but it’s through his interpreter (Miss Maki), and Lottie does not realize that she is being savagely misinterpreted. The weekend continues to get worse, until she gets an invitation from Miyamoto to help him with a case. Lottie goes up to his fancy suite, pokes around a little – and finds Miyamoto down. Before she knows it, Lottie is the prime suspect in his attack.

ON THE OTHER SIDE OF THE INVESTIGATION

As Wicked Things #2 opens, the police interview some of the other teen detectives who have nothing good to say about Lottie. Miss Maki goes over the top to portray her as hostile and aggressive. Miyamoto, badly wounded, is recovering from surgery and is in a coma – he’s out of the picture for a while.

Lottie is in police custody. She’s helped land others here but isn’t so good at handling it herself. She professes her innocence. She realizes her return train ticket is only good through today. She’s not sure whether to go on hunger strike or eat the awful food they provide. It’s a good balance between taking this seriously and bringing humor into her situation. Her first interview with the detective on the case is tense and charming – neither of them get anywhere, and Lottie has the wherewithal to ask for a lawyer. Sunita Kaur arrives and by that time Lottie has pages of notes outlining her case already. The lawyer is overwhelmed, and even Lottie realizes how crazy her story sounds.

Meanwhile, Claire is back at the Savoy talking with the other detectives and scouting for clues on her own, at least until the police find her sneaking around. Claire is not the only one on Lottie’s side; her mother Karen and sister Sarah soon arrive as well with some delightful dialogue and sisterly rivalry.

The Police Commissioner takes Lottie aside for a talk. They can’t keep her indefinitely. But her case is complicated because the Japanese government wants things handled quickly. The Commissioner knows about Lottie and has been keeping an eye on her, and she proposes a solution. She’ll be let loose, but on a very short leash, assisting the police and following the rules. No pressure!

The art of Wicked Things #2 is simply delightful. The stakes are serious, but there is still a lot of humor to be found in Lottie’s predicament, and in her. She’s a little neurotic and overly dramatic, and that is just made worse by being in custody while knowing she’s innocent. Her expressions are so fun as she lets herself ramble on, then realizes how crazy she must sound. Every time reality hits her again there’s another shift. But as tough as things are, Lottie keeps bouncing back, or trying to.

And she is surrounded by characters who react to her in ways that not only make sense, but that are also amusing. Lottie is a handful. We see this in the detective’s reaction to her when she does not fold under his questioning, and again when he finds out (surprise!) that she’s going to be working with his team. Never has a worst-case scenario seemed so funny.

BOTTOM LINE: CAN LOTTIE HOLD HERSELF TOGETHER?

Wicked Things #2 is setting up as Lottie’s biggest challenge yet on multiple fronts. I like the locked room mystery feel to the story so far, and that Lottie feels the stakes acutely. She has a lot of room to grow as a character, and it will be fun to see how she handles this.