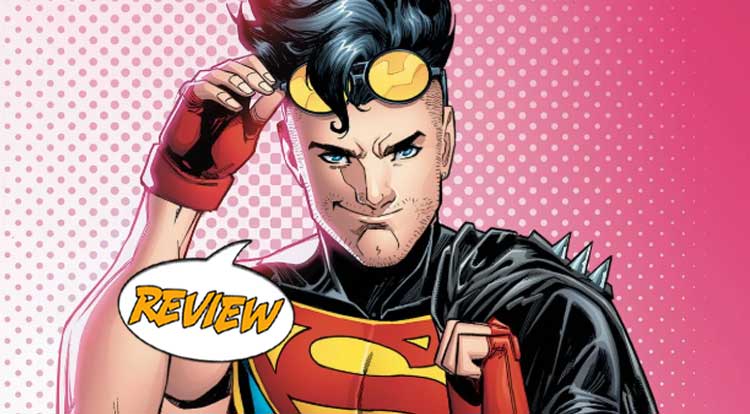 What would you do if the universe retconned you away and everyone moved on without you?  Your Major Spoilers review of Young Justice #15 from DC Comics awaits! Previously in Young Justice:  Young Justice versus S.T.A.R. Labs!  What happens when a universe reboots right under you?  Conner is about to find out!  The entire Young Justice team confronts the evil genius behind S.T.A.R. Labs and the truth about Conner Kent.  This will bring Conner to the doorstep of his namesake, Clark Kent, to find out more about himself and the DC Universe.

After the events of last issue, the nefarious Dr. Glory escaped through a space/time portal, only for Superboy to follow directly behind in an attempt to finally bring her to justice.  He manages to pull her back, with a little help from Wonder Girl and the rest of Young Justice (as well as Naomi, current H-Dial wielder MIguel, Aqualad, Arrowette, Spoiler, Sideways and the Wonder Twins.)  Once she’s safely unconscious, Impulse finally reveals what he knows: After finding his own memories to be strangely “mushy”, Bart had set out through the Speed Force to find out what was actually happening, and discovered the repeated rebooting of the DC Universe.  Apparently, when Dr. Glory captured Superboy and sent him to Gemworld, it was a key moment when the universe rebooted, leaving Kon-El behind and essentially wiping him from the time stream entirely.  Impulse also discovered that Young Justice was wiped, as well, leaving Superboy to try and deal with the news that he’s actually a clone of Superman and Lex Luthor.

That’s when he explains to Glory that he can do whatever he wants, up to and including Luthor-style revenge.

There’s something really satisfying about a Bendis finale, especially one that has been building for as long as this one has, and the reunion of Young Justice in this issue is a great example.  Seeing Kon and Tim and Cassie back together is really nice, even with the sheer number of other people present, and Bart being the one to unravel the mystery is also quite nice.  Seeing Dr. Glory finally arrested by the FBI doesn’t hurt, either, though I feel like a smaller cast might have made this one hang together a little better.  There are tons of side-conversations and moments that don’t quite come together for me (Drake announcing that everyone present can be part of Young Justice, only to have someone immediately contradict him that it’s too many people is very bothersome) and just enough irregularities with the art to bring things down a couple of notches, though the final page where Superboy asks Impulse to fill in the WHOLE story is a really strong moment visually and narratively.

BOTTOM LINE: AND STILL A CLIFFHANGER!

All in all, though, Young Justice #15 sticks the landing enough to make me interested in what comes next and seeing how (or, more likely with modern DC, *IF*) these shocking reveals affect the world going forward, leaving the issue with a better-than-average 3.5 out of 5 stars overall.  Much as with last week’s Legion of Super-Heroes review, some, but not all, of the flaws of the previous issues have been overcome with this successful chapter, at least enough to make this one satisfying.  I’ll be interested in seeing where this goes next, though, especially with the issue establishing a large, nebulous group of possible Young Justice characters.  It might be nice to see more develoment of Aqualad, Sideways and the rest.