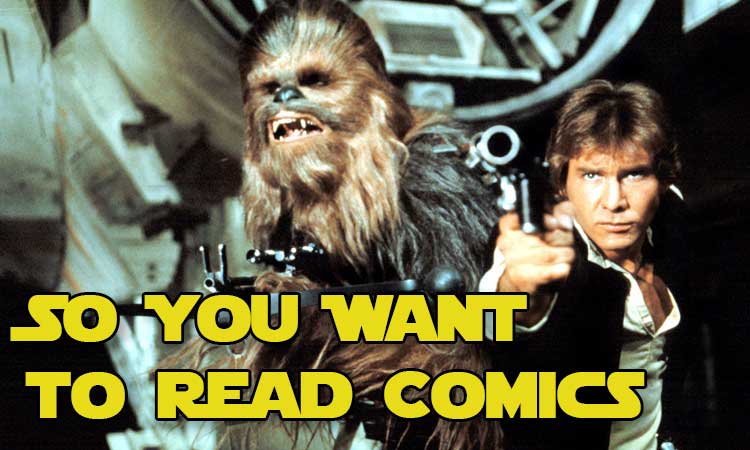 So You Want To Read Comics: Star Wars Edition

It’s a new week and a new installment of “So You Want To Read Comics”, our effort to try and introduce new readers to comics based on their other interests.  This week we’re taking a look at comics for fans of a little saga, who everyone has a real strong opinion about, called Star Wars.

In 1977 a little film about light vs. dark, spaceships, family, destiny, laser blasters, and wookies, captured a generation’s imagination.  Since then, it has permeated every aspect of not only pop culture, but modern society as well. It shows no signs of stopping either as every year, new fans are pulled in by the epic tale of a group of plucky rebels fight an oppressive empire across strange planets with fantastical weapons and the stories of all those who live in this galaxy far, far, away.

But what should you check out, when you’re ready to see what kind of space adventures comics have to offer?

You can also purchase this issue via comiXology

What do you get when you combine a pair of lovers from opposing factions, a collection of bounty hunters with varying moralities, a race of sentient robots with TVs for heads, and a young girl trying to come to terms with this chaotic universe she’s been born into?  Why, you have Saga, one of the most celebrated comic book series in recent history. Much like Star Wars, Saga strays away from hard science-fiction into more of a fantasy realm. Also, like Star Wars, Saga doesn’t make the major focus of it’s story about the big galactic conflict, but rather the people who are fighting it and those who are just caught up in it as they just try to fulfill their purposes and find their own ways through life. It should be noted that Saga is intended for adult readers, which makes it perfect for fans of Star Wars who are longing for a bit more maturity than what most of the Star Wars fiction has to offer.

You can also purchase this issue via comIXology

Being that the Star Wars name has graced movies, novels, television shows, videogames, audiobooks, board games, actions figures, and cartoons, it shouldn’t be much of a surprise that there’s been some Star Wars comic books.  In fact, there’s been a whole heck of a lot of them. The problem is that the sheer number of them makes them a little intimidating to get into.  It’s very hard to know exactly where you’re coming into the story, which series ties into the one you’re reading, and are you going to recognize the characters in it? That’s why Lando is such a good series to get into.  It features a well-known and beloved character, it’s self-contained, it’s a short series, and it doesn’t rely on a lot of Star Wars minutia. Plus, it’s hard to pass up on a creative team like Charles Soule and Alex Maleev, both of whom are comic veterans who know how to make a good book.

So what do you think?  Will these scratch that Star Wars itch? Do you have some suggestions yourself?  Let us know in the comments.