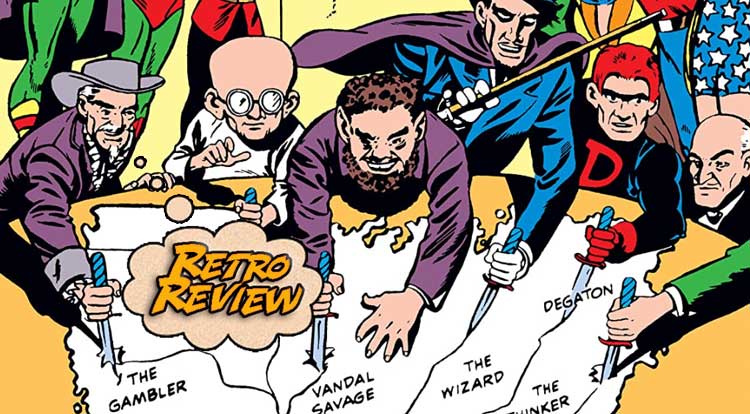 They’re all over CW TV in ‘Stargirl’, but do YOU know the Injustice Society of the World?  Your Major Spoilers (Retro) Review of All-Star Comics #37 awaits! Previously in All-Star Comics:  As the first super-team in comics, the Justice Society broke a lot of ground.  But once you’ve created a coaltion of good superhumans, it’s only natural that there be an equal and opposite reaction among the villain community.  The players were among the most dangerous creeps that the DC Universe had to offer, circa 1947: Criminal magician W.I. Zard, known known to his victims as The Wizard!  Mob boss Clifford DeVoe, mortal enemy of The Flash, known as The Thinker!  The time-traveling butt-monkey called Per Degaton!  Immortal madman Vandal Savage!  Green Lantern’s foe and Colonel Sanders impersonator, The Gambler!  The telepathic tyrant called Brain Wave!  Together, they form a cabal of evil the likes of which have never been seen, one-upping the JSA as The Injustice Society… of THE WORLD. Aftter being invited to a special radio program in their honor, the JSA is stunned to find the announcer, crusading attorney Carlton Swain, denouncing them and the very concept of justice itself.  Swain opens fire on the JSAers, who (thanks to Wonder Woman’s bracelets) are unharmd by the assault.  Returning to their headquarters to regroup, the team hears of multiple jailbreaks across the country, while some careful detective work by Dr. Mid-Nite reveals that Swain is working for a mysterious Injustice Society of the World who wants to defeat them and take over the United States.  As is their custom, they split up to find their opposite numbers, unaware that the clues are actually just a trap! In quick succession, Vandal Savage makes good on his promise to cpature Hawkman, though the Winged Wonder avails himself well against a horde of prisoners, then Flash saves a governor from assassination, only to be lured into invisible shackles by The Thinker, while Green Lantern manages to protect a batallion of tanks from the powers of Brain Wave, only to fall prey to the old boomerang routine and falling down a dmountain to his doom.  Then comes the most shocking moment of the entire issue, a moment that always sticks out in my memory of these Golden Age books…  I call it “The Time The Atom Looked Amazing!” That’s the work of a young Alex Toth (creator of Space Ghost, the Herculoids and more, and one of the tragically underappreciated artists of comics) there, showing us an Al Pratt who loked lithe and cool and super-heroic, taking down an enemy agent posing as a U.S. Army general, then wading into the combined Injustice Society without hesitation.  He, too, gets captured, as does Doctor Mid-Nite, after engaging Per Degaton. Mid-Nite awakens in a holding cell with his teammates (including Wonder Woman and Johnny Thunder, who were sidelined at the beginning of the adventure, but captured by Per Degaton), who combine their wits and powers to escape, only to find that it’s another trap-within-a-trap, as the Injustice Society puts them on trial, with a jury full of criminals and super-villains.  As the judge renders his verdict, Brain Wave suddenly recognizes his voice… as Green Lantern!  The heroes leap into action, with Wonder Woman taking down nearly the entire Injustice Society with one powerful attack, making the JSA seem like idiots for back-benching her, while the rest of the team takes on The Wizard, their strange new leader. With the heroes focusing on the escaped convicts, the capture of Mr. Zard is left to the kids of the Junior Justice Society of America (the real-world fan club for All-Star Comics and the JSA), who brtng him down with sticks, rocks and sheer gumption.  It’s an ignominious end for him, but he and his Injustice Society will return multiple time to vex the JSA and even their children.  All-Star Comics #37 is a mixed bag, artistically, with good work from Kubert and Hasen, less great work from Infantino and AMAZING art by Toth combining with a strong Kanigher plot to make for a memorable issue and 3.5 out of 5 stars overall.  If nothing else, it’s a fun little issue that draws you in, even as it makes you wonder why the most powerful JSAers had to sit back at the mansion and play pinochle.

Even if you hate the silliness of things like W.I. Zard, this issue will draw you in, especially the Toth-drawn portions, and entertain you, Golden Age Style.