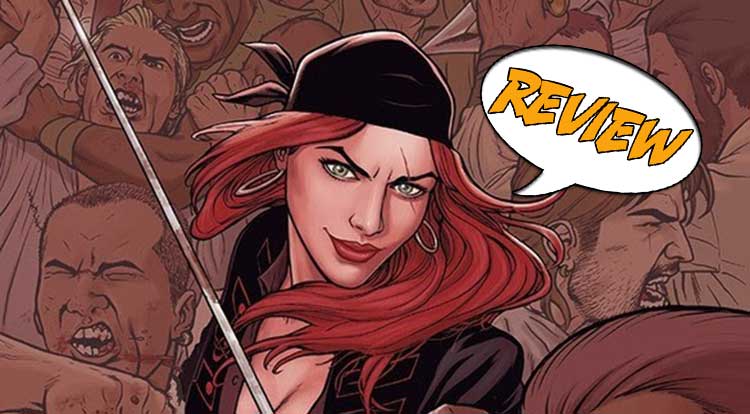 A Man Among Ye #1 Review

A pirate’s life was hard and bloody, and not the life you’d expect for a woman, but it’s what Anne Bonny chose to do. Dive into her adventures in A Man Among Ye #1 fromTop Cow.

Previously in A Man Among Ye: 1720 was nearing the end of the Golden age of piracy, and Woodes Rogers had set out to bring law and order to the Bahamas at long last. Meanwhile, Anne Bonny had become a legend after running away from her husband and joining her lover “Calico Jack” Rackham in his life of piracy. We join them on the high seas…

A Man Among Ye #1 opens off Hispaniola in the Caribbean as “Calico Jack” Rackham and his crew fight a British ship. There is a huge bounty on the notorious Rackham’s head, and someone almost takes him from behind except that Anne Bonny is on the alert, and shoots the soldier. The fight is short and bloody, and there are no survivors but one, an injured soldier who spits in Bonny’s face contemptuously even after begging for his life. At that, she shows her ruthlessness, leaving him where he lies as she sets the ship ablaze. Piracy is bloody work.

But it is not a life of ease, especially not for a woman. She is in a relationship with the Captain, yes, but as formidable as she is on her own, she is also disliked. This is 1720, and the crew look on her as just their Captain’s mistress, and superstition decrees that she is bad luck. As excited as the crew is by their small prize and the opportunity to spend their coin on shore, they give Ann black looks when she walks past. Disgruntled, they don’t see the young blond boy, a survivor from the British ship, who sneaks on board.

On land we meet Governor Rogers who is determined to exterminate all the pirates in the Atlantic and, in particular, Jack Rackham. Rackham left him with a scar that covers half his face and Rogers is out for revenge. Rogers is a former privateer and he understands pirates. I think this is shaping up to be a solid game of cat and mouse between skilled and clever adversaries.

Back onboard ship later in the evening, the stowaway sneaks around as the pirates drink and tell stories. A few of them find the young lad and he gets thrown into the brig. Later yet, a group of very drunk men come down and think it would be amusing to fight this youngster and see just how tough he is. At this point, Anne Bonny arrives wanting in on the fun – and revealing the young lad’s secret.

The art in A Man Among Ye #1 is solid. This is a pirate tale, and everything is a little larger than life. I like the characterizations of Rackham and Bonny. They’re both snappy dressers with a lot of flair. Anne is depicted as having long red hair that flows around her in the wind, decorated with a few strands of beads. Her coat is a black and red version of an 18th century military jacket, and she would be a fun choice to cosplay. She’s portrayed as quite pretty, but she does have some scars and we rapidly see just how tough she is among this crew of not particularly friendly men. This was not a good time period for independent women.

I also like the setup on shore. It takes only a few panels to set up that law and order is now the order of the day in Nasau. Woodes looks brawny and tough, even while dressed in the finery of the day. He is almost cartoonishly broad, but I like the sternness of his face and the use of strong shadows which gives him an even more sinister air.

There are quite a few well-known historical (and legendary) pirates, and I really enjoy that A Man Among Ye #1 has decided to focus on Anne Bonny. This gives room to tell maybe a different kind of pirate tale, and that’s something that makes me excited to keep reading.

Can Jack Rackham and Anne Bonny outwit Governor Rogers, who is determined to kill them both?