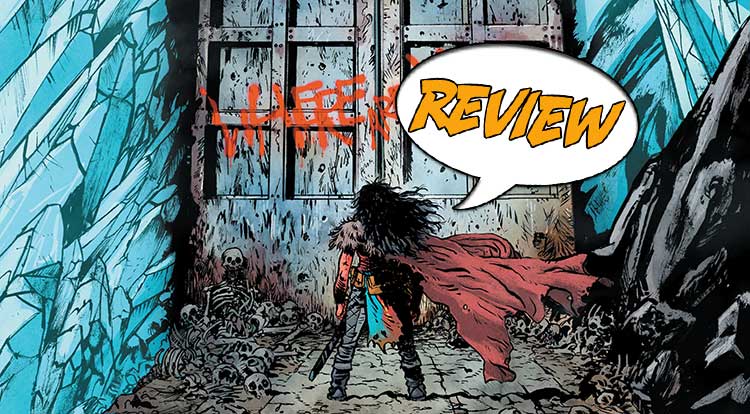 The amazons have been turned into monsters and the world is a desolate landscape.  Diana’s only hope is to find the one person who can help them, but she could never prepare for what she finds. Your Major Spoilers review of Wonder Woman: Dead Earth #3, awaits! Previously in Wonder Woman: Dead Earth: The revelation of the Haedras’ true nature overwhelms even the mighty Amazon Princess, forcing Diana to seek out the one person who can help her: Superman.

The Search For The Man of Steel

Wonder Woman: Dead Earth #3 opens up with Diana and Cheetah sitting by the fire.  Eventually Cheetah informs her of how the world came to be in the state it is. Turns out that humanity and the amazons came into conflict due to climate change and environmental destruction.  This war eventually escalated and nuclear weapons were utilized, with unintended consequences. Back on Themyscira, the remaining amazons in their monstrous forms gather to launch an offensive to eliminate humanity once and for all.  Back with the humans, things have deteriorated with their food and supplies being depleted.  Dee reveals that she has stolen The Lasso of Truth to Theyden.  He informs her that he has been tracking Diana and that she’s on the way to the fortress of solitude.  Dee takes off to find her and exact revenge for being abandoned. Wonder Woman makes it to the fortress and everything after that, really shouldn’t be spoiled.

One Heck of A Second Half

When we get the revelation of what happened from Cheetah, I have to admit, I wasn’t thrilled.  The apocalypse brought on by climate change and rising waters has become a bit of a cliche.  Even when you throw in a nuclear war because of this, it doesn’t really create a unique scenario, it actually came off as a  cheap and easy explanation.  But, when we reach the second half and that explanation is expanded upon and the reader is given more insight on them, it goes from simple and boring to legitimately shocking and enjoyable to read.  Also, the way the last third of this book plays out should be commended by somehow making all the characters involved feel true, but with a sense of brutality that feels important and not simply there for shock value.

The Bottom Line:  Inconsistent, But Ultimately Sticks The Landing

Going into Wonder Woman: Dead Earth #3, I knew what I was really looking for were answers and there’s no denying that this issue gives them.  What’s fascinating is that these revelations somehow manage to be both disappointing and exciting within the same issue. Even with this inconsistency, this issue hits the mark if for no other reason, then by giving the reader a Wonder Woman moment that could very well go down as being iconic. 3.5 out of 5 stars

Wonder Woman: Dead Earth #3 does everything you want a penultimate issue to do.. It provides answers and revelations on the previous entries and sets up the conflict in the finale. It’s not all good, but the issue turns itself around from a lackluster beginning to a strong ending.
Andy Chouri Daniel Warren Johnson dc comics Mike Spicer Review Rus Wooton Wonder Woman Wonder Woman: Dead Earth
Share. Twitter Facebook Pinterest LinkedIn Tumblr Email
Previous ArticleSavage Dragon #249 Review
Next Article Critical Hit #559: A Slight Change in Plans (VS06-109)