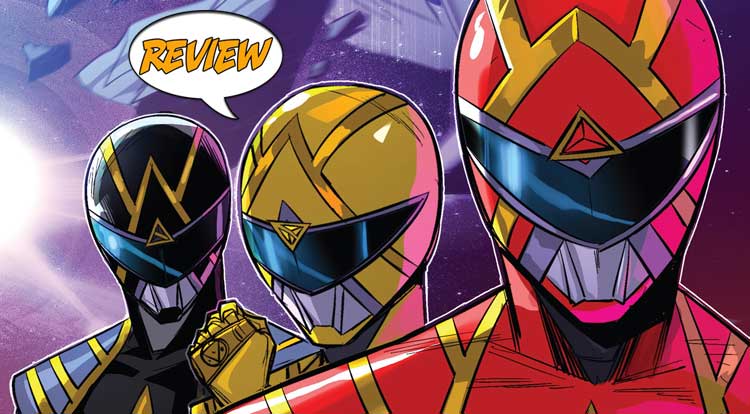 To all things, there must come an end…  and then, because it’s Power Rangers, they will explode. Your Major Spoilers review of Go Go Power Rangers #32 from BOOM! Studios awaits! Previously in Go Go Power Rangers:  Jason, Trini and Zack meet Kiya for the first time on Safehaven to begin their new roles as Omega Rangers! Meanwhile, what will it take for Aisha, Rocky and Adam to prove they’re ready to be the newest Power Rangers?

On a far-away planet, the original Power Rangers (plus Tommy) are embarking on their final mission: Retrieve the Sword of Light before Lord Zedd destroys them all with Serpenterra.  When they return to Zordon, he congratulates them, while Rocky, Adam and Aisha get used to life in Angel Grove.  Outside the Power Chamber, the White Ranger confronts the Red Ranger, with Tommy accusing Jason of being too scared to continue on and running away to Switzerland for the Peace Conference.  It’s a tense moment, but understandable, given that Lord Zedd is determined to bring the Rangers down for good.  Jason, Trini and Zack transfer their powers to the new kids, and secretly head out to space to become Omega Rangers, while the new Red, Yellow and Black Rangers try to acclimate themselves to life as armored superheroes.  As the issue ends, Tommy and his team and Jason and his both leap into action for the big Butch and Sundance freeze-frame ending.

THEY’VE FINALLY RUN OUT OF TIME

This issue being the final chapter of this book is no surprise to regular readers, since GGPR has been taking place in the relative past of the main Power Rangers title, but they’ve caught up to that book’s story.  It’s also nice to actually see this story told effectively, as the 1994 version was pretty abrupt, thanks to half the cast leaving and/or being fired over salary disputes, and this book manages to finally give me the drama, emotion and conflict I wanted.  I appreciate Mortarino’s art, with the long, lithe figure work on the morphed Rangers, but he also makes the emotional goodbyes work for me.  The down side for me comes with a couple of awkward jumps in storytelling throughout the issue, which work against the story, and there are a couple of difficult moments to swallow as Kim and Tommy train the new Rangers, but overall it’s a pretty solid reading experience.

BOTTOM LINE: I LIKE THAT FINAL PAGE A LOT

IN short, Go Go Power Rangers #32 is an above average issue that has to cover a lot of ground and does it with only a couple of small stumbles, showing us a version of ‘The Power Transfer’ much superior to what we got on TV back in the day, earning 3.5 out of 5 stars overall.  It’s a bit of a shame to see this companion series go away, but BOOM! has been doing well enough with its Power Rangers license that I expect that there’s much more to come on the main Power Rangers book.

We finally know how Jason, Trini and Zack ended up as a new team of Rangers in space, and the sliding timeline has made this book no longer tenable, and it's a nice way to wrap it all up.
Boom Studios Francesco Mortarino Go Go Power Rangers power rangers Raul Angulo Review Ryan Parrott Simond de Gianfelice Sina Grace
Share. Twitter Facebook Pinterest LinkedIn Tumblr Email
Previous ArticleMajor Spoilers Question of the Day: That One Jerk Edition
Next Article Legion Clubhouse #77: Those Darn Kids