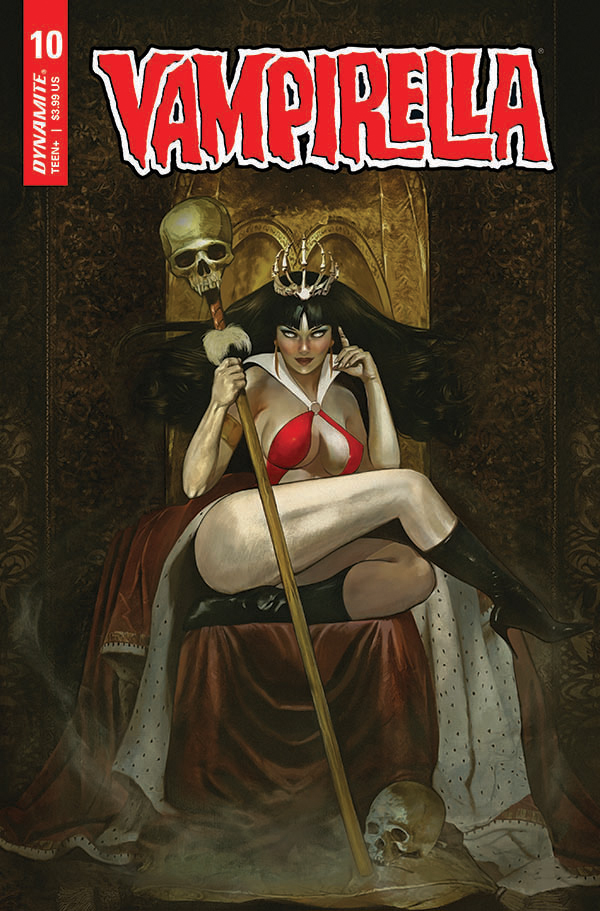 As summer approaches, Dynamite is heating up as the comic industry roars back with its comeback, and is delivering a scorching haul to fans and retailers for July 1st!

To charge up an otherwise slow week of comics releases, Dynamite is bringing its big guns to brighten up the excitement around returning stories and supporting comic shops. Five of the bestselling and best-reviewed titles will all be out the same week.

“Our number one focus at Dynamite since the beginning of the pandemic has been making sure that the return of our titles to stores and to fans is executed as perfectly as we can,” said Nick Barrucci, Dynamite CEO and Publisher. “Not only for the strength of us as a publisher, but more so to make sure that our retailer friends come back strong and fans get excited. We usually do not release two titles featuring the same characters in the same week, such as Vampirella and Red Sonja, but when we saw that July 1st was going to have limited best-selling releases, we wanted to ensure that retailers had our strongest selection of books to sell. We also believe that for retailers this could be the perfect opportunity to have promotions to sell back issues to your fans leading up to the holiday on July 4. We know retailers are going to have a tough week, and we want them to do as well as possible planning in advance. These titles are also available for immediate re-orders to help capitalize.”

As the second season on Prime is set for an official release date any day now, now is the perfect time for fans to dive into the long-awaited sequel to The Boys with the second issue of Dear Becky. Co-creators Garth Ennis (Preacher, Punisher) and Darick Robertson (Transmetropolitan, Wolverine) return with artist Russ Braun, colorist Tony Aviña, and letterer Simon Bowland. The classic creative team is all back years after they concluded the original juggernaut run and they haven’t missed a step. Read the next chapter in what ComicBook.com called “surprisingly soulful, sufficiently savage” and “a comic book capable of delivering both hilarious ultraviolence and a sincere reflection on the cost of committing violence—a contradiction in tone and style that enhances both parts in surprising ways.” Meanwhile, in Vampirella Christoper Priest’s intricate saga reaches a climax, as Vampirella falls to her lowest point. Still recovering from a traumatic plane crash and turbulent personal life, she turns to others for help – and one may be the mastermind who has been manipulating all the events to date… With stunning covers from Lucio Parrillo, Guillem March, Fay Dalton, Meghan Hetrick, interior artist Ergün Gündüz, and more, this is an issue not to miss.

In the flagship of the other big Woman of Dynamite, Eisner-nominated scribe Mark Russell continues to spin one of the most acclaimed series in the industry in Red Sonja. Exploring concepts like power, war and leadership, it has only gotten more enticing moving into its second year with the big war won. What happens next for Sonja the Red?

Across that first year of Russell’s Red Sonja, the titular character lead the rag-tag Hyrkanians against a despotic king. With Red Sonja slaying Dragan the Magnificent in a climactic battle, his surviving son Prince Cyril has vowed revenge on the fiery-haired killer. Alongside co-writer Bryce Ingman and fan-favorite artist Craig Rousseau (Impulse), Mark Russell chronicles that quest in Killing Red Sonja. Spiced with magic, humor and more, it’s an indisposable companion to the main series.

Fans looking for a straight shot of classic comic book storytelling with modern sensibilities know that Vengeance of Vampirella is a true hit. Or they better get on it fast! The multitalented Tom Sniegoski, who has written everything from the Punisher, Hellboy, Bone and dozens of novels, returns to the character he defined for an entire decade. Picking right up where he left off in the 1990s, but incorporating the 25-year absence, this book is comfort food for every longtime fan of the Daughter of Drakulon, and also perfectly approachable for all newcomers.

Dynamite encourages fans to come out on July 1 and show their support for their favorite retailers and publishers!