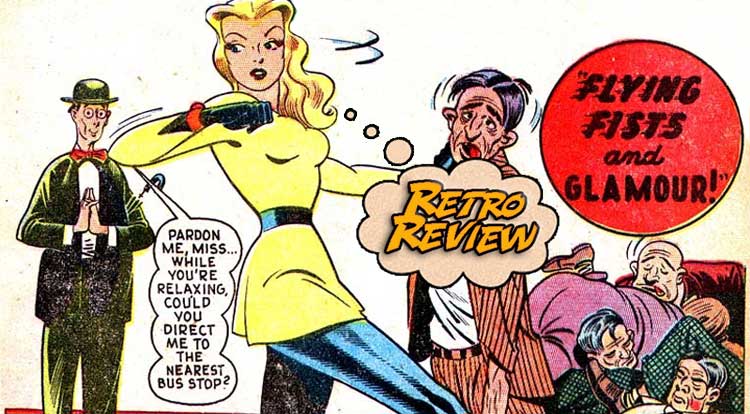 There are many forgotten heroes of yesteryear, but few with a backstory as convoluted as Mary Mitchell…  Your Major Spoilers (Retro) Review of Sun Girl #1 awaits! Previously in Sun Girl:  In the late 40s, after the end of World War Ii, the comic books that had been so incredibly popular a decade earlier were on the wane.  As sales on traditional superhero titles began to sink, publishers branched out to find new audiences.  A proliferation of western titles appeared, along with war, crime, horror and even romance comics.  That last genre was a conscious attempt to appeal to female readers (who made up a large portion of comics readers, both then and now.)  In an attempt to bolster their sales, the company known off-and-on as Marvel Comics leapt onto the bandwagon, debuting a number of female heroes to tap into that audience and their sweet, sweet dimes.  Enter: Sun Girl! Like so many of her male Golden Age counterparts, Mary Mitchell had no origin story or explanation, bursting fully formed onto the page to answer a crime wave with her feminine (but still powerful) fists.  She makes quick work of the robbers and heads for their hideout, where she brings down one of the ringleaders by smashing in his door (!!) with her bare hands!  It’s weird how this comic’s attempts to get away from the traditional comics of the era leans heavily into all their cliches, including a visit to the chief of police with a bunch of trussed-up crooks in tow.  She informs the chief of police that she’s about to make a radio announcement to the rest of the gang that she’s on to them, which…  gets complicated. This issue’s artist, Ken Bald, was a mainstay at Marvel throughout the 1940s on adventures of Captain America, the Sub-Mariner and more, but Sun Girl is probably his highest-profile creation, and it feels like he’s having a lot of fun with drawing her impossibly long legs and Veronica Lake features.  Indeed, the art does much of the heavy lifting in this story as the story (whose writer is unknown to this day) doesn’t make it particularly suspenseful, for us or for Sun Girl. It is fun to see her leap into gunfire and overpower her foe with sheer muscles, though, especially for a comic of this vintage.  Sun Girl realizes that the ambush at the radio station proves that Darwin, the police chief’s secretary, is behind the crime wave and reveals a ton of information that we, the readers, didn’t know about the situation. I have to admit, I like that ending panel, though, presaging Peter Parker’s later balancing of crime-punching and money troubles.  The rest of the issue features Sun Girl fighting monsters, a text story by a young Stan Lee, the last Golden Age appearance of Miss America and an extremely puzzling tale that does a number of whatever passes for continuity circa 1948.  We meet a young man named Johnny who idolozes the hero, but also loves local mobster Nails Nelson.  Little Johnny wants to grow up to be a smart crook like Nails, until Sun Girl shows him the error of his ways… by confronting the thug directly! The puzzling part comes in those last two panels, as we find that Johnny has grown up to be a judge in what is implied to be the modern day, which means that Sun Girl was not only active circa 1928 but had not aged in the ensuing 20-odd years.  It’s a moment that was clearly meant as a throwaway “moral of the story” piece that has instead confused would-be Marvel Handbook writers for more than half a century.  It’s also a reason why Sun Girl #1 has to be considered a poorly written book that leaves Bald’s art to do much of the work, earning 2.5 out of 5 stars overall.  Mary is one of Marvel Golden Agers who hasn’t gotten a full-fledged modern revamp, but at least she has a legacy hero who was (briefly) a member of the New Warriors.  Heck, if she hadn’t recently reappeared as an elderly woman, I’d have theorized that she’s still out there, being immortal and having adventures…

Then again, it’s a Marvel production, they’ve reset the universe at least once since 2015.

It's an interesting comic historically but not a particularly memorable one for its story. The well-done art manages to take up some of the slack, though.