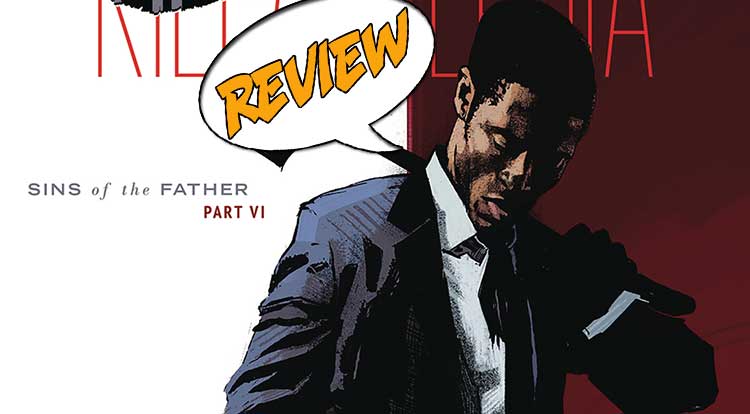 In KILLADELPHIA #6, the plans of vampires and men begin to clash as the authorities mass to take down the vampire menace before they swamp the city.  Will Jim Sangster Jr live long enough to cement his new relationship, and can his undead father fight off his thirst for blood long enough to take down a vampiric former President?  Find out in your next Major Spoilers review!

Previously in KILLADELPHIA:  When Jim Sangster discovers his long servicing Philadelphia PD father is dead, he ventures back to his old home town, full of old bad memories and a whole host of risen ones.  He soon discovers his father was on to something before his death, something that involved vampires, and former President, John Adams!   Soon, the dead have risen, and they thirst for blood!

KILLADELPHIA #6 ties up some threads, but leaves others dangling, as the storyline concludes in blood, fire and more than a few philosophical musings of one of your nation’s earliest Presidents.  Jim Sangster Sr is dead, but he’s never been more alive than he is now.  One of the walking undead, this former Philadelphia police detective is on the trail of the man who has unleashed a horrible tide of blood drinkers, intent on taking over the city then launching out across the great nation he once led.

Told with an almost documentary feel to the artwork, KILLADELPHIA #6 is a satisfying read that allows readers an apt jumping off point, but also gives pointers to the future direction of the series for those eager to find out more.  Things have certainly grown more complicated for the Sangster men – father and son – since the opening issue where Sangster Jr was a very unwilling participant in the mystery of his father’s death.  Since then, though, the calamitous impact of the awakening of John Adams has brought both men together, in an effort to fight back the tide of darkness threatening to sweep the city away.

Rodney Barnes writing is efficient and to the point.  When you’re wrapping up a major storyline, it pays to give the audience the sense that the major mysteries have been unveiled and dealt with.  There’s the visceral impact of the undead beginning to swarm across the city, and similarly, when the authorities bring out the heavy ordinance to cleanse the city of the unholy legions poised to drain it dry.

I especially enjoyed the face off between Adams and Sangster Sr, where Adams laid out a vision of America where the people are at each other’s throats, driven by fear and mutual suspicion.  Only when led by a superior man, a vampire, can the nation be healed.  In these…difficult times in America, the idea that one man, a strong man, indeed, feels compelling, but ultimately incompatible with your rambunctious democracy.  We the people, is the only answer to the ills that ail America, not the false allure of a one man rule.

I especially enjoyed Jason Shawn Alexander’s artwork, which as I mentioned earlier, brings a documentary feel to the KILLADELPHIA #6.  There’s a lot of photorealism in this issue, which can make for somewhat stilted interactions between characters.  It’s not really a complaint, but the artwork felt like it contributed to a staccato style of storytelling, where the reader is treated to images on the page being somewhat narrated by one or two of the characters.  That said, for most of the issue, the artwork is extremely effective, especially in the scenes where the vampires begin their assault, rampaging through tunnels or swarming across the facade of a building.  Couple that with the blood drenched vision of colorist Luic NCT, and you have a comic that very much lives up to its potential, marrying the written work with the images evoked, and bringing it to a compellingly crimson finale.

While not the end of the series, KILLADELPHIA #6 presents a convincing end point.  While the emphasis is on the repaired relationship between the Sangsters, there’s enough violence and action to keep the most bloodthirsty reader satiated.