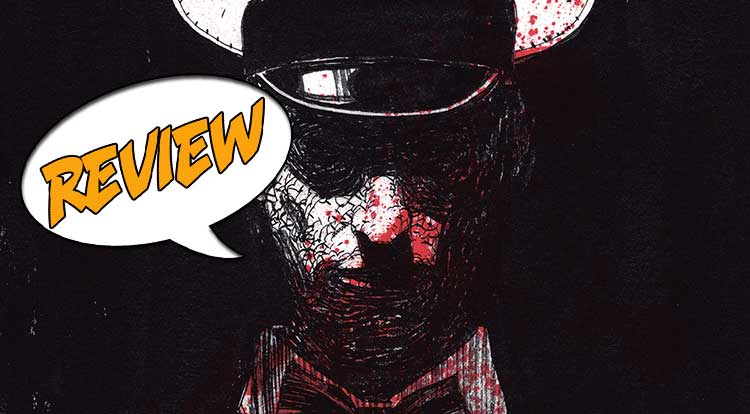 In ICE CREAM MAN #19 Casper the teenage ghost wanders his neighborhood and watches a man leap to his death.  Watch as Casper grows up and fails to live with what he saw.  And watch his final…well, you’ll have to read this Major Spoilers review to find out! Previously in ICE CREAM MAN:  The universe hates you, me and everyone, and the horrors inflicted on the characters reflect that.  Suburbia is an endless nightmare of disconnected people passing each other, oblivious to the vast uncaring universe.  Coincidence, luck, intent and disinterest all war to bring down people and their lives as soon as possible.  And lurking in the background, as ever, is the Ice Cream MAn…

The one animating idea in ICE CREAM MAN #19 is that the world is one big haunted house, and the protagonist, Casper, is a lost soul, floating around inside.  When the world is haunted, there are no good stories, no really happy moments and in the universe of Ice Cream Man, there are, at best, only ambiguous endings.

As I’ve no doubt said before, writer W. Maxwell Prince is something of a genius, taking the base elements of suburban life and making it a sinister proposition to navigate.  Young Casper ventures off, shrouded in a sheet, to examine his failing neighborhood.  He witnesses the banality of a husband and wife arguing, traipses passed shuttered business, discovers a windswept town empty of everyone else, except a man standing on a ledge, ready to jump.

Prince’s use of language through ICE CREAM MAN #19 is considered and packs a punch.  Told mainly through narration, ICE CREAM MAN #19s writing is characterised by sparseness and an unflinching willingness to describe what is happening.  As Casper watches the man expire at his feet, Prince describes the damage thus:  ‘Hear the weird gurgle as blood frees itself from inside his skull’.  When you read that, your perspective shifts.  The banality of those words makes them more impactful.  It’s not, blood poured from his nose and ears – that’s going for the gross out.  Instead, the blood ‘frees itself’ which speaks to something else entirely.

Elsewhere, Prince’s writing takes advantage of repetition to make his alienation from those around him more acute.  His younger self watches the husband and wife argue about farming angora rabbits, and then his older self is confronted by a work colleague touting the benefits of doing the same.  It makes Casper’s life feel like a trap, a constant battle with deja vu, and underscores his inability to escape from the psychic damage that suicide he watched did to him.  Throughout these sequences, there’s nothing unearthly happening (leave that for last), which makes them even more unnerving.

Artist Martin Morazzo brings his trademark sparse visuals to ICE CREAM MAN #19.  He specialises in intense facial expressions, from wide eyes conveying emotion, to lips pouting or being bitten demonstrating fear or unease.  His framing of panels also does some heavy lifting for the story, such as when Casper hears, through his car radio, his teenage voice calling out for help after the man fell to his death.  Casper’s face is cut off just beneath the chin by the bottom of the panel, emphasising his off-kilter reaction to hearing his voice.  The next panel jumps even closer, showing only wide eyes and a furrowed brow.  Elsewhere, images of Casper stressed or watching something upsetting are shown with the image tilted to one side or another.  The world, like Capser’s life, is on the verge of toppling over.

It’s only at the end, when Casper is at last freed of earthly burdens, that the panels become more expansive.  They feel…lighter, less freighted with tension.  Coupled with Chris O’Halloran’s sensitive use of greys through this black and white issue, Morazzo’s artwork tells as much of the story as Prince’s does.

BOTTOM LINE: LIFE IS WHAT YOU MAKE OF IT

I’ve declined to talk about the ending to ICE CREAM MAN #19, as you, the reader, deserve to experience it yourself.  I will only say that it isn’t cut from the same cloth as what you might expect from earlier instalments of the series.  Otherwise, Prince has crafted another unnerving tale which perfectly aligns with the artwork.

A teenager watches a horrifying event while dressed as a ghost, and discovers his adult life is haunted by what he saw. There’s something in that for all of us, I think.