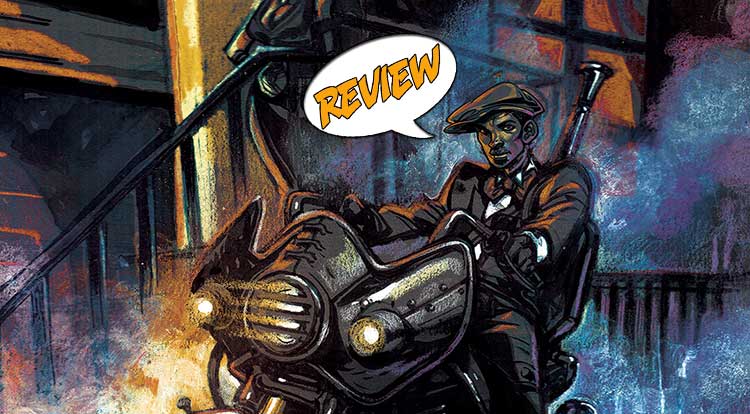 As fear and grief turn people into literal monsters, the Sangeryes find that they can track Adro through Berg. Find out what happens as they venture into the deep south in Bitter Root #8, from Image Comics! Previously in Bitter Root: We learn about Dr. Sylvester’s back story. In 1919, his young wife died. Two years later, during the Tulsa Race Massacre, his two young children are killed. He’s desperate, he’s grieving, and in this state Miss Knightsdale (in her monstrous form) finds him. Beatrice Sangerye and her friend Iris see this, follow them, and capture them, taking them to a small Native American village. With the root treatment, Miss Knightsdale reverts to human, but she is Black – and Black people have never been Jinoo. Back in Harlem in the story’s present (1924), Ma Etta and Berg can feel the change in him, which is the same as the change in Miss Knightsdale. She is not a Jinoo; she is something different. In Georgia, Adro the demon (in Miss Knightsdale’s body) visits the grieving family of a murdered boy and asks them to give up their pain and suffering to her – and she’ll brings their son back.

Bitter Root #8 opens in Harlem in the aftermath of the enormous Jinoo battle from a couple issues ago. Enoch could not get any of the other family groups in New York to help him, so he and Blink are on their own. But they’ve brought in a small group of the local police and shared serum and guns with them. Enoch has two sera – one for restoring Jinoo, and the other for restoring the new creature, the Inzondo. But how can they tell them apart? It turns out that Enoch’s creatures react differently to them.

Then Blink and Enoch head for a club where people have been gathering to be safe, to grieve, to come together through music. Among the grieving are Inzondo, and Blink must go through and inject as many as she can to try to save them. Blink is here because her mother asked her to stay in Harlem, and because she has a feeling that Blink is the one who can save them. She knows full well that the serum only works for a short time and despairs that they can ever figure this out.

Nora, Ford, Berg, Cullen, and Johnnie Ray are off in the family truck to the South. Berg’s link with the other Inzondo will lead them to Adro, or so they hope. Adro is in Georgia because great pain and suffering give him strength, and there is plenty of that there.

Dr. Sylvester is coming to grips with what he’s unleashed on the world, when he is approached by the father of the boy who was lynched. He talks about what happened, how his boy was falsely accused, and this was the excuse for nightriders to burn their homes and kill his son. He wanted his son back more than anything, but now that he’s back, he isn’t whole; he isn’t the son he knew, and we can see it. His soul is not there; it has been replaced. Dr. Sylvester knows this grief intimately, knows the desire for salvation, for something to save them and finally give them respite for suffering. But what Adro gives is nothing like salvation.

The truck breaks down, and it is an education to see Ford talk them through how they need to behave. A case in point – Cullen thinks it doesn’t make sense for them all to go find a mechanic. Ford points out that a sole Black person here will be seen as looking for trouble. The racism of the town of Hopeville is out in the open. I think the hardest part of reading this issue for me was to have it brought home how little things have changed in the last hundred years. But underneath it all, there is a spark of hope, of optimism, that there is a way out if we’re brave enough to find it.

LIVELY AND FULL OF LIGHT AND SHADOW

The art of Bitter Root #8 brings the story to life vividly and with great verve. The scene in the club in Harlem is particularly powerful. At first, we see crowds of people, worn down, in various stages of shock or grief. When the music kicks in, notes fill the background abstractly, but with an underlying structure, like the blues, like jazz. The musicians sing and play with their hearts and souls, and as that community of grief wells up, Inzondo appear. It is gorgeous and heart rending.

Enoch’s pets, resembling a cross between rabbits and dogs, are a delightful and welcome note of humor. It’s honestly fun to watch the police try to figure out how to deal with them, and it’s charming to see Berg (who still speaks in ten-dollar words) interacting with them in the back of the truck. The character work continues to be tremendous, and this issue has so much raw emotion.

BOTTOM LINE: NOW IS THE TIME

Bitter Root #8 hits at a time in our country where there is no better time to fall into this story and watch it unfold. It is intense and deeply emotional, but underneath there is a spark of hope. This is more than a thrilling monster story – it is a tale for our time and all time with a richly brilliant cast of characters.

While Blink and Enoch try to keep things stable in Harlem, the other Sangeryes travel to the heart of the south, where Adro feeds on the grief of the desperate.