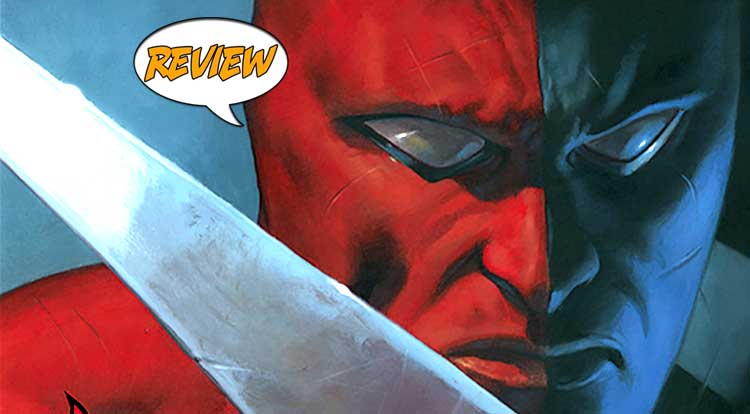 Bart Hill may call himself a devil… but can he face the real thing?  Your Major Spoilers review of Death-Defying Devil #5 from Dynamite Entertainment awaits! Previously in Death-Defying ‘Devil:  The Death-Defying ‘Devil, aka Bart Hill, has done everything he can to protect the residents of the Winslow House from the evil that wants their home.  Will he have to make the ultimate sacrifice to save the people that took him in when he needed help the most?

We open in the Winslow House, where the seemingly immortal Bart HIll has come to stay, with Mr. Tubbins, the keeper and unofficial guardian of the people who come to leave there. He explains his own life and reasons for “hiding out” there, even telling ‘Devil that the people under his roof look up to him as a father figure, but he can’t stand up to the demonic foe that faces them all. By contrast, ‘Devil refuses to back down, believing that it would be a greater sin to walk away than to fight. Cut to the present, as he is surrounded by strange monsters and facing down their hooded tormentor, while another demon tries to coerce the Winslow tenants into betraying ‘Devil in return for their own selfish dreams. While razor boomerangs fly in the courtyard, each of Bart Hill’s friends is offered something to rebuke him, and finally, one agrees… with a catch.

“HELL HAS SENT A BILL COLLECTOR.”

There’s a lot to like in this issue, especially among the non-superhero, non-demon portion of the cast. From the little girl who refuses to let ‘Devil die to save her life to the actress who wants only to be young and beautiful and famous again, this issue is full of characters who seem to have a lot going on. That’s also a bit of a downside, though, because most of them don’t get a full spotlight in these pages (though they did in the previous issues.) On the one hand, it gives Bart’s battle with death and/or Satan some extra oomph, it also makes it clear h ow much we’ve missed and how much is missing from this particular issue’s story. I love the twist near the end and the little girl’s explanation that she knows you can’t bargain with the bad man, because of “that black and white show with the man who smokes a lot.” It’s a nice ending to the issue, one made even nicer by Geovani’s deft use of subtle facial expressions and body language. The shot of ‘Devil lashing out in his final attack is really pretty, as well.

There are a few points where it’s difficult to follow the choreography of the story, and I honestly can’t tell how Bart’s mask would work (it seems to leave his mouth uncovered, but he also pushes it up in order to eat) but even with those questions, Death-Defying Devil #5 brings the series to a satisfying close, with a nice wrap-up of story earning 3.5 out of 5 stars overall. I think that the collected edition will actually help with some of my issues with the story by presenting all five chapters as once, so you may want to look out for that.