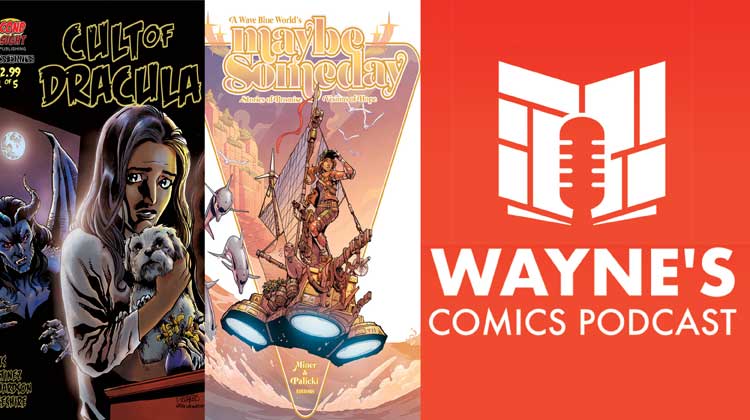 Time for another great doubleheader this week in Episode 437!

It all starts with a great conversation with Rich Davis from the gripping new horror title, The Cult of Dracula from Second Sight Publishing. The book is described this way: “The story re-imagines the classic Dracula myth within the confines of a Manson Family inspired cult. It’s witchy. It’s wyrd. It’s Helter Skelter within a hippie cult dedicated to an ancient blood goddess. You may know Bram Stoker’s genre defining classic by heart, but you have no idea where Cult of Dracula will take you! It explores vampire the mythologies of many different cultures from all around the world and throughout human history. The book is as much about pagan cults, the occult, and pagan culture as it is about vampires.” We discuss the series, how you can access it, and what we can expect in the months ahead!

Then everything wraps up with the return of Tyler Chin-Tanner from A Wave Blue World! He has a Kickstarter happening right now to support Maybe Someday, a positive new anthology, so we talk about how this collection was created, who some of the talented people behind the stories are, and what Tyler has coming! Here’s how Maybe Someday is described: “MAYBE SOMEDAY: STORIES OF PROMISE, VISIONS OF HOPE is a full-color anthology featuring over 25 inspiring stories about a brighter future. It is also the sequel to the New York Times-featured and Ringo Award Nominated anthology, ALL WE EVER WANTED.” Be sure to support this terrific project after you listen to this episode!