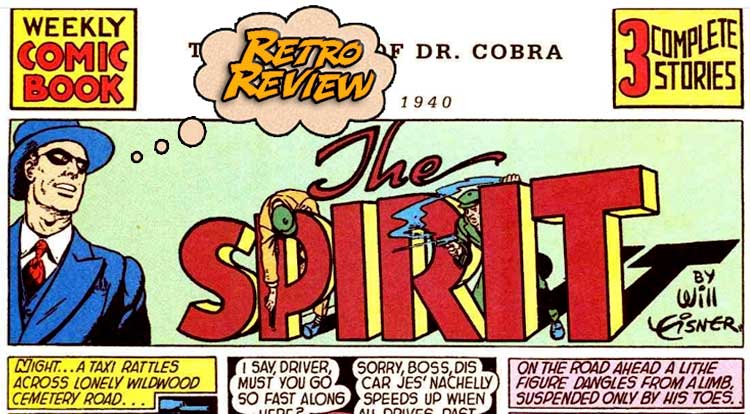 80 years ago this week, one of the most important and transformative comics ever made its debut…  It just wasn’t in the pages of a comic book.  Your Major Spoilers (Retro) Review of the very first Spirit Section awaits! Previously in The Spirit Section: In the spring of 1940, Everett Arnold, the publisher of Quality Comics, began a push to expand his comic book empire into the newspaper comic strip sections, all the better to capitalize on the popularity of superheroes.  According to Will Eisner, Arnold approached him to create the section, designed to be a direct competitor to the Chicago Tribune Comic Book, an insert that paved the way.  Eisner agreed, with the caveat that he wanted to maintain some sort of ownership over the completed product, selling off his share in the Eisner/Iger Studio (a successful comic book packager, producing comic book product for publishers who wanted in on the burgeoning comic book industry), Eisner set out to create his vision… We begin with PI Denny Colt visiting Commissioner Dolan of the Central City Police Department to inquire about the status of an excaped prisoner, one Doctor Cobra.  Denny is already wearing the trademark blue suit that Eisner envisioned for the character, but hasn’t yet adopted the mask that Arnold would insist he add to more clearly identify him as a comic book mystery man.  Setting out to get the reward for Cobra’s capture, Denny ends up in the sewers beneath the city, but is surprised by Doctor Cobra’s speed and physical strength.  Thus does The Spirit lose his very first fight, ending up doused in a strange liquid. Dolan mourns the loss of a promising young man, is shocked to find a mysterious man calling himself The Spiriti in his office, insisting that he will now be taking up the hunt for Cobra.  Dolan’s no dummy, though, and immediately recognizes the voice of Denny Colt, even summoning the elderly coroner to verify the state of the late Mr. Colt.  Dolan races to Wildwood Cemetery, where he finds the shadowy vigilante interrogating a couple of criminal goons. The chemical mixture merely threw Denny into a state of suspended animation that mimicked death, and when he awoke, he realizes that being “deceased” could be an edge in the fight against crime.  Dolan and The Spirit make their way to the waterfront, where the terrified gunsels are reporting to their boss what happened, with the not-so-good Doctor realizing that his fluid works, allowing him to get the drop on The Spirit. I’m amazed at the level of detail and menace that Eisner can impart in these small panels, especially since the vagaries of newspaper printing would absolutely mean the loss of some details.  Indeed, it’s a more photo-realistic style than what we’d come to see from The Spirit, but the seeds of what this title would become are clearly here, especially in those last four panels.  The Spirit makes short work of Doctor Cobra’s goons, and chases the villain down, nearly stepping into another ambush, but Commissioner Dolan saves his bacon. With the villain defeated (at least for a week, since the June 9th edition is entitled “The Return of Doctor Cobra”), The Spirit tells Dolan that he’s going to keep up being dead, allowing him to find and punch crime that police or private detectives could not, with  Dolan grudgingly agreeing to help.  For my money, even though this first Spirit Section for June 2, 1940 isn’t quite the transformative experience that later installments would become, it’s clear that even a young Eisner is a truly visionary creator and the art is stellar, earning a full-on 5 out of 5 stars overall.  The Spirit Section ran weekly through 1952, with the character returning in comics as recently as 2017, making this a deserved long-lived property, one that fans of comic art should absolutely check out.

It's not quite the legendary Spirit that people gush about, but it's got the clever dialogue and detailed, moody art that would evolve into that.

This is a pretty perfect hunk of comics.