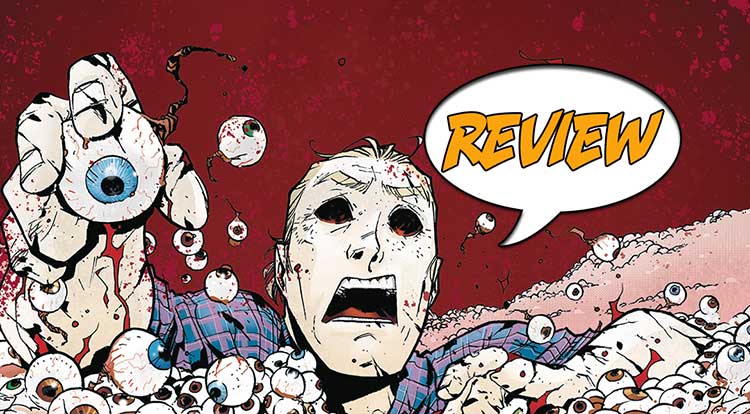 In NAILBITER RETURNS #1, a night out for a trip of serial killer fans turns ugly as Alice, the daughter of Buckaroo’s most infamous murderer defends her family’s honor.  Elsewhere, a multi-car pile up reveals the body of a man long thought dead…with his eyes missing.  Bad things are brewing in Buckaroo so be sure to find out what in your next Major Spoilers review!

Previously in NAILBITER RETURNS: Buckaroo, Oregon, has a knack for producing serial killers.  Sixteen, at last count.  The most notorious is a fine fellow who goes by the moniker Nailbiter, since he chews on the nails of his victims.  Captured in the previous series, his daughter Alice now must live down his (and her) reputation. With the aid of NSA agent, Nicholas Finch, a new adventure begins…

I was fascinated by serial killers when I was younger.  Wrote a paper on Jack the Ripper, and accidentally insulted a freemason while declaiming about one of the favorite theories about Jack’s origin.  The fascination has long gone now – how can you when we’re talking about disordered, disorganised monsters who prey on the weak to satisfy a disgusting urge to kill and maim.  It is interesting, though, that in the main, the eighties and nineties fascination with the serial killer seems to have waned.

None of that is evident in NAILBITER RETURNS #1, a follow up to six collected volumes of material that covered an earlier investigation.  This opening issue begins the story anew, featuring NSA Agent Nicholas Finch and the daughter of the Nailbiter, Alice.  A huge car pile up reveals the eyeless corpse of a serial killer, Luha Eliminador, one of the sixteen murderers Buckaroo has produced.

The artwork in this issue is exceptionally strong.  It unflinchingly displays the results of car wrecks and murder, showing the damage done to objects and people, in graphic detail.  There’s also a cinematic feel to it, as if this was a widescreen movie showing all this violence in a loving, almost pornographic manner.  The ‘camera’ lingers, or at least, invites the reader to, such is the lushness of the artwork.  There are nice little touches that remind me of 80s thrillers – Finch’s reflection in a pair of sunglasses, for instance, is pure 80s cinema.  Elsewhere, the character design is strong and distinctive.  Everyone feels grounded and has some heft.  There are plenty of expressive faces, and great use of shadow and light.  Overall, the artwork in NAILBITER RETURNS #1 cannot be faulted.

The set up, with a town that produced sixteen serial killers, is of course, utterly ludicrous.  But the creators, Joshua Williamson and Mike Henderson, have embraced the idea wholeheartedly.  The issue opens up with three women talking about their favorite serial killer movies and television shows and books and podcasts, while sitting in a serial killer themed bar.  There are flashes to the activities of some of the killers, including the bone collecting Crossbones Killer, or the poor driving skills of the Clown Car Killer.  It’s so delightfully demented your laughing too hard to realise there’s a bit of death glorification going on with it all.

To be honest, I’m a bit leery of it all.  In a way, the artwork is so good when these images are splashed across the page it feels a little like these monsters are the heroes of the issue.  Obviously, they’re not, but still…  My misgivings aside, the writing in this issue is really strong.  There’s a neat framing device that is eye watering (literally), that has a big payoff on the final page.  Alice is a good, strong female character, in a genre that generally treats women as victims.  As you would expect of a woman whose father feasted on his victims, she’s tough and cynical, prepared to face headon the legacy of her father’s monstrosity.

Finch feels much more familiar – the stepdad with a heart of gold, but also a hardened professional who has seen, and done it all.  A story like this needs an anchor character like that, someone around whom the action can unfurl while doggedly chase down the bad guy, often pulling everyone’s chestnuts out of the fire at the last minute.  Again, a typical 80s action hero, updated to more modern sensibilities, of course.

There’s a lot of intriguing material in NAILBITER RETURNS #1.  Some of it your reviewer is a bit wary of, but not so much that I didn’t enjoy it all.  The artwork is fantastic, with lots of cinematic touches to treat the reader.  While there are some odd moments during the issue, which points to some more odd occurrences to come, overall, it’s a familiar tale told really well.