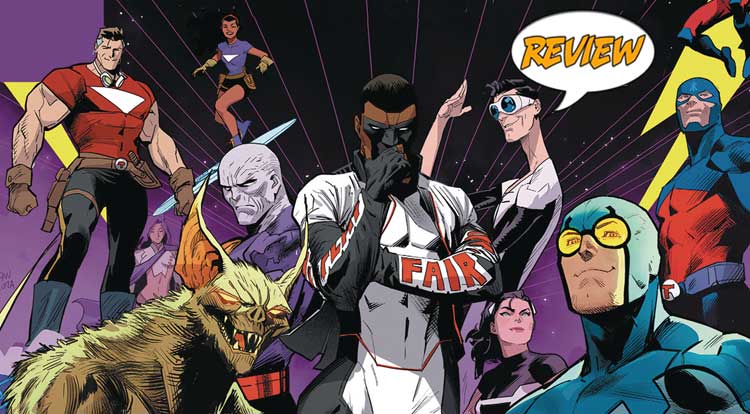 The T-Council has arrived to save the day.  If only Mr. Terrific had told his OTHER team about them.  Your Major Spoilers review of The Terrifics #27 from DC Comics awaits! Previously in The Terrifics:  Scientists of the world unite!  When Simon Stagg sabotages Mr. Terrific’s latest world-changing invention, reinforcements are needed.  Enter the Terrific Council: Blue Beetle! The Atom! Man-Bat! Shay Veritas! Dhalua Strong!  (Just hum a theme song in your head, it’ll be more exciting that way.)  Looks like Michael Holt has been building a real path to progress behind the backs of his Terrific comrades… but the real question is, what else is he planning?

THE SMARTEST HEROES IN THE DCU (AND PLASTIC MAN!)

With last issue’s cliffhanger leaving our Terrific foursome at the mercy of a horde of subterranenan monsters, this issue opens with the metaphorical cavalry: The T-Council, assembled by Mr. Terrific to assist him build a better future in ways that superheroes can’t.  Of course, they’re still quite capable of kicking butt, since their number includes Tom and Tesla Strong, the Man-Bat, Blue Beetle and The Atom, as well as Drs. Silas Stone and Shay Veritas.  They make short work of the attack, but realize that one of the creatures is Plastic Man’s son, Offspring, mutated into an inhuman form and choose to follow him back to his leader (against the wishes of his very upset dad.)  The teams split up, with the T-Council seeking out other victims of the monster plague while Mr. T’s team finds Simon Stagg… and something much, much worse.

I HAVE MISSED THIS BLUE BEETLE

The explanation of why the T-Council exists is a pretty neat one for me, fitting Mr. Terrific’s reputation as the third-smartest man in the world, and the drama here is sound.  Metamorpho wants to save his horrible father-in-law, Plastic Man wants to save his son and everyone wants to save innocents, leading to the big reveal (that’s probably not much of a surprise if you’ve read the solicitation copy.)  Sergio Davila’s monsters are impressively gross and full of body-horror, though occasionally his facial expressions cross over into cartoony.  The battle sequences are also nice, and the storytelling throughout the arrival and introduction of the T-Council is quite good as well.  My biggest complaint with the issue comes in the use of Silas Stone and his constant squabbling with Mr. Terrific who, to his credit, doesn’t take it lying down.  Even so, it feels counterproductive and unnecessary, making Silas seem like a bigger jerk even than Simon Stagg.

In short, The Terrifics #27 brings in a whole new team and makes it all work, providing clear storytelling and easy-to-understand motivations (at least for everyone not named Simon or Silas) with an ending that is tragic but clearly sets up for some fascinating things to come, earning 3.5 out of 5 stars overall.  This book is playing a long game, but it’s a game that these creators have worked for and earned, and I’m happy to see it all continuing.

This is a solid issue of comics, with some fun interactions and an ending that feels like the final chapter... but thankfully isn't!