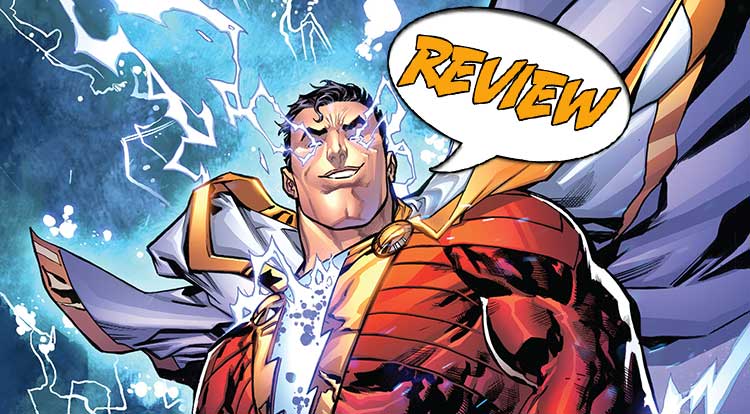 It’s a “special guest” issue for SHAZAM!, with a great fill-in story starring a team up with the Dark Knight and a crocodile in a business suit! Check out this review of SHAZAM! #12 from DC Comics. SOLICITATION: Batman guest stars in a special team-up interlude issue! In pursuit of new villains to thwart, Shazam heads – where else? – to Gotham City, landing him face-to-creepy face with the Scarecrow! Can Batman help Billy overcome his greatest fears

Looks like Geoff Johns and company were busy with The CW’s new Stargirl series, so a team of fill-in creators tell a story that actually is quite a stand-out, fun tale!

It’s often said that the villains are the ones who make a hero. For instance, if a Disney movie doesn’t have a challenging baddie, the good guy or gal just doesn’t look quite as “heroic.” That’s part of the discussion going on in this book as Billy starts out fighting—yes, you read that correctly—a crocodile in a business suit. This prompts one of the Batson bunch to tell Billy that he needs better villains even though this baddie is very true to the SHAZAM villains. When he’s told that Batman has the “best” rogues’ gallery, he heads to Gotham and encounters the Scarecrow, who is expecting the Dark Knight to show up instead of Shazam!

Of course, the Scarecrow hits Billy with his fear gas, and it causes him to face his deepest fear. While what this actually is doesn’t really surprise me because Billy is still a young boy, it does set the groundwork for a very touching conversation between Batman and Billy in which the Dark Knight gives some very wise instruction to the young Batson, something that encourages him to continue on as a hero. Nice job!

As a big Bat-fan, I’m always interested to see how different writers tackle Batman. This was one of my favorites in recent appearances. He’s still the Dark Knight, of course, but he doesn’t rake Billy over the coals when he could have failed and put Gotham in serious jeopardy. Instead, he counsels him, and what he says is actually some stuff I want to remember. There’s also a fun moment at the end when Billy figures that Batman only teams up with Superman. I liked that a lot!

The dialogue is true to the characters, and the pacing moves along very well. I wouldn’t mind seeing more from Mr. Loveness since he nailed both Shazam! and Batman spot on!

Not everyone draws Batman well, I feel. Sometimes he’s too abstract, and other times he’s too realistic. The art here is a perfect balance between the two, with Batman as mystical as he needs to be to face Scarecrow, yet as real as he should be when talking with Billy. I’ve always like Mr. Peterson’s art, and this is an excellent example of him strutting his stuff!

As I always say, I assess a comic’s art on two levels—facial expressions and action sequences. I liked both Billy and Shazam’s expressions, particularly when the latter is under the influence of the Scarecrow’s fear toxin. At the same time, that sequence also was a very strong one when it comes to showing Shazam crackling with energy. It really was a pivotal part of the issue, and it showed that both aspects were powerfully done in this issue.

One of my biggest concerns with team-ups is that one person can seriously overshadow the other, stealing the spotlight when it works best when shared. In this issue, I loved the balance between the two heroes, and I thought they actually brought out the best in each other. On many levels, I really enjoyed this issue! And that’s saying something, coming from a big fan of Mr. Johns!

It was reminiscent of the Keith Giffen/J. M. DeMatteis days in Justice League. The two heroes were clearly different from each other, and that was a good thing! Their humanity was on display, something that we don’t always get from the iconic characters at DC. I liked it!

Shazam! #12 was reminiscent of the Keith Giffen/J. M. DeMatteis days in Justice League. The two heroes were clearly different from each other, and that was a good thing! Their humanity was on display, something that we don’t always get from the iconic characters at DC.
brandon peterson dc comics Jeff Loveness Mike Aityeh Mike Cotton Review Rob Leigh Shazam
Share. Twitter Facebook Google+ Pinterest LinkedIn Tumblr Email
Previous ArticleMajor Spoilers Question of the Day: New Video Game Edition
Next Article Buffy the Vampire Slayer: Every Generation #1 – Review