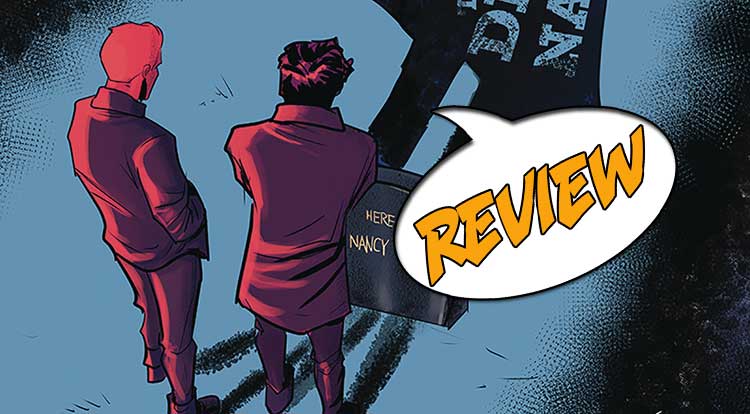 Nancy Drew and The Hardy Boys: The Death of Nancy Drew #1 Review

Nancy Drew’s car wipes out and flips off a bridge. Was it an accident, or is there more to the story? Find out in Nancy Drew & The Hardy Boys: The Death of Nancy Drew #1 from Dynamite Entertainment!

NANCY DREW & THE HARDY BOYS: THE DEATH OF NANCY DREW #1

Previously in Nancy Drew & the Hardy Boys: Frank and Joe’s father was murdered, and the two boys find themselves to be prime suspects! They team up with Nancy Drew in a noir style take on the classic teen detectives, infiltrating a gang and setting up a sting until the murderer is finally revealed.

A DARK AND SERIOUS OPENING

Nancy Drew & the Hardy Boys: The Death of Nancy Drew #1 opens with Joe’s thoughts about Nancy, introducing us to her, as it turns out, at her grave. The unimaginable has happened – but how? He remembers their last case, the success in breaking up an organization known as “The Syndicate,” and her obsession that there was more to it. And then, one rainy night, Carson Drew calls Joe and he heads to the site of a terrible accident where they fish out of the water after a freak accident. But was it an accident? Joe doesn’t think so.

The noir-style take is interesting, and it is a testament to the classic characters that they can be dropped into any number of styles and still work. Joe heads off to a diner for some coffee and some time to think when his brother shows up. Nancy was the one who was obsessed before; now it is Joe, and Frank is worried about him, and thinks he needs to move on.

They part, not on the best of terms. Joe continues his investigations, and this really feels like the opening of a mystery. He talks with Carson Drew. He sees Nancy’s good friends, George and Bess. They reminisce a little, and we get an update on them. While Bess has moved on to college, a sports injury meant George lost her sports scholarship and is still stuck in River Heights. Their town has had an economic downturn, and Nancy’s high school ex, Ned Nickerson, is involved in trying to get a Chinese company called Jinzhan to set up there. It’s a small world – we also see some of the Bobbsey Twins. Their father created the Syndicate, and the rest of the family has become ostracized.

But Joe has his lead – on the night she died, Nancy was with the girls at a karaoke bar. On a hunch, he tracks down security footage to see if there’s any sign that someone tampered with Nancy’s car. He finds a suspect and, on breaking into his apartment, finds him dead. He also gets picked up by the cops, so now he’s a suspect, although they cannot hold him on anything yet. He pokes around the life of the murdered man, Lonnie, and tries to track down his girlfriend, Jeannie, but she cannot be found.

This book has a strong feel of the drudgery of detective work, the meticulous following of leads as far as they go and doggedly moving on to the next one. He cannot find Jeannie, but she has a sister, who happens to be the Chief Coroner. Is this yet another dead end?

I think the opening flashbacks in Nancy Drew & the Hardy Boys: The Death of Nancy Drew #1 are particularly effective to set up the story and fill in readers who have not read the previous arc. Sepia toned panels of Nancy from childhood to recently show us her adventurous spirit and sleuthing. A couple pages later, we see a different Nancy, intense, focused and indeed obsessed by the recent dealings with the Syndicate. This is a maturing Nancy, old enough to be even more independent, young enough to still make questionable decisions.

The linework is simple but clear. Characters and their moods are communicated deftly with a focus on just what makes someone look skeptical, sad, rueful. The various settings are often gritty, the mood atmospheric. It’s often rainy. There’s a lot of play with light and shadow, including the striped shadow of venetian blinds. (How delightfully noir is that?) But every panel reminds us that Joe Hardy is going to have to work on this case, and it could be dangerous.

Nancy Drew & the Hardy Boys: The Death of Nancy Drew #1, as a mystery story, is the best place to jump on. It’s dark and serious without being utterly grim, and it showcases how flexible these classic characters are. If you’re a mystery fan, give it a try!

The Death of Nancy Drew #1