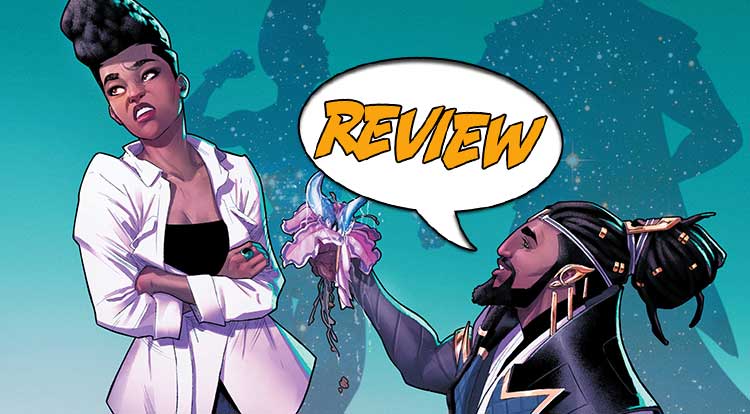 Between growing civil unrest, a murder investigation, and an enamored councilman Lantern Jo has a lot on her plate and that’s all before the past comes knocking. Your Major Spoilers review of Far Sector #6 from DC Comics awaits!

Previously in Far Sector: Tensions in the City Enduring are high as the Emotion Exploit-the mandatory genetic tech that strips citizens of their emotions in the name of peace-is up for referendum.

Far Sector #6 opens up with Jo mulling over the shootings that left 13 protesters dead and the upcoming referendum that could do away with the Emotional Exploit.  She’s then visited by Councilman Marth, the one who ordered the shooting.  Jo realizes that he’s on Switchoff, the drug that turns off the Emotional Exploit. Jo berates him while remembering her own history with police brutality. Marth informs her that he has announced that after the referendum, he’ll be stepping down from his position and will be issuing an apology.  After discussing why Marth uses Switchoff, Jo realizes that she wants a release and sleeps with him.  In the morning she’s alerted by Councilman Nah, who’s been helping her in her murder investigation.  He tells her to meet him, but when she arrives she’s greeted by robot suits that were once used by the aliens that once enslaved and destroyed the inhabitants of City Enduring.

A Lot Of Themes Here

This series has dealt with a lot of different issues.  Things like loneliness, police brutality, government oppression, guilt, atonement, and freedom have all popped up in one way or another, but in Far Sector #6 we get all of these in one book.  What’s impressive is that these various themes all appear naturally, in the course of one conversation. It would be very easy to take a black and white approach to some of these subjects, especially in the case of police brutality and government oppression, but it’s handled here with nuance by giving Jo a history where she is complicit in these. It’s refreshing to see a character be flawed in such relatable ways. Too often we see characters who are flawed in comics but in very dramatic and intense ways, here we see someone who has convictions but also has some simple needs, like companionship.

The Bottom Line: A Timely Comic With A Nuanced Approach

There’s just no way around this, Far Sector is a well-made series that unfortunately will feel too familiar with some of its subject matter. Yet with issue #6 N.K. Jemisin, finds a way to personify these themes in such a way that doesn’t absolve, but shows how easy it is to become a part of the problem rather than the solution. 4.5 out of 5 stars