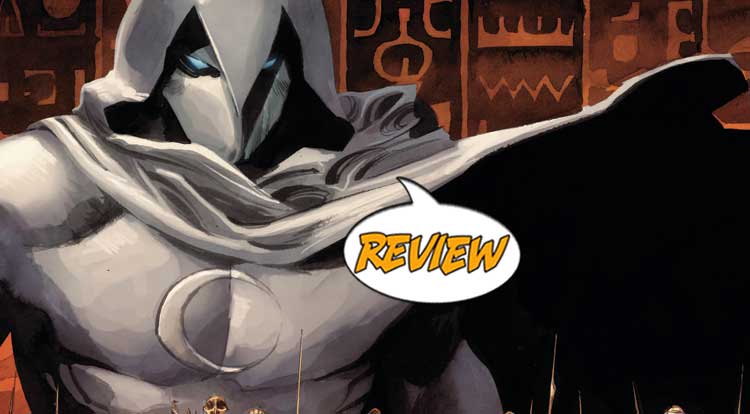 The Age of Khonshu has begun.  Now, The Avengers will fall…  Your Major Spoilers review of Avengers #33 from Marvel Comics awaits! Previously in Avengers:  Mummies are rising from their graves.  Secret armies march by moonlight, from K’un-Lun to Wakanda to Greenwich Village.  A dark god invades Asgard.  And the Moon Knight has been unleashed as never before.  So begins the Age of Khonshu.

So fall the Avengers.

We open our tale in the Himalayas, outside of K’un-Lun, where Moon Knight kneels in the snow, awaiting something… awaiting the arrival of the Iron Fist.  It’s a strange moment, made stranger when Iron Fist arrives and he attacks, giving no quarter to his fellow hero.  “I seek the iron fist,” he says, as he batters Iron Fist unconscious and takes his power.  Then, some time later, mummies attack Doctor Strange in his Sanctum Sanctorum, and a conclave of sorcerors allows Moon Knight to take the power of the Eye of Agamotto.  In Los Angeles, Robbie Reyes awakens, feeling like he’s going to die, as if he’s vomited up his Ghost Rider, only to find his Hellcharger missing.  Then, in Wakanda, The Black Panther meets his foe head-on, choosing the better part of valor and surrendering to an unstoppable foe…  but Moon Knight fails.  “My power is in my blood,” snarls T’Challa, insisting that Moon Knight take him to see his god.  Speaking of gods, Thor returns to Earth from his duties as the herald of Galactus, only to find Moon Knight awaiting him on the moon itself, hurling his hammer directly at his foe, only to recieve a terrifying lesson on history and the power of the moon.

“I HAVE DONE THIS ALL FOR A VERY GOOD REASON.”

This book is a shocker in a number of ways, not the least of which is in seeing the Avengers so quickly and easily outwitted by a foe empowered by Khonshu, but in seeing how it all connects to the ongoing ‘Avengers of 1,000,000 BC’ storyline.  Whatever Spector/Knight/Lockley/Moon Knight is up to, he thinks he’s the last line of defense against whatever is coming next, and while he’s not willing to kill Black Panther, nor can he find the power of Starbrand or The Phoenix, he’s channeled as much energy as he can into his plan to stop the devil (and I don’t think he’s speaking metaphorically.)  It’s a lovely visual issue, as well, with Moon Knight cycling through his previous costumes in each confrontation, ending up in his 90s style white costume once more.  I also appreciate the utterly terrifying way that he defeats Thor in these pages (which you really have to see to believe) and await the internet cries that it’s ridiculous or overpowered or whatever nonsense they’re going to come up with.

In short, Avengers #33 ups Moon Knight’s game to the top of the Marvel charts and gives him several shocking wins in the service of what I hope is going to be a huge, cosmic storyline, with some impressive art and visual touches making it a fast, fun read and earning 4 out of 5 stars overall.  I don’t know where this is going, but this run hasn’t let me down yet, even with some of the weirder twists and turns, so I’m looking forward to what happens next.

It's an issue that surprises on all levels and is clearly setting up for something apocalyptic, and does so with skill, aplomb and a bit of entertaining creativity. I'm really interested in seeing where this goes.