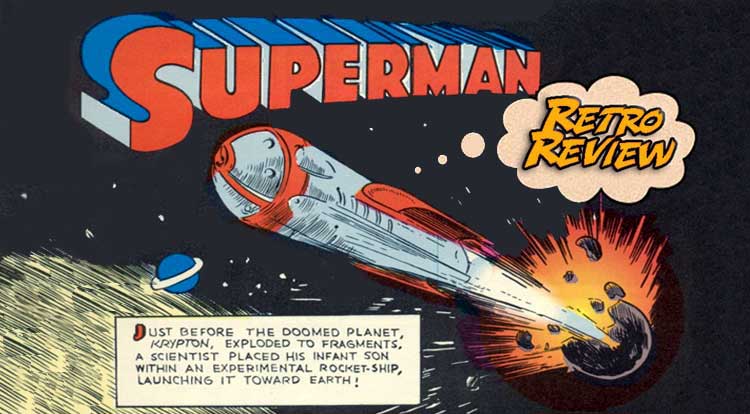 Even non comics-fans know about Action Comics #1.  But are you ready for the first appearance of… MA KENT?  Your Major Spoilers (Retro) Review of  Superman #1 awaits! Previously in Superman: One thing that is sometimes overlooked in the history of comics is how overwhelmingly and immediately popular Action Comics #1 actually was.  Comic books of the era were all multi-feature affairs, probably modeled after the movie experiences of the day, with superheroes presented side-by-side with cartoon features, standard crime stories and even text pieces with real science.  But the success of Action #1 convinced DC to try a full-issue of a single character for the first time.  Also for the first time, we see the details of how Kryptonian Kal-El became Clark Kent… This issue features the first appearance of Jonathan and Mary Kent who…  actually don’t come across as the brightest bulbs in the barrel, as they find a child in what is obviously a spacecraft and figure the babe has been abandoned.  I mean, at the very least, it feels like Allen Funt may be hiding in the bushes.  Though much of this issue is represented from the first few issues of Action, this sequence is new for this issue and expands a bit on his origins and powers. It’s weird, because I remember that sixth panel clearly, but in my head it’s Bruce Wayne standing is his parents’ graves and not Superman/Clark.  (I actually went and scoured through the first few issues of Batman to see if it was one of the things Kane swiped, to no avail.  Just a little Mandela effect, I suppose.)  This is also the point where Superman’s red boots make their appearance, as Shuster had been drawing them somewhat differently in every issue of Action to date.  Once his origin is revealed, Clark Kent heads to the offices of the Daily Star to get a job, but is rebuffed by the editor there.  Insistent that he need a journalism gig to better help people, he sets out to unravel the murder of Jack kennedy.  He quickly discovers the truth about the killer and races to the Governor’s mansion to stop an execution! Superman suddenly switches to his lace-up ballet slippers as we transition into the Action Comics reprint material, and makes his way straight to the governor, where another important bit of super-lore makes its dramatic debut! Joe Shuster is a remarkable artist, standing head-and-shoulders above the quality of some of his peers of the era, but this sequence of panels amuses me, as Superman’s symbol looks remarkably like an ‘F’.  Having presented the evidence to the governmor, “Fuperman” saves the life of an innocent wom and sets out into the night (and also gets himself a job.)  That’s when his editor puts him on a hot new story. Clark sets out on his new job, meets Lois and spends the rest of the issue reliving his adventures from the first few issues of Action Comics, including the puzzling realization that he’s working not in Metropolis, but in Cleveland, Ohio, his creators’ home town!  Another interesting thing about Superman #1 that you might have noticed is the lack of a #1 on the cover, as it was initially created as a one-shot rather than the beginning of a new series.  Obviously, the quality of Siegel & Shuster’s work quickly put it over the top, with DC putting out a #2 in August of ’39, creating a full-fledged phenomenon and not coincidentally earning 4.5 out of 5 stars overall.  The work of these creators is remarable, even compared to other DC books of the era, and it’s easy to see how and why there were (and are) so many Superman knockoffs to be had.

High-quality art and a thoughtful story make it clear why this comic stood out from the pack circa '39.